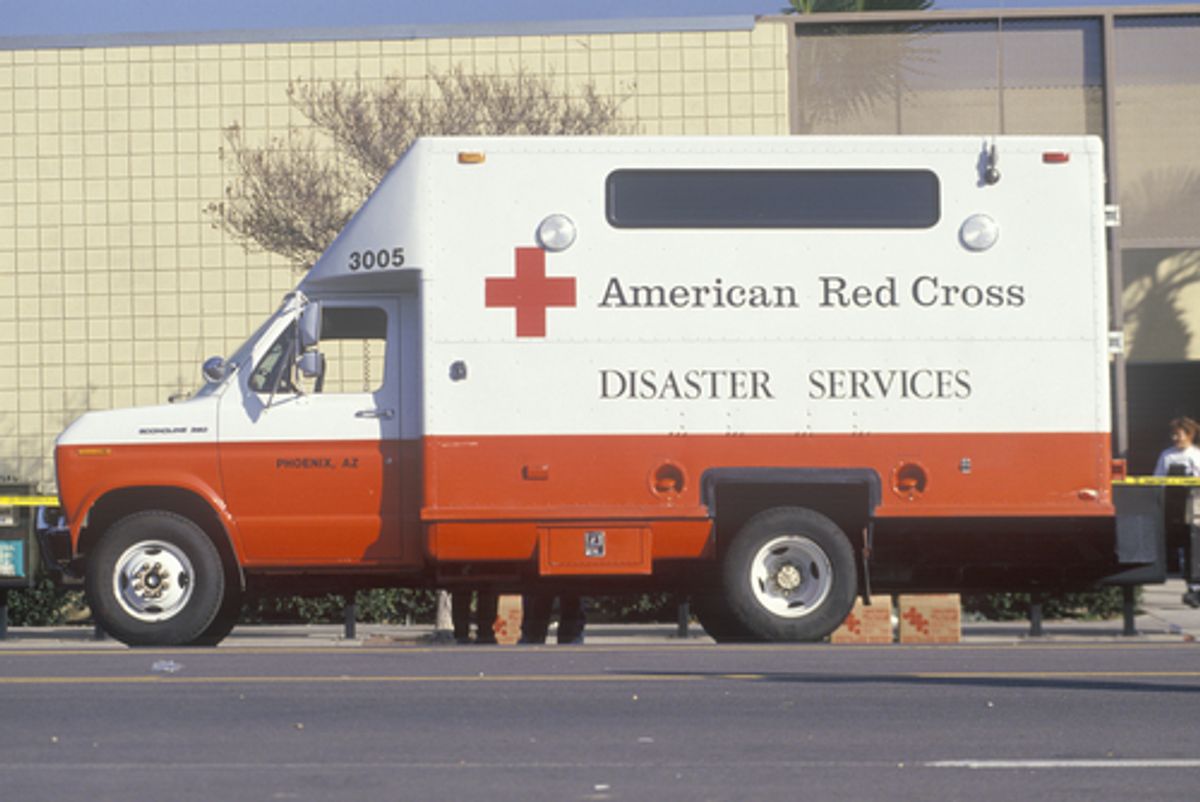 The American Red Cross regularly touts how responsible it is with donors' money. "We're very proud of the fact that 91 cents of every dollar that's donated goes to our services," Red Cross CEO Gail McGovern said in a speech in Baltimore last year. "That's world class, obviously."

McGovern has often repeated that figure, which has also appeared on the charity's website. "I'm really proud" that overhead expenses are so low, she told a Cleveland audience in June.

The problem with that number: It isn't true.

After inquiries by ProPublica and NPR, the Red Cross removed the statement from its website. The Red Cross said the claim was not "as clear as it could have been, and we are clarifying the language."

But the charity's own financial statements show that overhead expenses are significantly more than what McGovern and other Red Cross officials have claimed.

But even that understates matters. Once donated dollars are in Red Cross hands, the charity spends additional money on "management and general" expenses, which includes things like back office accounting. That means the portion of donated dollars going to overhead is even higher.

Just how high is impossible to know because the Red Cross doesn't break down its spending on overhead and declined ProPublica and NPR's request to do so.

The difference between the real number and the one the Red Cross has been repeating "would be very stark," says Daniel Borochoff of the watchdog group CharityWatch. "They don't want to be embarrassed."

Charities are closely scrutinized for how much they spend on overhead rather than programs that serve the public. Studies show that donors prefer to give money to organizations that spend more of their money on services. While there is a debate about the usefulness of overhead spending as a measure of performance, charities regularly celebrate having low figures.

The 17 percent the Red Cross has spent on average for fundraising expenses is below the ceilings set by nonprofit watchdogs. The Better Business Bureau Wise Giving Alliance, for example, says that fundraising expenses should not exceed 35 percent of related contributions.

McGovern, a former Harvard Business School marketing professor, has faced criticismwithin the Red Cross for a focus on branding over delivery of services. ProPublica and NPR recently reported that Red Cross officials on the ground after Superstorm Sandy saw disaster relief resources diverted for public relations purposes. The charity has also been facing deficits and layoffs. As a result, McGovern has been pushing to increase the Red Cross' annual fundraising.

The incorrect 91-cent figure has been used by McGovern in at least four speeches andwritten statements since last year, and other Red Cross officials have used it repeatedlyto potential donors around the country.

After being contacted by ProPublica and NPR, the charity changed the wording on its website to another formulation it frequently uses: that 91 cents of every dollar the charity "spends" goes to humanitarian services.

But that too is misleading to donors.

That is because of the unusual structure of the Red Cross. Most of what the Red Cross does is take donated blood and sell it to health care providers. Of the more than $3 billion that the Red Cross spent last year, two-thirds was spent not on disaster relief but rather on the group's blood business.

The charity spent $2.2 billion on the blood business, most of which went to employee wages and benefits. By contrast, the charity spent $467 million, or 14 percent of total spending, on its famous domestic disaster response programs, including the expensive Sandy relief effort.

Nonprofit experts say that in combining the blood business spending with disaster relief spending, the Red Cross is painting a confusing picture of its operations for donors.

"It probably has the effect of making the Red Cross look better than it actually is," says Jack Siegel, a lawyer who runs the consulting firm Charity Governance.

If the Red Cross split its blood business from the rest of the charity, "their ratios would look worse. So they don't want to do that," says Borochoff of CharityWatch.

The Red Cross manages to hit its 91 cents target with remarkable consistency. Year in and year out, overhead and fundraising costs amount to about nine cents of every dollar spent. That also raises the eyebrows of experts.

"The simple-minded question is: how is it possible with different donations, changing revenues from blood business and different disasters, that every single year it is an average of 91 cents of every dollar spent?" asks Rob Reich, a nonprofit expert from Stanford University. "It seems to fly in the face at the very least of common sense."

Other figures the Red Cross frequently cites also appear to be unreliable.

The Red Cross says that it served 17.5 million meals and snacks during the Sandy relief effort. It has used that number in responses to inquiries from New York State Attorney General Eric Schneiderman.

But multiple current and former staffers and volunteers raise questions about the accuracy of those numbers.

During major disasters, the Red Cross often counts meals that are prepared as meals served, according to 11 people ProPublica spoke with. (Most spoke to ProPublica on the condition of anonymity because they still worked for the Red Cross or feared alienating the charity.) That difference is important because large volumes of meals that are prepared are ultimately not served, but rather thrown out because of poor planning and the chaotic nature of disasters.

One former staffer, from a chapter in Massachusetts says, "The idea that the numbers are based on people getting the meals is ludicrous," adding that "there's no mechanism to report how much is actually served."

The Red Cross told ProPublica and NPR that it stands by its public "meals served" numbers and says it has a policy in place to count them. It provided us with forms volunteers are required to fill out to track meals.

"If we become aware of anyone who failed to follow written Red Cross policies and procedures, we retrain them," the charity said.

But Richard Rieckenberg, a top Red Cross official during the relief effort, says, "The issue is whether or not they were carrying out this policy during Sandy."

"Sandy was different," he says. "I was only asked how many meals were prepared each day and so I began to think that [headquarters was] not interested in the actual meal count." He says that in the early days of Sandy, the wasted meals amounted to 30 percent.

Others were even more blunt. "They just want to know how many meals are made. Whatever they make is the number that gets reported," says an official involved in the Sandy effort to feed, house and shelter people. This official said this had been "business normal" for years.

Red Cross volunteers and staffers say over-counting meals served is commonplace partly because disaster responders are less experienced than in the past.

An internal Red Cross "Lessons Learned" presentation previously reported on by ProPublica and NPR notes that the charity's efforts after Sandy and Isaac were hindered by "lack of trained managers and leaders."

The presentation also says that food waste was " excessive" because of "kitchen manager inexperience," "political pressures," and "poor communication."

One volunteer during the Sandy response says he was "instructed to count every snack set out as served, and we just opened a box, and that was how many were served that day."

"The problem is that it is so hard to count waste. They probably never got an accurate count so they went with what they ordered," says Sharon Hawa, a former Red Cross staffer who worked on feeding Sandy victims.

Hawa says that she still loves the Red Cross, which she described as indispensable. "Whether it's 17 million or 17,000 [meals served], I think as a country we should be proud that there's an organization that can provide that level of care."

Update, Dec. 4: Read the Red Cross' response to this story.