The vote is unprotected, jury system a sham and schools are holding cells. Here's what happens next 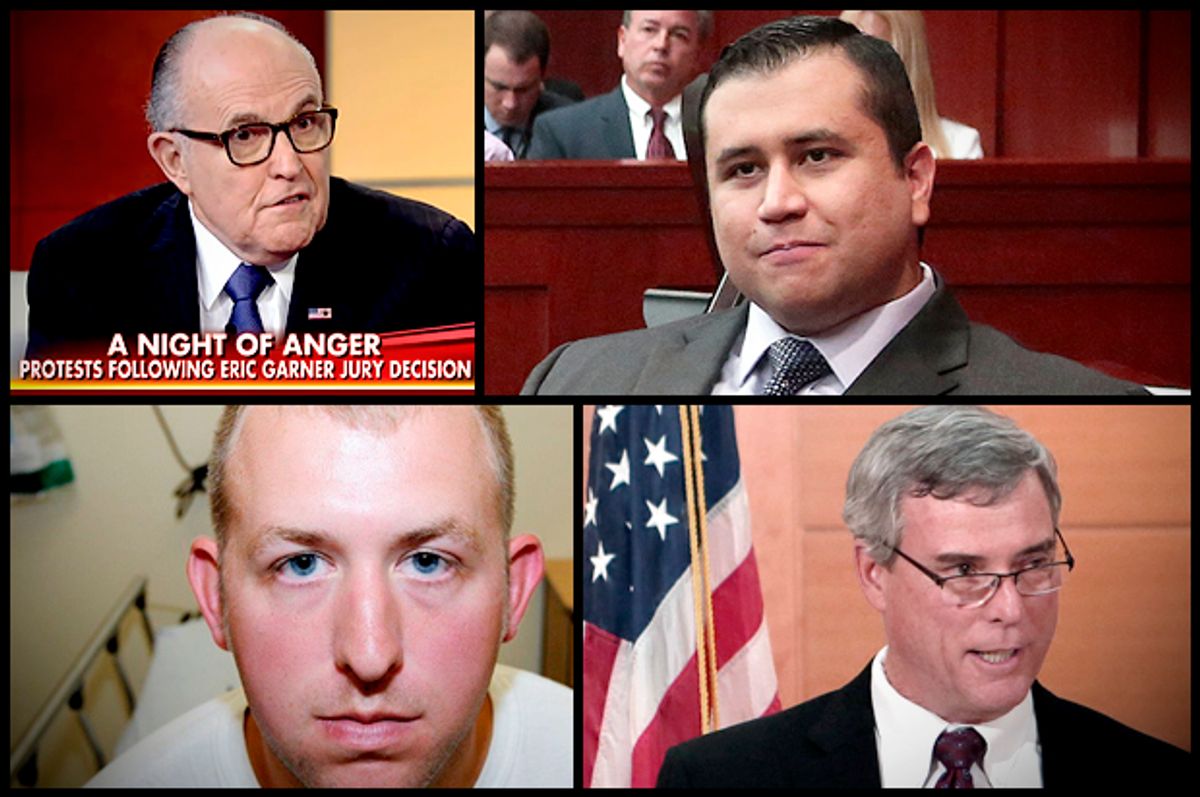 In Staten Island, where Eric Garner was choked to death by a police officer in July, after repeatedly saying, “I can’t breathe,” the Statue of Liberty stands, famously proclaiming, “give me your tired, your poor, your huddled masses, yearning to breathe free.” Lady Liberty’s call feels cruel and perverse, her promises beckoning us into a land of constriction, a land where our yearning is never sated, where smothered promises accompany us unbidden and prematurely into the land of our ancestors.

There is an unparalleled intimacy to racial violence, the sensation of white hands gripping black testicles before excising them from a terrorized, hanging body, the prying eyes and menacing gazes of men who, without consent, undressed the black women who worked for them with both their eyes and their hands, the feel of one’s black neck, being nestled roughly within the crook of a tightening white elbow.

Our collective racial failures devastate us because they are rooted in intimacy, like a lover whispering promises that he never quite manages to fulfill. Beneath all the anger is hurt. Black people deeply desire white recognition of our own humanity. We are not supposed to admit that. Yet, we know that without it, there is no way for us to live. If we did not believe this, the revolution would have happened long ago, when we first realized that white supremacy is a system incapable of loving black flesh.

The weightiness of these matters threatens to suffocate us. The question is now Martin Luther King’s classic question: “Where do we go from here?” More than 120 days into this latest iteration of the movement, we ask what is to be done. The conscience of the people has been raised. Die-ins are being staged every day in a new locale. The constant disruptions of traffic tell us that we will no longer stand for business as usual.

Is it OK to admit that we don’t know the answer to the question yet?

I have this sense that people think the revolution will look and feel like a mashup of a "Top Gun" movie, "Mississippi Burning" and a PBS documentary. People want the feeling of revolution even though they have no idea what revolution is supposed to feel like. We want catharsis. We want revelry. We want battle. Triumph and defeat. Winners and losers. Really maybe we just want the triumph. By now, we are intimately acquainted with losing – our loved ones, our dignity, our faith in the system.

Let me tell you what the revolution looked like for me most recently: a big black brunch with new faces and old faces, all of whom I now call family, in that sense that only black folks by virtue of historical necessity understand. We ate well. We drank liberally. We talked shit. We politicked. We flirted. We danced. We hugged. We felt black, and connected to one another. We were able to experience our blackness as breath and not death. We were and are choreographing unapologetic black lives in a minefield of black death.

Then the very next day, I received text messages and social media alerts that some of the same people in that room were in the midst of staging die-ins, speaking at teach-ins, and shutting down traffic. Our shared meal the day before hadn’t been a planning session. It had been simply an opportunity to refuel the tank before we set out again to do the work that awaits us.

Some forget that in the midst of movements, people still go to work, prepare meals, do laundry, pay bills, care for children, run errands, make love, pray and sleep. Our time together was defiant because in it, we made space for each other to breathe.

I do not know how to reconcile the power of the love we gave to each other in that space with that ever-present desire to force a white supremacist system to acknowledge our humanity, too. We know (yet again, because surely we have known it before) that black humanity and white supremacy are irreconcilable.

Still I do not know where we go from here. But I do know that it is time to admit that we need a new definition of freedom. The old conceptions are dead and gone. The 20th century civil rights project has failed. It has proven insufficient for the challenges of the 21st century.  The vote is unprotected, the jury system is a sham, abortion rights are increasingly nonexistent, and urban public schools have become not training grounds for citizenship but holding cells for underprivileged black youth who learn what it means to exist in a state of social death.

Well aware of the problems, black folks now are demanding answers and solutions. Critical, skeptical black folk and progressive white allies are saying in contemporary parlance: What is the ask? What are we fighting for? What’s the goal now? Where do we go from here?

I don’t know the answer to that question.  I do know we are not the first generation of leaders to ask it. In 1967, in a famous sermon called, “Where Do We Go From Here?” Dr. King reflected on the 10 years since the end of the Montgomery Bus Boycott. Begun on Dec. 5, 1955, the boycott stretched for more than a year, into January of 1957. Ten full years later, King asked his audience:

Where do we go from here? First, we must massively assert our dignity and worth. We must stand up amid a system that still oppresses us and develop an unassailable and majestic sense of values. We must no longer be ashamed of being black.

Back then, the people said, “Black Power.” Today, we say, “Black Lives Matter.”

And second, he said, we must “discover how to organize our strength into economic and political power.” But whereas “this has led Negro Americans in the past to seek their goals through love and moral suasion devoid of power,” it had led “white Americans to seek their goals through power devoid of love and conscience.” And this “collision of immoral power with powerless morality [constitutes] the major crisis of our times.”

Again, we confront the question asked by Booker T. Washington, asked by King and asked by Stokely Carmichael, “How do we procure the power necessary to secure our freedom?” Until we find the answer, we will have social movements.

Finally, King encouraged his listeners to “go out with a divine dissatisfaction.” It is not unlike the “righteous discontent” that famous educator Nannie Helen Burroughs encouraged black women to have in 1901, when she pushed the National Baptist Convention to become gender inclusive in its leadership.

It will take more than one essay, more than one leader, more than four months to figure out where we go from here. Even after more than 10 years, King was still asking that question.  And even though we are still determining direction, we do have consensus on at least two points. One, Black Lives Matter. Two, we cannot go back to the way it was before. And if history is any indicator, our divine dissatisfaction and our righteous discontent are enough to turn the world right side up.