The star talks about body confidence, but most new mothers have a hard time losing weight 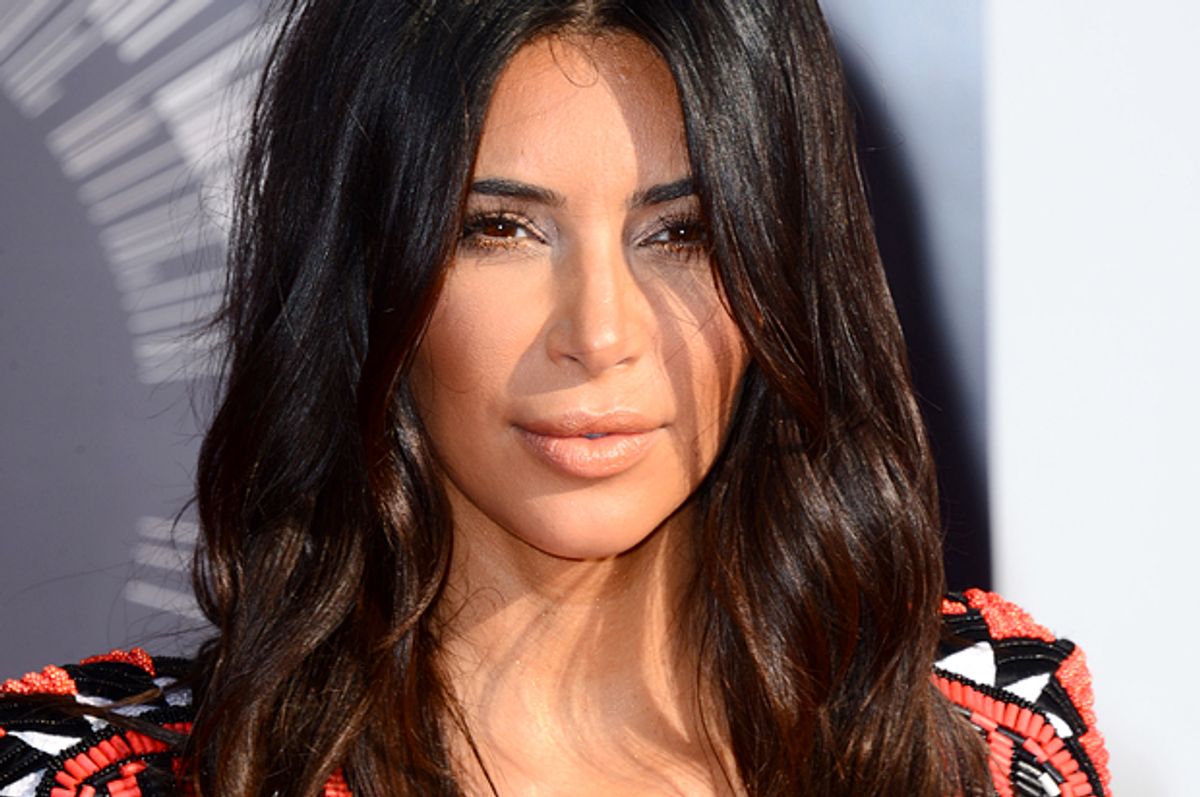 If you believe in God, you might be one of those people who thinks that Kim Kardashian's body is evidence of his existence. Kim Kardashian does!

In a new interview with Elle UK, the reality star and attempted Internet breaker talks extensively about her body confidence, and reportedly reveals that as her famous physique expanded during her pregnancy, she grappled with the philosophical questions. "I'd think God was doing this for a reason," she says. "He was saying: 'Kim, you think you’re so hot, but look what I can do to you.' My body just went crazy. After five months I swore I’d never get pregnant again. I got so huge and it felt like someone had taken over my body."

Of course, like a dutiful celebrity, she swiftly rebounded, appearing on the cover of Us in a white bikini six months after the birth of daughter North last year – and humbly declaring, "I think I still have about 10 pounds to go." But at the time, she admitted, "Everyone was really not the nicest with me when I was pregnant, and in my mind … you lose sight for a second, like, 'Wait, what if I never get my body back to normal again?' I worked so hard to train myself to eat right & healthy. I work out so hard and this was such a challenge for me, but I did it!"

Kardashian, like an army of famous women who follow up the birth of a child with a bikini-clad magazine cover of triumph soon after, clearly now feels that she met God's test and showed him who's the boss. To look at the trajectory of nearly every woman in the public eye, bouncing back to "flaunt it" size is an expected part of motherhood. Yet the reality for most women is nowhere near that. So thank you, Kristen Bell, for bucking the trend and declaring last year after the birth of daughter Lincoln that "I’d like to get back down to where I was before the baby… But if this is where my body wants to be, so be it. I’m not going to make myself miserable for the rest of my life trying to get back to where I was before." And take heart, everybody else.

A new study of low-income women released on Tuesday reveals that as many as 75 percent of those new mothers are heavier one year after having a baby than they were before they became pregnant – and nearly half were bigger by more than 10 pounds. Sustained weight gain doesn't have to be a sure bet for everybody; as study author Dr. Loraine Endres says, "From the moment women conceive, as health care providers we need to start talking with them about appropriate weight gain and remaining active." Yet a changed body – changed for a long time – is the reality for many new mothers, and one that is significantly affected by income. It's a lot easier to get in that bikini when you've got a trainer and a nutritionist and a staff taking care of the baby so you can fit in those workouts.

Our culture slobbers over the image of the hot pregnant woman, then expects her to immediately go back to looking exactly as she did before she had a baby. She's supposed to be impervious to the demands of time and gestation. But having a child is an awe-inspiring, life- and often body-changing experience. It's supposed to be. And if it's a challenge from God, that challenge isn't, "What happened to my hotness and when can I get it back?" Not even for a Kardashian.