Torture and the American exceptionalism crock: A tale of two reports

When it comes to holding torturers accountable, Brazil far outpaces the U.S. 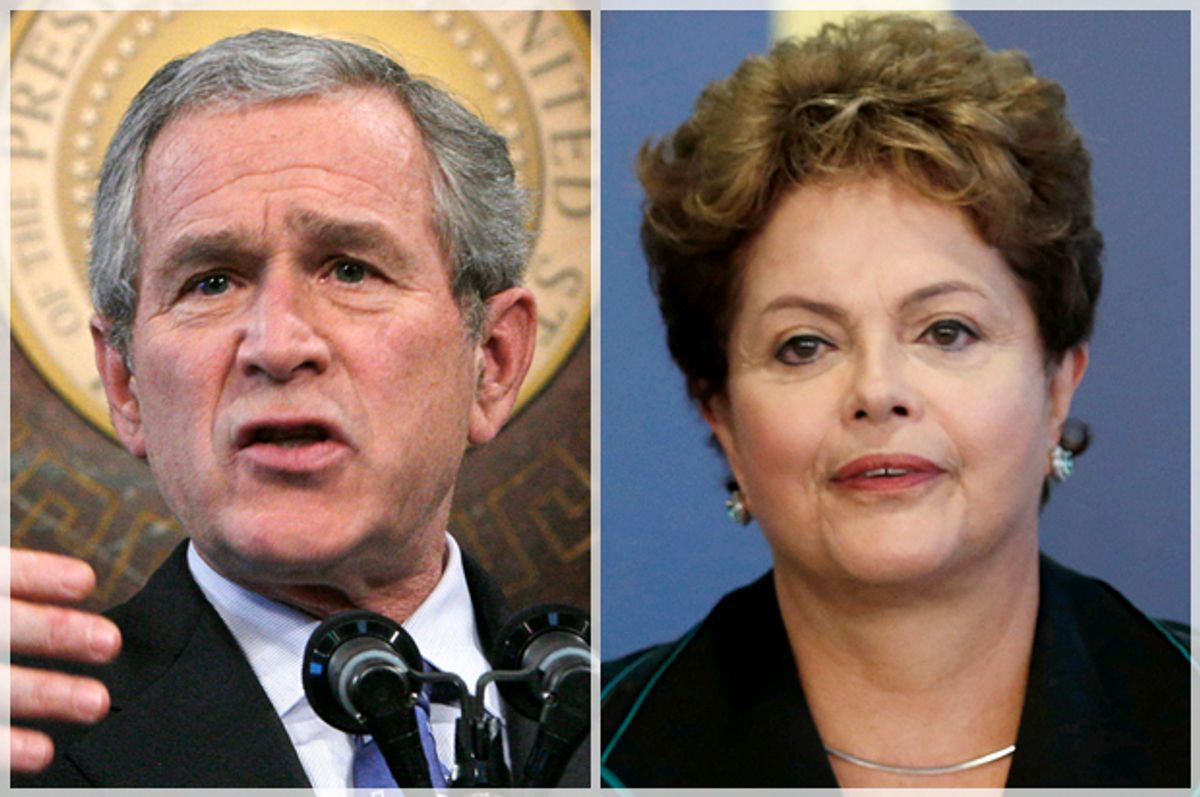 The torture tactics detailed in the executive summary of the Senate Intelligence Committee's investigation into post-9/11 interrogation tactics exposed how the Central Intelligence Agency employed some of the same torture methods for which the U.S. has condemned other countries. But that didn't stop figures from Fox News anchors to Vice President Joe Biden from seizing on the report to laud American exceptionalism.

Asked at a Tuesday summit whether the report marked a "black stain" for the country, Biden answered with an emphatic no. "No, I think it's a badge of honor," he said. "Every country -- every country -- has engaged in activities somewhere along the line that it has not been proud of," he continued.

“Think about it, name me another country that’s prepared to stand and say, ‘This was a mistake, we should not have done what we’ve done and we will not do it again,’” Biden said.

As Paul Waldman noted, plenty of other countries have done precisely that:

Some of those countries have quite publicly and loudly apologized for past wrongdoing. For example, here's the Canadian government apologizing to First Peoples for separating children from their families. Here's the Australian government apologizing for the treatment of Aboriginal people. Germany, which may have more to atone for than any country, has put quite a bit of energy into acknowledging its crimes in World War II. South Africa established the Truth and Reconciliation Commission to fully document the crimes of apartheid.

The point is, it really isn't that unusual for a country to admit that it did something wrong. It usually happens when the particular government that committed the wrongdoing is gone, and the current government doesn't see its survival dependent on keeping that wrongdoing concealed or at least pushed out of public debate. That opens up the space for candor, which is what's happening here, even if we had to wait six years into the Obama administration and the Senate Intelligence Committee released this report without the administration exactly offering its enthusiastic support.

Yesterday brought yet another example -- one that exposes the inanity of the recent paeans to American exceptionalism.

Brazil released its own torture report on Wednesday, documenting the revolting abuses committed by the country's U.S.-backed military dictatorship, which ruled the country from 1964 to 1985. But the Brazilian report did not merely recite a litany of horrors -- electric shocks, forcing cockroaches into detainees' bodies, and crucifying some prisoners on the walls of detention facilities. Unlike the Intelligence Committee's torture report, which redacted even the pseudonyms of CIA interrogators, the Brazilian truth commission report actually named names, the New York Times observes. The report identified 377 people alleged to have tortured regime's prisoners, who included current Brazilian President Dilma Rousseff, a onetime Marxist guerilla. What's more, the report urged the prosecution of those responsible.

A 1979 amnesty law protected torturers and other regime accomplices from prosecution, but the Inter-American Court of Human Rights ruled against the law in 2010. While the law remains on the books, the Times notes, the country may soon see torture prosecutions; in September, an appeals court cleared the path for the prosecution of former military officials accused in the 1971 death of a Brazilian lawmaker, and this month a tribunal approved prosecution of two regime agents in the disappearance of a medical student.

By contrast, the U.S. is unlikely to prosecute those responsible for torture. Not only does the Intelligence Committee's report steer clear of calling for torturers to be taken to court, but President Obama and Attorney General Eric Holder have previously ruled out prosecutions of CIA interrogators.

So while the U.S. torture report has provided occasion for self-congratulation, accountability looks exceedingly unlikely. Brazil, however, is blazing a more exceptional trail.