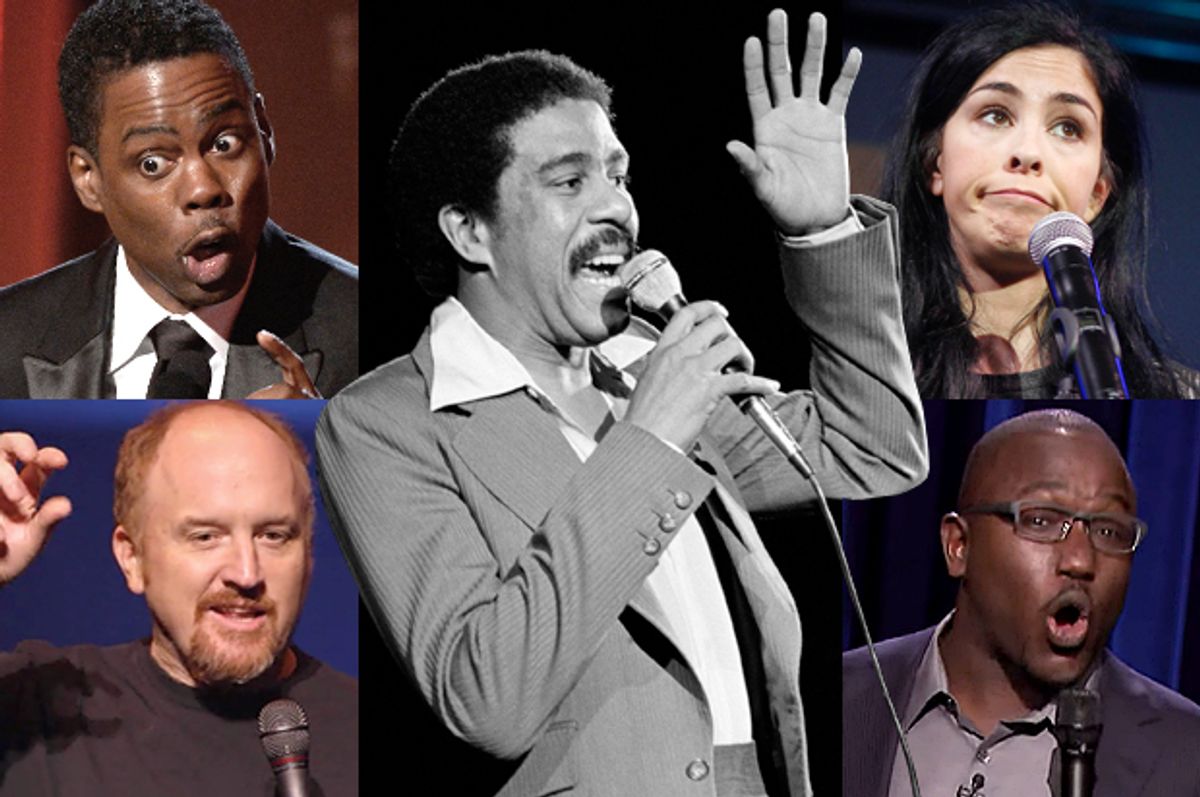 Ask anyone born later than 1970 what they think of when they hear the name Richard Pryor and, unless they draw a complete blank, they’ll gush over movies like "The Toy"; "Brewster’s Millions"; "Critical Condition"; "See No Evil, Hear No Evil"; or "Superman III." They can’t know how close this man came, all on his own, to setting off a revolution.

All alone on a bare stage, Richard Pryor knew about human fear and frailty and reckless desire. He could see into dark recesses of the heart as clearly and cunningly as Shakespeare or Cervantes. Up there in the spotlight he was, in the words of novelist Henry James, “one of those on whom nothing is lost.”

His concert films and LPs are the only archaeological evidence we have. But those who were there to bear witness insist these provide but a pale shadow.

When I spoke with the late David Brenner in May of 2012 while researching the book "Furious Cool: Richard Pryor and the World That Made Him," the first thing he asked me was, “Did you ever see Pryor in person?” When I told him that I’d never had the chance, he groaned as if mortally wounded. “Oh, my God! You missed it, then. There was no one — no one — who could do onstage what Richie Pryor did.”

His four concert films bear this out. And then there are the long silences sometimes on his LPs, followed by explosions of laughter. You, the listener, can only sit and wonder what he might have done to send the crowd into such a roar.

A good portion of our book — and one of the main reasons my brother Joe and I wanted to write it — looks at how Richard Pryor wove his art and worked his magic as a solo performer using materials carried up from the past still current in the Peoria, Illinois, of his youth: tall tales, bawdy rhymes, voodoo conjures, boasts, toasts, cutting contests, and games of the dozens. That is where Richard Pryor’s genius took root and flourished.

What he made of those materials not only changed the rules and erased the foul lines for everyone who came after — and not just in stand-up or TV sketch comedy — but gave new understanding to what went before, making clear the earth-shattering forces incubating within the mysteries of what British author and blues historian Paul Oliver called the “harmless and cheerfully pornographic” oral traditions that gave release to “excess spirits” in African-American communities.

That’s what our book is about. We had not the time or space to ask how Richard Pryor influenced those who followed after him. (Note: The useful question here is how, not who. To ask which comedians Richard Pryor influenced is not a serious question. The answer, of course, is all of them.) Just as every singer who fronts a band and gives him- or herself over to the inspiration of the moment does so under the influence of Louis Armstrong, all the stand-up comedians who came after Richard Pryor do what they do because of him, whether they know it or not.

The impact Richard Pryor had on his immediate contemporaries was perhaps best demonstrated, early on, by Joan Rivers when she was profiled by Life magazine — no small coup for a 30-something female comic in the early 1960s. Rather than keep the magazine’s attention solely on herself, she insisted on dragging Life writer Tommy Thompson and his editor Richard Meryman to see Richard’s show at “some awful place in the Village where you walked down two steps — both literally and socially — when you walked into that club.” It’s easy to surmise, in retrospect, that what she saw in young Richard Pryor (seven years her junior) gave definition, validation, even permission to continue headlong down her own path. It’s easy to surmise because so many other comedians have said much the same thing. Here’s what Joan Rivers said: “It was acting, it was comedy, it was social comment, it was everything … Funny, funny, funny. And sad.” Twenty years later, she still marveled at Richard Pryor’s example. “I do what’s painful for the middle-class woman,” she wrote. “He does what’s painful for somebody who has really lived through pain.”

No matter how self-assured he might appear up there onstage, down on planet earth the pain never let up. Over the next decade, he would remake himself in the squeaky-clean image of Bill Cosby to gain entrée into the lucrative world of TV variety and talk shows; implode under the weight of that deceit onstage at the Aladdin Hotel in Las Vegas; play the bacchanal clubs of West Hollywood while sinking the entirety of a lavish cash wedding gift from the parents of his second (or was it his third?) wife in an ill-fated film he thought would change the world, now lost. So he fled the scene, took refuge in a bare apartment in Berkeley with a typewriter, a turntable and a few books, and immersed himself in Miles Davis and Marvin Gaye. He read the speeches of Malcolm X, wrote screenplays, essays and poetry, and baffled club audiences with animal growls and monosyllabic howls. He rapped and tussled with Black Panthers, Bay Area literati, ranted and free-associated about Nixon and the Attica uprising on Pacifica Radio KPFA.

Having thus schooled himself, as only he could, he returned to L.A., as if down from the mountaintop, just as the stand-up scene was set to explode.

“Once Richard discovered his voice,” Tracy Morgan has said, “the genie was out of the bottle. And he was not going back in.”

“You have no idea what it felt like to see Richard Pryor move through the crowd up to the stage at the Comedy Store in 1974,” Richard Lewis told us one afternoon at Chateau Marmont in West Hollywood. “For a young comedian, it was like seeing God. You watched him and you thought, ‘This man was born to be a comedian.’ He was the most organic comedian I ever saw. It was like he grew up out of the ground.”

Franklyn Ajaye went to the Comedy Store every night over the course of a week in the winter of 1975 and saw Pryor give birth to Mudbone, his most enduring and recognizable character. “That first night,” Ajaye told me, “Mudbone was a nameless old man who spoke only a line or two. But Richard would bring the character out again every night and work on it, building on what he’d done the night before.”

For Dave Chappelle, the epiphany came in 1999, during the filming of "Blue Streak." Martin Lawrence summoned him to his trailer to watch "Richard Pryor Live and Smokin’," a performance filmed at the New York Improv on April 29, 1971, but largely unknown until it came out on MPI Home Video in 1984. “You could literally see a genre stretching,” Chappelle told the producers of Comedy Central’s 2003 documentary "Richard Pryor: I Ain't Dead Yet, Mother@!#%$!" “It was the final evolution of comedy.”

Comedy Central’s John Oliver listened to Richard Pryor’s LPs over and over. “The images he created were so funny, and so raw and honest,” he told Rolling Stone, that “it bore repeat listening … It felt like music.”

“There’s no question ever about who the greatest comic is,” George Lopez says in the PBS documentary "Richard Pryor: Icon." “He never quit, never disappeared.” Even after he tried to immolate himself in the depths of his freebase addiction, he got back up and went onstage to make "Richard Pryor: Live on the Sunset Strip." Lopez says, “In my opinion [it’s] the greatest stand-up comedy that’s ever been recorded.” Lopez showed how much he meant it by headlining and spearheading “A Night for Richard” at the Peoria Civic Center in November. The all-star benefit performance successfully raised the funds needed to cast a bronze statue by artist Preston Jackson to be installed on the riverfront in Richard Pryor’s still-reluctant hometown.

“He never lied to us,” Tracy Morgan says in the same PBS show. “People weren’t comfortable with where he was coming from, but Rich was like, ‘But this is where I’m from. This is what I’ve been through. This is my life. I’m gonna tell it!’ … That’s what attracted me to stand-up.”

Pryor had less-apparent (but deeply acknowledged) impact on authors such as Walter Mosley and Colum McCann, playwrights August Wilson and Sam Shepard, and musicians covering the spectrum from Jackson Browne, Willie Nelson and Kris Kristofferson to Miles Davis and George Clinton, whose 1975 Parliament track “Chocolate City” imagined a day when Muhammad Ali would be president and Richard Pryor the minister of education.

Although he can’t touch George Clinton in this category, Richard Pryor may be hip-hop’s most heavily sampled non-musical artist. Since nearly the beginning of recorded rap, snatches of his stand-up characters and routines have popped up on tracks by, among others, NWA, 2 Live Crew, Chuck Chillout, De La Soul, Sir Mix-a-Lot, LL Cool J, Public Enemy, DJ Quik, Tupac Shakur, Ol’ Dirty Bastard, A Tribe Called Quest, the Beastie Boys, Common and Ice Cube. Mos Def (nka Yasiin Bey) started out doing stand-up, but then “hip-hop happened and it took me away.”

Given that Richard Pryor is credited with single-handedly dragging the wretched N-word into mainstream entertainment — winning Grammys for LPs titled "Bicentennial Nigger" (1977) and "That Nigger’s Crazy" (1975) — it’s tempting to wonder how, or if, hip-hop could have gained commercial dominance when it did had Richard Pryor not broken the ground.

All that changed with the emergence of Richard Pryor.

The only arena where Pryor has failed to wield any significant influence, sad to say, is in the movies. Sad because that was the medium he originally set out to conquer. Some of his earliest memories, he said, were of taking refuge in the darkness of movie theaters, thrilling to the heroics of John Wayne and whip-wielding matinee cowboy idol Lash LaRue. Even then, he would salvage the theater’s discarded movie posters and hang them on his bedroom wall, pasting his name over that of the leading man. That’s where he wanted to be. Comedy turned out to be the best way of getting there.

By all conventional measures, he triumphed.* When it was released in 1980, "Stir Crazy" became the highest-grossing Hollywood comedy to date. Three years later, he was paid a million dollars more than franchise star Christopher Reeve for his role in "Superman III." But if all you knew of Richard Pryor were his blockbuster movies, imagine how baffled you would be to hear Jerry Seinfeld declare him “the Picasso of our profession.” Or to know that the John F. Kennedy Center for the Performing Arts in 1998 awarded him the first ever Mark Twain Prize for American Humor. Or that Bill Cosby, the 2009 recipient of that award, had twice refused the honor only because he objected to the profanity used in the inaugural ceremony honoring Pryor. It’s a complicated story and it goes back a long way.

Like Elvis Presley before him, Richard Pryor sprayed hot sparks of revolutionary brilliance when commanding a live stage with a microphone in his hand, and then squandered it all on a string of lackluster movies that were no match for his genius. As he approached the heights of stardom, he began apologizing to journalists and interviewers for his choice of film roles, saying, “Tell the fans I’m sorry. Tell them I needed the money. Tell them I promise not to do it again.”

In this, too, you could argue that Richard Pryor was a pioneer who broke new ground and paved fresh ways.

* Director Billy Wilder, taking stock of what Hollywood had become in 1982, made the droll observation that studio executives looking for a hit movie “approach it very scientifically — computer projections, marketing research, audience profiles — and they always come up with the same answer: Get Richard Pryor.”