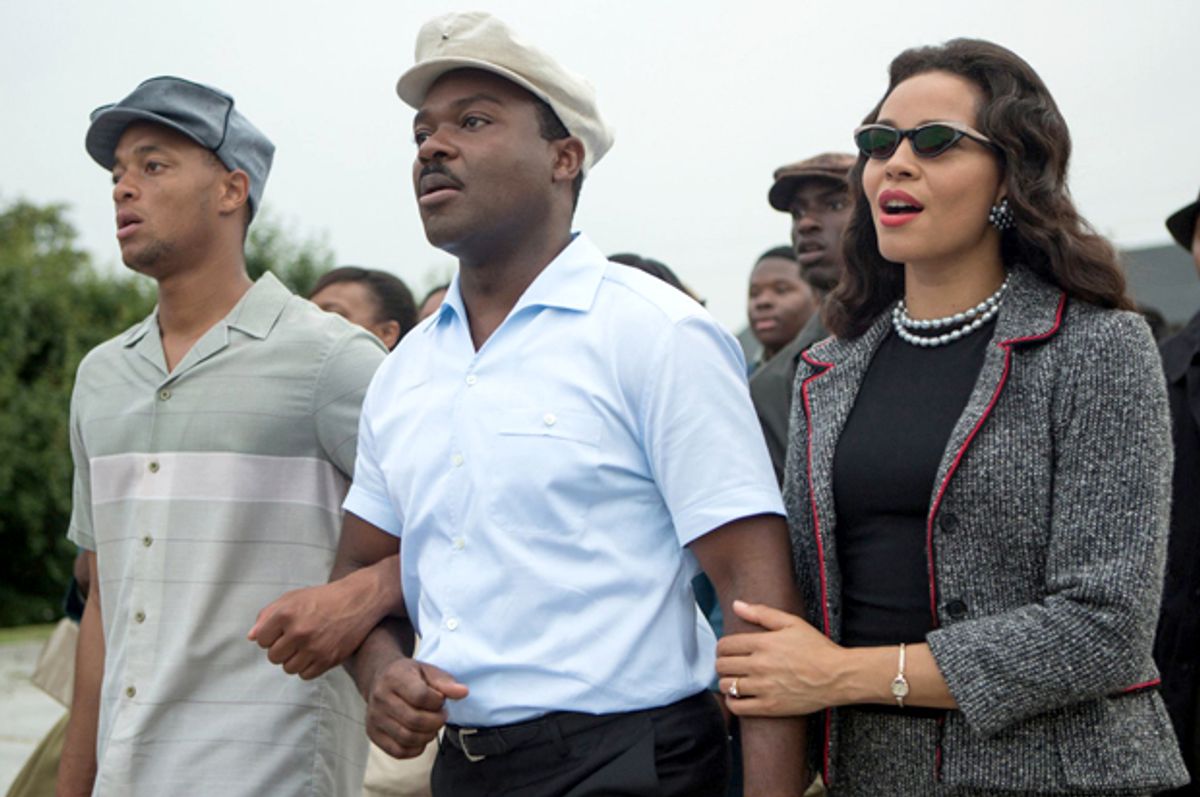 Given the level of difficulty inherent in the material, “Selma” is a much better film than we had any reason to expect. If Hollywood was waiting, consciously or otherwise, for a black filmmaker to come along who could handle this topic, then Ava DuVernay (who spent many years working as a film publicist, and has made only two previous features) was worth the wait. “Selma” is gripping, inspiring and sometimes terrifying historical drama, loaded with specific detail, that brings a turning point of the civil rights movement back from black-and-white obscurity to present-tense urgency. DuVernay cannot have known that her film would be released in a season when fateful collisions between police and black citizens have made the violence on the Edmund Pettus Bridge seems especially relevant, but she makes us feel both how near we are to that moment of national crisis and how far we have come.

In a richly textured and finely balanced leading performance from David Oyelowo, “Selma” also returns Martin Luther King Jr. from sainthood and martyrdom to human scale, without making him seem ignoble. This King is a consummate politician and a bit of a chameleon; if we know him as one of the 20th century’s greatest orators, a preacher of righteousness, we see him here as a back-room strategist, a shrewd operator, and a man’s man with a rocky personal life. It is no longer heretical to acknowledge that King’s marriage to Coretta Scott King (played by Carmen Ejogo) was not the perfect façade they presented to the world. King spent much of his time away from home, clearly put the cause before his family and had several other lovers. The recently exposed letter from J. Edgar Hoover threatening King with exposure and humiliation plays a role in the plot of “Selma,” with the bitter twist that Hoover isn’t telling Coretta King anything about her husband that she doesn’t already know.

Although Oyelowo is both magnetic and hard to pin down in the central role, this isn’t a King biopic but a vertical and historical portrait of a moment. (Its often tremendous photography is by Bradford Young, cinematographer of the moment, who also shot J.C. Chandor’s forthcoming “A Most Violent Year.”) “Selma” probably covers too much terrain to remain fully coherent, but you have to admire its sweep, which encompasses scenes in the Oval Office and the Alabama governor’s mansion, showdowns between King’s mainstream civil rights movement and the black radicals of the Student Nonviolent Coordinating Committee, old ladies trying to register to vote in flyspeck county courthouses, and even a highly uncomfortable conversation between Coretta King and Malcolm X (Nigel Thatch). I briefly wanted the whole movie to be about that encounter, but only because I’m crazy that way. In fact, Paul Webb’s screenplay and DuVernay’s direction come close to the impossible, in capturing how a historical turning point was reached by a bunch of short-sighted people all looking out for their own interests, with at the center of the storm one man and one movement who (as they say) kept their eyes on the prize.

If you don’t know the history of the Selma marches from Selma in March of 1965 – well, it’s almost all in the movie. You don’t really need much of a primer. But here’s the deal: Segregation had been outlawed the previous year, and the white South was still reeling. White liberals all over the country who generally supported equality for African-Americans were generally willing to let things cool down for a while, despite the obvious fact that an entire set of local codes and regulations prevented the vast majority of black people from voting south of the Mason-Dixon line. King and other civil rights leaders wanted to make the point that federal action was required to secure voting rights, and settled on Selma, Alabama – a majority black city with an entirely white government – as the test case. After repeated failures in registering African-American voters, they launched a series of efforts to march the 54 miles of highway from Selma to the state capitol in Montgomery. The first such march, on March 9, was the one when 600 unarmed black citizens were viciously beaten and tear-gassed by state troopers and local deputies, captured in news footage that made Selma infamous around the world.

DuVernay and Webb appear eager not to leave anything out or elide any behind-the-scenes complexities of the Selma story, while also trying to provide snapshots of the leading characters. So while we spend most of our time near King as he plots and ponders, we also see Lyndon B. Johnson (Tom Wilkinson) stewing in his office or conferring with Hoover (Dylan Baker), or notorious Alabama Gov. George Wallace (Tim Roth) nursing a highball before the TV, trapped between Washington, “the Negroes” and the local yokels making his state look bad. If you notice a pattern in the casting of “Selma,” it’s an odd one: In this consummately American story, the four biggest and most charismatic roles – the Kings, Johnson and Wallace – are all filled by English actors. Coming hard on the heels of “12 Years a Slave,” in which the principal actors were all British or Irish, is it time for a little direct action on behalf of American talent? Do our actors really suck so dreadfully they can’t play leading figures from their own history?

I would further argue that the scenes with Johnson and Wallace, although intrinsically interesting, drag down the drama somewhat, and that every minute we’re away from the firecracker atmosphere of rural Alabama detracts from the overall impact. “Selma” ends with the up-with-people conclusion still demanded from a studio film – well, they marched and now there is obviously no more racism! – and for a movie directed by a woman, it seems only half-aware of its gender politics. There are essentially no female characters except Ejogo’s Coretta King, who stands around looking beautiful and pained most of the time. That is no doubt true to the history of the civil rights movement, as to the white left of the time. I suspect that the number of times we see women bustling through the background with coffeepots and plates of food is meant as commentary, but if so it’s rather too subtle.

If “Selma” is limited by the kind of film it needed to be and by what its studio proprietors wanted to sell, it’s still the best and most intimate fictional portrayal of the civil rights movement, by a long shot. DuVernay clearly yearns to make movies that start conversations, not spectacles that sit there at the end of the year like cats on an ottoman, attracting glowing reviews and hardware. Although I imagine she’ll make better films than “Selma,” its best scenes are among the most memorable movie moments of 2014. As she showed in her masterful second feature, “Middle of Nowhere,” she understands the black family, the black home and the internal structure of black life as almost no white person ever could, and she throws open the doors to invite us in.

"Selma" is now playing in New York and Los Angeles, with national release to follow in January.