Bill O'Reilly ruined Christmas: Why his nonsense undermines the holiday I love

With every predictable rant by the human outrage machines, the holiday loses a little magic for me. Here's why 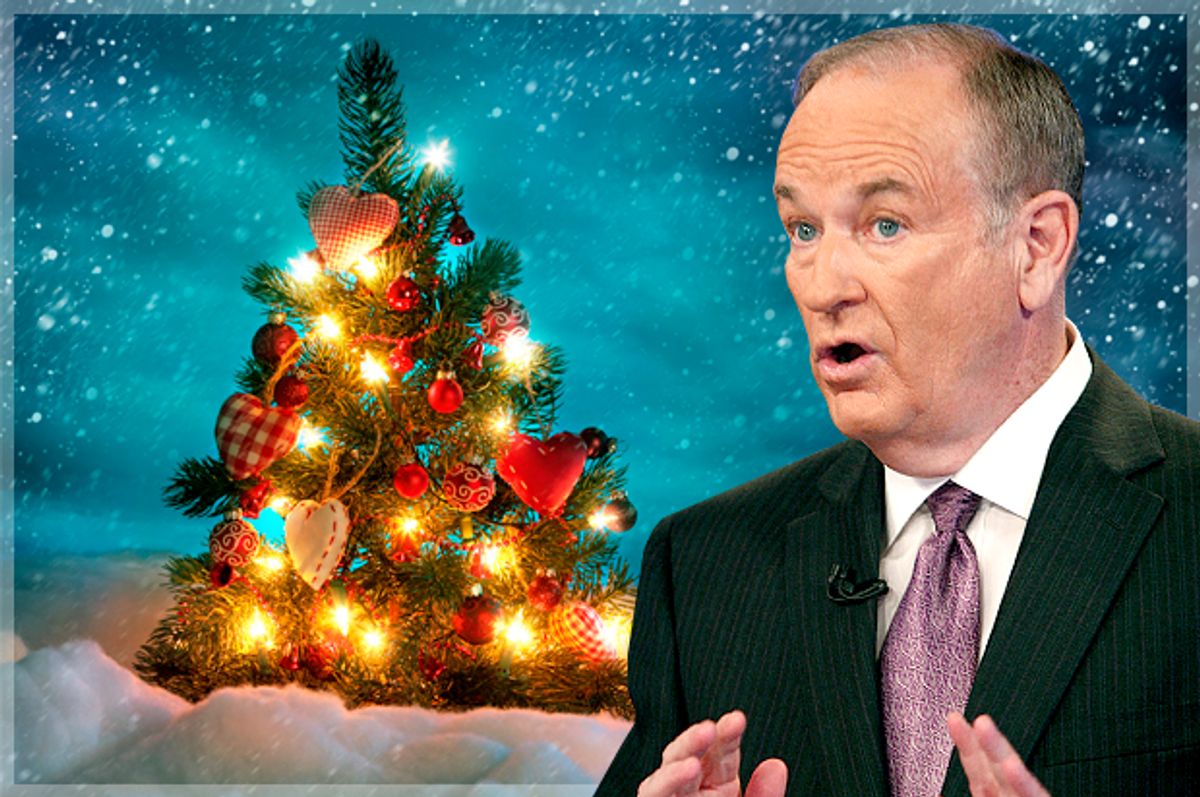 The “War on Christmas” is back, a tradition that has grown as old and stale as last year’s eggnog. It’s become so inane that it’s easy to forget that real feelings and people are involved.  It has become a proxy fight, the Vietnam of the culture wars. The instigators are the Christian right but also politicians who manipulate people’s deepest emotions for votes and the tiniest advantage against political opponents. “Standing up for Christmas” is the same thing as defending apple pie and motherhood. It takes no courage, because none of these things are really “under attack,” but the continuous “War on Christmas” nonsense is driving a lot of the joy out of the holiday.

I used to love Christmas. When I was a child my family wasn’t religious, but my parents put extreme time, effort and money into making Christmas special. There were too many presents, too much food and the entire world stopped spinning for a month so we could participate in community and family activities. None of this involved church, ever, and Christmas carries a great many of my best childhood memories.

One of my most vivid memories of Christmas is of my mother wrapping a gift in plain paper for my aunt, who was a Buddhist. It stands out in my mind, because I knew very few non-Christians as a child. My mother knew enough, even before discussions of diversity were common, to try and give a gift to my aunt on her terms. My mother was careful to avoid shoving her traditions down someone’s throat. To this day it is one of the most beautiful gestures of understanding I remember from the holidays. If people could just hang on to that sense of respect, there would be no fictional “War on Christmas” narrative.

Contrary to the bizarre religious posturing offered by Linus in the classic "Peanuts" special, Christmas is not about Jesus. Not for a sizable minority of us. For most of my life, Jesus has been a bit player. Over the last few years, a cottage industry of Christmas pushers and religious fundamentalists have manufactured a list of penalties and prohibitions to dictate how each and every American must celebrate the holiday. Christmas has become about religious coercion.

In my early twenties, I belonged to an aggressive, fundamentalist church. If someone wished us “happy holidays” we treated it as a chance to “reach out” to the “unsaved.” I don’t think fundamentalists are the ones yelling the loudest about the “War on Christmas,” but rather I suspect it’s the casual Christians who are the problem. They are the people who feel guilty about not being religious enough and who lie to pollsters about how often they go to church. They yell louder and foam at the mouth, but in the end are some of the least committed and most hypocritical members of the faith community. That is why they need Christmas. If their houses aren’t lit up like, well, a Christmas tree, then someone might notice their lack of any other outward religious observance.

The fear of a waning Christmas is of course preposterous. Have you stepped outside? Turned on the television? The holiday is a bloated, shrieking testament to excess, ever encroaching on other holidays like Thanksgiving and Halloween. When every street stops looking like the inside of Santa’s colon, people can start to worry.

But this needless sideshow creates real problems. When people feel coerced, they react in unpredictable (and sometimes hilarious) ways. No one has been as gratuitous as those wacky “Satanists.” I like to describe them as wacky, because I think there are few people who actually worship that fictional, red-coated being (I mean Satan here rather than Santa). There is nothing as effective or more disquieting than a statue of Baphomet sitting next to a nativity scene on a courthouse lawn. The compelling points made by this fringe, eye-poking movement shows just how asinine the very conversation has become.

When vast numbers of the public are drafted into the culture war, someone is making money off it. Perhaps those puppeteers seek votes or ratings or perhaps just relevance, but someone is purposely driving the right-leaning political base into ever more hysterical outrage. Tell Americans that liberals, atheists and Muslims are coming for their beloved holiday, and you can almost hear the cash filling Karl Rove’s bank account. Fox News generates money and relevance by turning over every rock in the Midwest in search of more fabricated Christmas victims to drive ratings during the holiday news cycle.

The saddest part is that some people in the dominant culture take advantage of all this passion to make people like me feel unwelcome in our own country. This one time of year, the dominant religion feels free to say, “Get with the program or you aren’t a real American.” One of my favorite Christmas memories was one year when I ate a huge steak and played Blackjack at a Reno casino. You don’t get more American than that. Christmas is at the core only marginally religious. People might attend church, but Christmas is really about family, relaxation, reflection and even presents. It’s about being out of school and off work. I’ll spare the history lesson because it’s been done, but Christmas is and always shall be a secular holiday for me.

Despite my growing irritation at the noise and foolishness, I still like the holiday. I enjoy buying gifts for my children and I even consume cheesy Christmas specials and holiday music. But with every predictable rant by people like human outrage machine Bill O’Reilly, the holiday loses just a little more magic for me.

To fight the constant push for Christmas orthodoxy, I’ve tried in recent years to do novel and interesting things for the holiday. Instead of buying a bunch of plastic crap from China, my wife and I are taking our children on a Caribbean vacation this year. We’ll bask in the sun, snorkel and experience the holiday as Christmas refugees. We’ll pass on many of the unsustainable highs and inevitable letdowns the holiday can bring. For me, Christmas is about the people you love -- and it always will be.