From social media failures to snappy comebacks, these were the tweets heard 'round the world 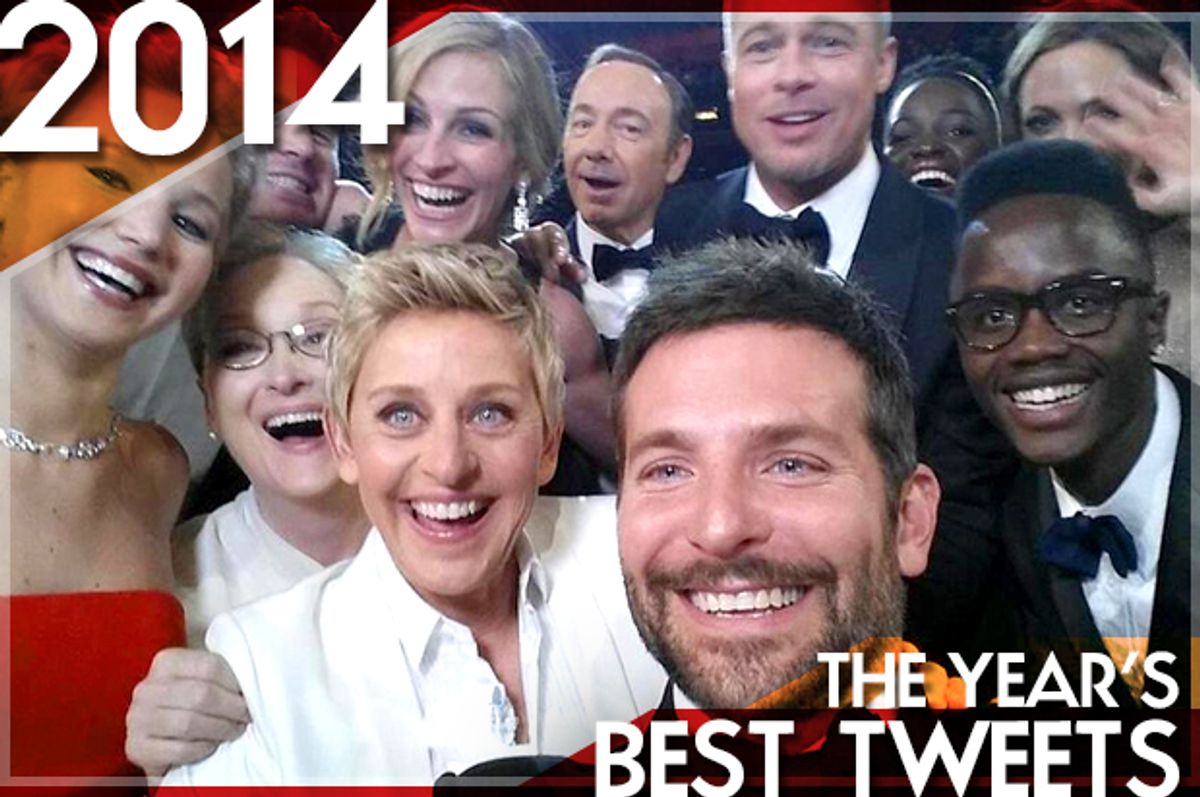 It can be the worst performance art venue in the world, and the pettiest place to go to pick a fight. And as in years past, there was plenty on Twitter in 2014 that was best quickly forgotten. But sometimes, there were moments of shared joy and sorrow. There were opportunities for awe, and even a few glimmers of hopeful change. And in the constant, often numbing deluge of social media, these were the Twitter moments we couldn't stop talking about.

You know the moment when your high school teacher tried to use slang, or your mom forwarded you a secret chocolate chip cookie recipe? That moment became a record breaker for Twitter, when, as Ellen DeGeneres put it, "We made history." During the Oscar night broadcast, host DeGeneres gathered a Hollywood A list – including Jennifer Lawrence, Angelina Jolie and Bradley Cooper -- to pose for a selfie, and demanded to the audience they make it go viral. More than three million RTs later, it continues to do so. And the real winner? DeGeneres' photo-taking Samsung, which was the whole promotional point.

If only Bradley's arm was longer. Best photo ever. #oscars pic.twitter.com/C9U5NOtGap

If you were looking for real history-making, there were ESA Rosetta Mission and its lander Philae, that blew the world's mind when the project touched down on a comet in November. The mission now continues to send fantastic pictures from far flung travels. Current location? "Interplanetary Space." Awesome.

On a balmy September evening, a gay Philadelphia couple was viciously attacked by "a group of white males and females," resulting in multiple injuries. Police asked for help in bringing the assailants to justice – and "Real Housewives" veteran posted about it on Twitter. Thanks largely to the work of a Twitter user who goes by FanSince09, users pieced together a connection from the crime to a restaurant group photo from earlier that evening. Philadelphia wound up passing a clear-cut hate crime law, and three suspects are currently being held on charges including felony assault and conspiracy.

.@ConanOBrien I'm considering going as hunky Conan O'Brien - but that might be too far fetched. — Madeleine Albright (@madeleine) October 23, 2014

It was a simple response to the inevitable "Not all men" arguments that pop up whenever women try to explain the intimidation they're subjected to, an outpouring of shared stories in the wake of the horrific mass shooting near University of California, Santa Barbara.  It drew in high-profile tweeters like Neil Gaiman and Lena Dunham, but the bravest, most pointed messages were from ordinary men and women – over a million of them.

The schoolgirls abducted from their Chibok school by Boko Haram in April are still missing. The deaths of Michael Brown and Eric Garner have gone unpunished. The world is rarely a just place, and a hashtag, even one held up by the first lady, doesn’t wield a lot of power. But with it, we could do something else. We could gather to tell our stories. And we could express our anger, and our hope.

For one magical night, Americans of all classes and beliefs came together, united to gawk at what in the literal hell was unfolding on NBC during a musical "warning story of what happens when two lesbians UHAUL too soon." And for a little while, it felt good to know that the Twitterverse cared so much more about the production than a deeply bored looking Christopher Walken did.