From Malala's peace prize to the comet landing, these were the bright spots in a bad year 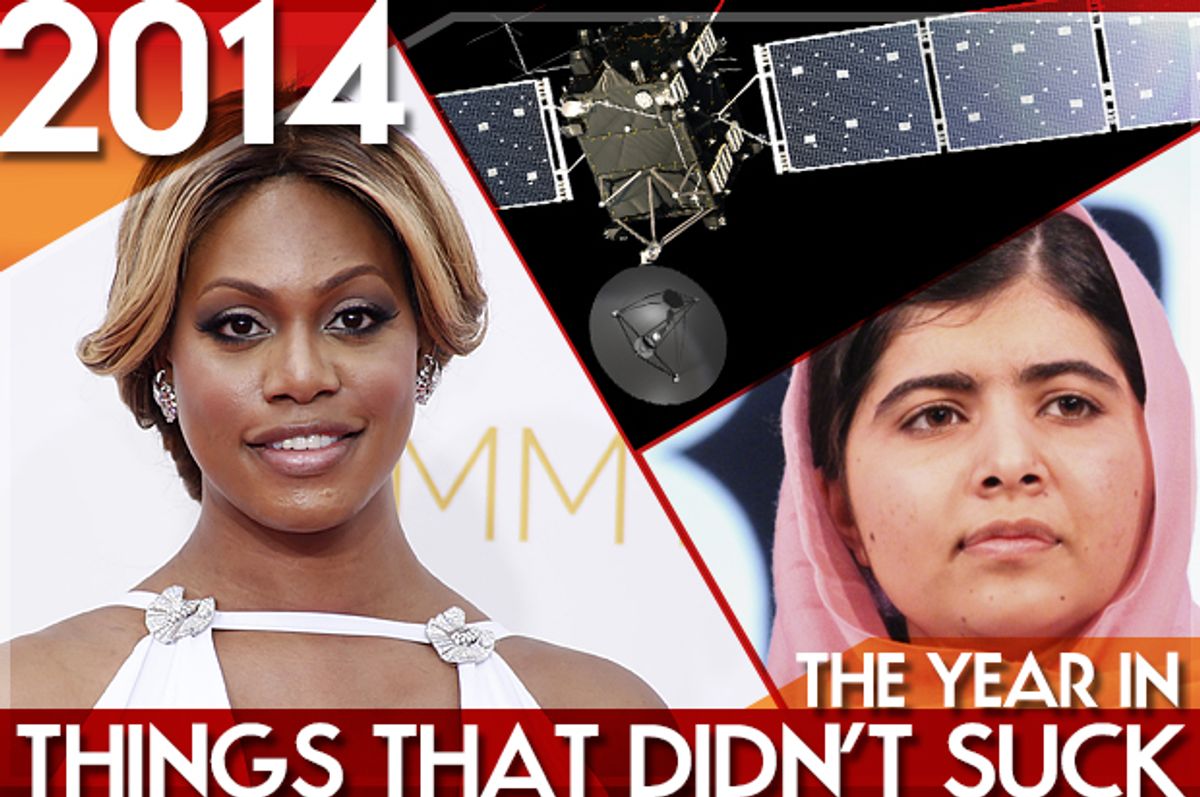 Outrageous miscarriages of justice. Violence and intimidation against women.  A nightmarish CIA torture report. Ebola.  elections. The Mother was dead all along. It's been one big 12-month downer, right? If this year made you want to go find a cave that accepts pizza deliveries and live there forever, you were not alone. And if the best thing you can say about 2014 is that it's almost over, I won't argue with you. But if, before you unscrew the top on the hip flask you've been carrying since March, you need a reminder that not everything this year was the literal worst, we've compiled a list of a few things that happened that did not in fact suck. Things that gave us hope 2015 might even be better. We're still happy to say good riddance to you, 2014, but even you weren't all bad.

Malala Yousafzai won a Nobel Peace Prize – and waited until after school to make a statement about it.

The 17-year-old youngest winner in the award's history continued her reign as one of the most outspoken education advocates in the world, two years after being shot in the head by a Taliban gunman. In her December acceptance speech, she said, "The terrorists tried to stop us. Neither their ideas nor their bullets could win. We survived. And since that day, our voices have grown louder and louder." And with those words, she gave hope to millions of girls around the world, that they too are worth fighting for.

Science landed on a frickin' comet.

Yes, the moment of scientific triumph could have been much more sartorially appropriate, but the Rosetta mission itself was a breathtaking  victory for space exploration, one that's already yielding fascinating insights into our own origins. It took 10 years for Rosetta '​s Philae to get to its destination and nail one of the greatest parking jobs in human history. And when it happened, it was breathtaking.

A trans woman appeared on the cover of Time.

A transgender-themed comedy became the most praised new show of the year. Wisconsin elected its first transgender official. Conchita Wurst, a bearded singer in a sparkly gown, became a Eurovision winner unlike any other. A revival of "Hedwig and the Angry Inch" became a Tony-winning Broadway blockbuster. And "Orange Is the New Black's" Laverne Cox schooled Katie Couric, picked up an Emmy nomination, scored the cover of Time, launched a documentary about trans youth and generally dominated. Progress has never looked more flawless.

Robin Thicke released an album and nobody cared.

Remember 2013, when the consent-averse anthem "Blurred Lines" was as inescapable as a fart in an elevator? It was a great time to be a smirking, self-congratulatory tool. And not that leering bro culture entirely disappeared this year, but there was a certain schadenfreude-flavored delight in the massive flopping of Robin Thicke's follow-up album "Paula," a cringeworthy testament to his estranged wife. In the U.K., it sold just 530 copies its first week. That's just 530 more than none. In related vindication news, evangelical gasbag Kirk Cameron's "Saving Christmas" earned the distinction of becoming IMDB's worst movie of all time.

Emma Watson made the case for feminism in a brilliant U.N. speech.

In under 14 minutes in September, the actress and icon to bookish girls everywhere nailed why feminism is an issue that both men and women need to fight for. As she helped launch the HeForShe campaign, Watson took on the notion that "'feminism' has become an unpopular word" and asked "How can we affect change in the world when only half of it is invited or feel welcome to participate in the conversation? We don’t often talk about men being imprisoned by gender stereotypes, but I can see that that they are and that when they are free, things will change for women as a natural consequence." Equality isn't a turf war. It's, as Watson so eloquently articulated, the sharing of common ground.

Here's a nice statistic for you: Over 64 percent of the American population now lives somewhere where the freedom to marry is available to same-sex couples. In the wake of United States v. Windsor, states have been removing restrictions on marriage equality in droves, and the way is being paved for rulings in more states – and a potential historic Supreme Court ruling in 2015. Here's to love.

Reefer madness started to calm down.

New York started to cool it regarding possession busts, which for years have shamefully over-targeted black and Latino residents. Medical marijuana protections expanded across the country. Oregon, Alaska and Washington, D.C., eased restrictions on recreational adult use. And a punitive, unworkable system that mostly served to swell the prison population began to crack.

In the highly charged wake of November's announcement that there would be no indictment for officer Darren Wilson in the shooting death of Michael Brown, local schools and other services were closed – but the library proudly kept its doors open and made good on its promise to do "everything in our power to serve our community." It's proof yet again that libraries are magic, and librarians are superheroes.

Staying quiet was not an option.

Years of cryptic rumors about Canadian radio host Jian Ghomeshi – and decades of disturbing talk about Bill Cosby – came to a head, with dozens of women coming forward with remarkably similar accounts. The deaths of Michael Brown and Eric Garner -- and lack of consequences for the cops -- drove thousands into the streets across the nation.  The mass shooting near the University of California, Santa Barbara, sparked an intense and illuminating public conversation about violence against women. We saw a lot of really horrible stuff this year. But for a lot of people, this year was the moment we didn't turn away.

Chris Pratt took off his shirt.

We love him at any size or shape. And if the goofy "Parks and Recreation" star hadn't been pumped up and seriously ripped for "Guardians of the Galaxy," he'd have been a winning, funny hero nevertheless. But he was. And those abs. Those gasp-inducing abs. You know, this was a rough year, and that was the six-pack that definitely took the edge off.

2014 The Year In Things That Didn't Suck