Can we separate the art from the artist?: One painting's brutal history

Warm colors depict a lazy summer. It hangs in my home -- and the artist was convicted of ugly, horrific crimes 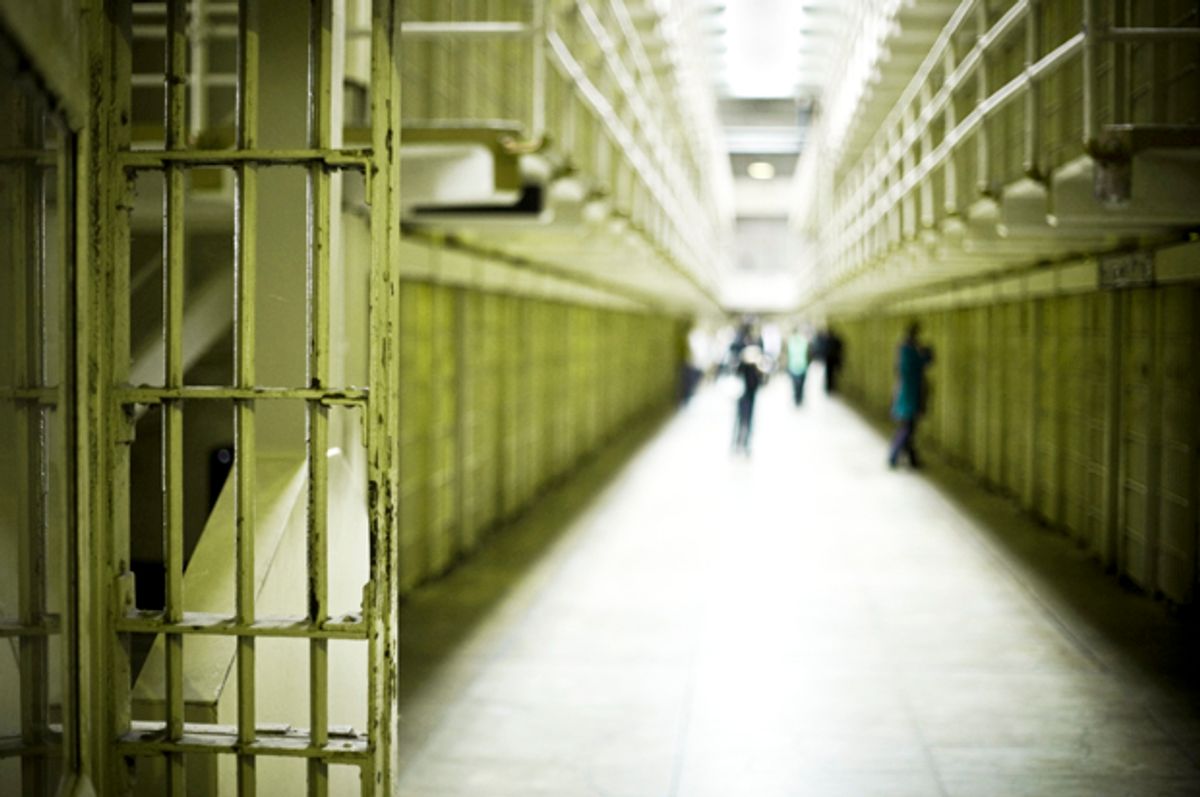 When people come over to my apartment, their eyes jump right to it: the pretty landscape of a cotton field. There's something about it, a kind of dreamy depth. Five baskets filled with cotton stand in a row near the bottom of the frame. Behind them, a long field stretches back – a crop rendered in countless dabs of white paint – toward a line of dark trees and, above that, sky in Easter-egg blue. Who painted that? The question inevitably comes. It's beautiful. But the answer to that question is the opposite of beautiful. It's brutal and ugly. Because the man who painted it – an artist, some might say – is a rapist.

I bought the painting in 2008 for less than $50. And I met the painter, the rapist, while he was incarcerated at one of the nation’s highest security prisons. He was standing behind a fence, cordoned off with the other inmates at Louisiana State Penitentiary, better known as Angola, named after the plantation once farmed on the prison’s property by Angolan slaves. I'd moved months earlier to New Orleans, ostensibly for a job as a newspaper reporter. More truthfully, though, I was a New Jersey girl in search of adventure below the Mason-Dixon Line. And a day trip to Angola's famous rodeo – where inmates ride broncos and sell crafts – sounded like just the kind of Southern Gothic jaunt I was after.

When I arrived at the prison, all around me buzzed the atmosphere of the church carnivals I’d attended growing up: the cheerful din of chatter and laughter, the rush of couples and even children clutching sweets. Spattered among the crowd, however, were stark reminders of where I truly was: the stripe-shirted inmates. A big group was busy in the rodeo ring, putting on a dusty show for the audience. Others stood at stands pedaling po-boys, with surprisingly little obstruction between them and the patrons. One group, more ominously, paced inside a cage-like structure along the rodeo periphery. That's where I met the artist. He was standing behind the fence near the craft stands, where his painting had caught my eye.

I remember his face, smooth and pale. He had placid blue eyes, with which he looked directly into mine as we spoke. His manner was friendly, even shy. When I gave my offer for his painting, he smiled and nodded. I walked away feeling pleased with myself for having struck a deal. As I made my way over to the cashier, however, the dark humor of my situation hit me. Here I was at a prison that housed the state's most violent criminals, many of them on death row, and I had just bought a piece of art to decorate my apartment. Two questions bubbled at the back of my skull, disturbing the weird calm that had possessed me all morning: Who was this man, this artist? And what had he done to end up at Angola?

Like any reporter, I decided to ask. The man I asked was the stripe-shirted one who'd been overseeing the stand where I'd spotted the painting. First I asked him why he wasn't behind the fence like the painter. He replied that he'd found the Lord, was reformed, and therefore no longer considered a threat by Angola authorities. I took him at his word. But what did the painter do that he has to be confined like that? The prisoner looked down at his shoes, back at me, and dropped the fact: That man's a multiple rapist.

I felt dizzy. I asked him to excuse me for a minute, and I walked toward a far corner to lean against a wall. I remember folding my body in half, looking at my knees as blood rushed to my head. What am I doing here? I lifted my head to survey my surroundings. Again I was stunned by the mundanity of the scene. Shopping crowds, shining sun. Yet I felt sick. Why would I buy a painting from a rapist, engage in business with him? And what would it mean to have the fruit of that transaction nailed to my wall? Would it somehow glorify what he'd done? I considered not buying it, and that thought steadied me.

But how strange that the work of such a man even appealed to me. In fact, I felt drawn to the painting's warm colors, its evocation of lazy summer. Then I began to  wonder what it would accomplish to not buy the painting. Would leaving it behind constitute some sort of protest? Hardly. What I did with the painting now would change nothing about the past. And anyway, wasn’t the art separate from the man? Hadn't I overlooked the corrupt (or allegedly corrupt) personal lives of many artists over the years in favor of appreciating their work? Roman Polanski, Woody Allen, Ezra Pound, to name a few. Why not ignore this artist as well and simply enjoy the lovely image he had created?

So I bought it and hung it on my kitchen wall. For a few weeks, I'd look at the landscape while making breakfast and get a chill, wondering if I'd made a mistake. But after a while, I got used to it. Whole weeks would pass during which I'd hardly register the painting at all. It became just a blur on the periphery, a dark spot on the pastel wall.

Six years later, the painting is one of the few possessions that has traveled with me from New Orleans to all my various lodgings in Brooklyn, Manhattan and, now, back in New Jersey. I've shed so many other objects that seemed pointless to carry across states and stages of my life. Why have I kept this? Recently a friend, after learning this story, said he thought the painting had “bad vibes” and that I should throw it away. He seemed shocked that I'd kept such a thing for so long.

Our conversation prompted me to do a little digging. Although I'd been told the painter was a rapist, I'd never actually looked into the matter myself. The word “rape” has become such an abstraction, a term one hears in the media so often that it's become divorced from the brutality of the act. For the first time, I wondered about his victims. Who were they? On the other hand, I considered the possibility that the man was falsely accused. Maybe I should have inquired into the details of the painter's alleged crimes before I'd decided to take his art home. I thought if I did that now, then perhaps I could make a better decision about what to do with the painting going forward — maybe even throw it away.

I’d kept my receipt from the rodeo and knew the painter's name, so it didn't take long to find digital copies of court records outlining his case. In the mid-1980s the man, then in his early 20s, was convicted of two counts of forcible rape and two counts of attempted aggravated rape; he'd admitted to all four crimes against the women from Louisiana and as well as to raping a fifth woman in Mississippi. One record described the “progressively increasing level of violence involved in each offense,” describing how the man stalked his victims, broke into their homes and violated them in a horrific manner I will not detail here.

What I will say is that the information has put the man's artwork in a new, startling light. Consider this: In the middle ground of the painting – between the foreground cotton baskets and background sky – the artist painted five small houses, with little wisps of smoke rising from each chimney. The perspective is of one gazing at the houses from a distance, maybe crouching down behind those baskets of cotton. Could it be that the painting portrays the point of view of a stalker in the act, one hiding and watching the houses until dark? Do his five confessed victims correspond to the five houses and five cotton-filled baskets? Is the painting meant to be a memorial of some kind, a celebration of the artist’s crimes?

Yet there’s a meditative quality to the painting, bespeaking an inner intelligence and sensitivity that is inconceivable in a rapist, a word synonymous in my mind with “monster.” Of course, as a born and bred Catholic, I should be able to reconcile this incongruence with faith in the divine that beats within the hearts of even the most terrible sinners. And while I tend toward agnosticism these days, a part of me does want to view the painting as a sign of atonement, or as evidence that the human soul – despite its ugly flaws – is inherently good.

Whatever it represents, or doesn’t, the painting is undeniably an object of beauty. And it exists despite acts of unconscionable violence, possibly even because of those acts. For it was painted in prison under a particular set of circumstances that, if altered, might have yielded a very different artwork, or no artwork at all. To wish that the rape never occurred, then, is to wish the painting unpainted. And if such an exchange were possible, if I could go back in time and trade this painting for the rape, then I certainly would.

Today when I look at the cotton field, the smoking chimneys on my wall, I can’t help feeling that I am looking through the eyes of a rapist. I worry that, in doing so, I have somehow condoned him, forgiven him. These concerns are much like those that troubled me six years ago, when I debated dizzily about whether to take the painting home. The only difference is, now, the painting's mine. I own it.