America's most ambitious infrastructure project of the century: Why today's high-speed rail launch is miraculous

Want to show the power of what government can achieve despite conservative opposition? Look at high-speed rail 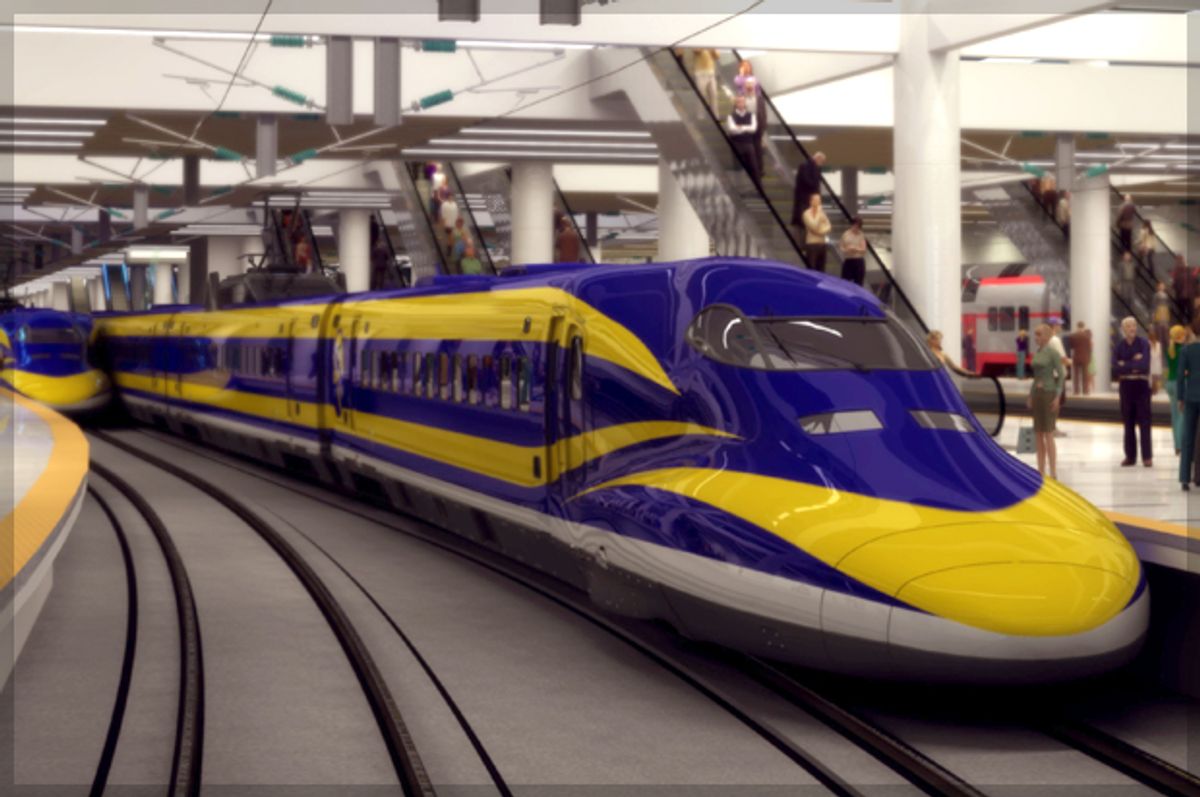 The most important kickoff in America today will not happen in Washington, where the 114th Congress begins its work. No, a far more consequential beginning takes place on the other side of the country, in modest Fresno, California, at an invitation-only ceremony on the corner of Tulare and G Streets. There, officials will break ground on America’s biggest and most ambitious infrastructure project of the century, a high-speed rail line linking San Francisco and Los Angeles that, when completed, will run at speeds of 220 miles an hour and move people between those metropolises in around two and a half hours, half the time it takes by car.

The bullet train won’t begin serving Californians until the next decade, and only if the remaining funds needed for completion can be located. But it’s kind of a miracle that shovels ever hit the ground at all. The estimated $68 billion project defeated legal challenges, conservative grousers and even a short-sighted attack by the environmental lobby to make it this far. And if it succeeds, a nation with few recent, tangible examples of what government can actually do to improve people’s lives will finally have a cutting-edge piece of infrastructure to point to.

High-speed rail in California got started in 2008, when voters approved Proposition 1A, a $9.95 billion bond measure to begin construction. Shortly thereafter, President Obama made high-speed rail a priority in the 2009 stimulus, with $8 billion earmarked for projects throughout the country. California eventually scooped up $3.5 billion of that, after conservative governors in Ohio, Wisconsin and Florida returned their funds in 2010. Officials expected to start laying steel in September 2012 on the first segment, a 29-mile stretch from Fresno to Madera. The idea was that building in the Central Valley first would be cheaper than securing land in the pricey Bay Area or Los Angeles basin.

But lawsuits and cost overruns nearly disabled the project. Not-In-My-Backyard farm owners disputed route planning, forcing more expensive alternatives. Environmental challenges piled up. The GOP House blocked new federal dollars for the project. Conservative groups then sued the California High-Speed Rail Authority, saying their business plan did not have the required funding blueprint to cover the ballooning cost, making it illegal under the statute. A judge agreed and blocked the sale of bonds.

Somehow, state officials beat back all of these challenges. The injunction on bond sales got overturned on appeal. A federal panel rejected the final environmental objections last month. Other lawsuits over the route design got settled. And Jerry Brown, California’s fourth-term governor and a supporter of the project since the 1980s (he’ll be at the groundbreaking today), landed a dedicated revenue source.

Brown proposed taking 25 percent of annual revenue from California’s cap-and-trade program (which carbon emitters pay in offsets), and funneling them to high-speed rail construction. Cap-and-trade funds must be used for carbon emission reduction, and once in place, high-speed rail should do that, by limiting millions of cross-state auto and airplane trips. Thanks to the state’s renewable energy standard, the trains will run to a substantial degree on the sun and the wind (in his inaugural address, Brown yesterday proposed increasing the renewable energy standard to 50 percent of all electricity by 2030).

In fact, without high-speed rail, California would have to use carbon-intensive solutions to accommodate the expected bump in population to 50 million by 2050. Experts estimate that the state would have to build 4,000 more miles of roads and two new international airports to solve the population puzzle, spending twice as much as high-speed rail on a less sustainable system based mainly on fossil fuels. The state’s pundits have belatedly begun to recognize this.

The cap-and-trade appropriation was a bitter fight, with friendly fire coming from environmental groups like the Sierra Club, who wanted more immediate emission reductions from the money. But Brown pushed it through, with $250 million moving to high-speed rail in the last budget.

It’s not so much the size of the appropriation, but what it signals, that could save the project. “There’s always been interest from private investors, but they wanted to see a long-term, stable commitment of state funds to help build it,” said Robert Cruickshank of the California High Speed Rail Blog. “The decision to give cap-and-trade funds to HSR is the crucial piece in giving private investors confidence that the state is committed to building this project.”

Cruickshank expects private investment deals to come together in the next couple of years. Indeed, while some investors fret about the uncertainty of specific hard dollar amounts from the state, discussions over funding have picked up in recent months because of the cap-and-trade appropriation, according to the Fresno Bee. Developers could have interest in the project because of the potential for economic growth around rail stations, where workers with jobs in Los Angeles could live 100 miles away in San Diego or Bakersfield and still have a manageable commute.

In addition to securing funding and acquiring land (only one-fifth of the parcels needed to complete the initial 29-mile stretch have been purchased), another challenge could come from the collapse in oil prices, which loosens the pressure to find alternatives. However, low gas prices could help the state keep emissions from gasoline and other fossil fuels within the cap-and-trade system. “The oil collapse has eased public acceptance,” Cruickshank said. So far, the inclusion has led to only a tiny increase in state gas prices, dwarfed by the reductions of previous months. And an expanded cap-and-trade regime will produce more revenue, ultimately benefiting high-speed rail.

Gov. Brown, who really willed high-speed rail forward in 2014, obviously sees it as a legacy project, similar to the University of California system, intra-state highway network and water infrastructure built by his father, Pat Brown, the governor from 1959 to 1967. Those investments drove the state’s prosperity for decades, and the rail line could be a more sustainable component of that growth in the future.

But building out high-speed rail has implications for more than California. Americans have effectively given up on a visionary politics, as the 2014 midterms exemplified. The country turned its back on activist government, mainly because they so rarely see anything come from it that they can touch and feel. They resist paying taxes because they can’t identify what they get in return.

Infrastructure projects can provide powerful symbols of that return on investment, and show that only effective government can create such lasting monuments to progress. Infrastructure nightmares, like the slow-motion disaster that is Seattle’s underground tunnel, breed cynicism and severely damage government’s potential. But those who would drown government and create an own-your-own society cannot explain away the Hoover Dam, or the New York City subway, or the roads linking Maine, Florida, Arizona and Idaho. Those projects worked in their time, and high-speed rail can work for the 21st century. If it succeeds, it creates not only its own economic and environmental benefits, but goodwill that can spill over into other public provisions of services.

“California, since the beginning, has undertaken big tasks and entertained big ideas,” Gov. Brown said at yesterday’s inaugural. Without a signature achievement like the bullet train, the public’s enthusiasm for such big ideas can falter. The antidote to such malaise is to actually deliver on promises, one shovel-full of dirt at a time.