The "blame the left" crew: What the right's new Hebdo attack is really about

It was predictable that the awful attacks on a satire magazine would be blamed on the "decadent left." Here's why 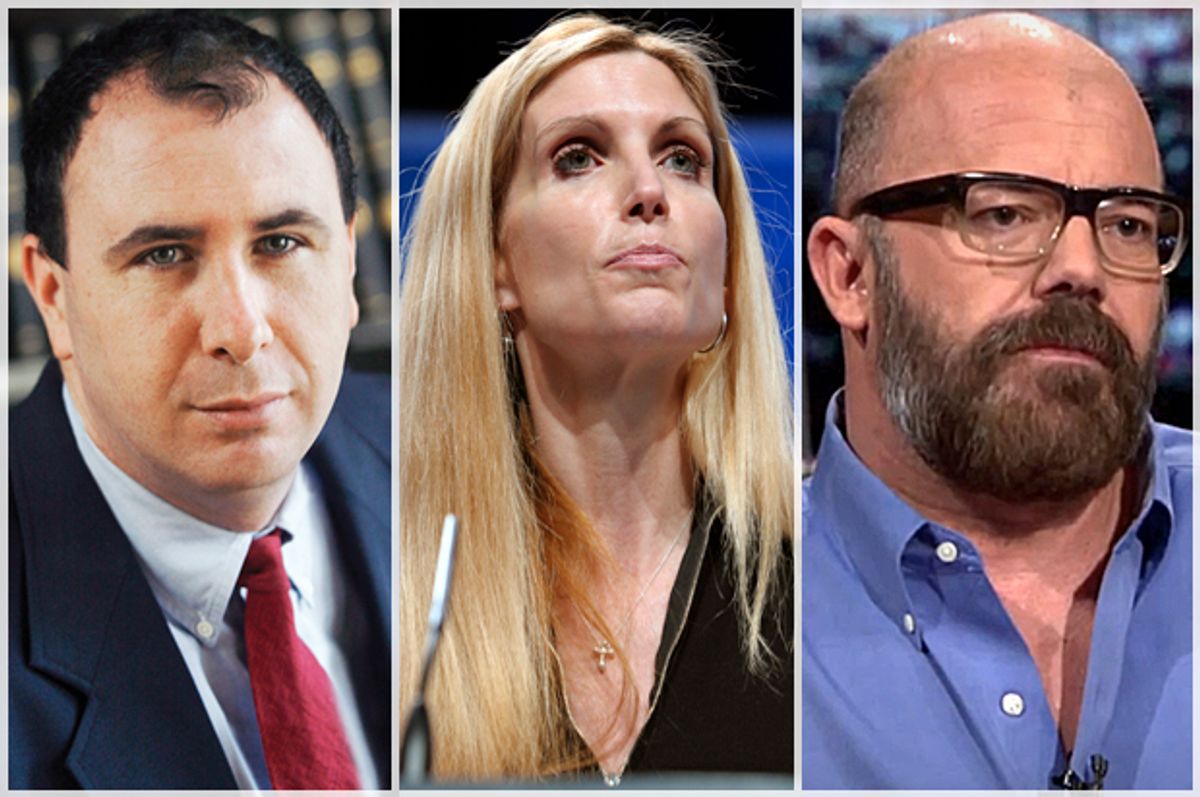 It was inevitable that liberals would end up being condemned for the horrific attacks on the French satirical magazine Charlie Hedbo in which 12 people were killed by what appear to have been Muslim extremists. Yes, I know it seems strange on the face of it that anyone would think liberals would be responsible for the actions of ultra-conservative religious fanatics, but this is nothing new. It goes all the way back to the capture of John Walker Lind, the "American Taliban," when conservative wags such as Ann Coulter declared that he naturally became a member of that violent, conservative religious sect because he was raised in Marin County, California, and was thus a liberal role model:

"We need to execute people like John Walker Lindh in order to physically intimidate liberals, by making them realize that they can be killed, too. Otherwise, they will turn out to be outright traitors."

The middle part of the country - the great red zone that voted for Bush - is clearly ready for war. The decadent left in its enclaves on the coasts is not dead -and may well mount a fifth column.

It never struck these people as odd that liberals -- the coalition that includes feminists, gays and promotes religious pluralism, including atheism -- would throw in with conservative fundamentalists, but there it is.

Sullivan later apologized for his remarks. I'm sure you'll be shocked to learn that Coulter did not.

This idea never really went away, however. It's as if some people cannot conceptualize the idea that their enemies might not be in cahoots with one another. Even gay-loving atheists and jihadis, which has to be one of the oddest alliances of all time. It took on a slightly different cast when the Danish cartoon controversy erupted back in 2006. At that time, the right was very critical of the left for allegedly failing to throw the blasphemous and insulting cartoons in the jihadists' faces and show proper regard for Western notions of free speech by telling Muslims everywhere in no uncertain terms what they could do with their prohibition on images of the Prophet Mohammed. William Kristol of the Weekly Standard put it this way:

[T]he response of Western leaders hasn't been particularly encouraging--with the notable exception of Prime Minister Anders Fogh Rasmussen of Denmark. Robert Frost said of liberals that they're incapable of taking their own side in a fight. We will see how deeply a degenerate form of liberalism has penetrated our souls. Will we anguish? Or will we fight?

He was including that liberal squish George W. Bush in his criticism, by the way. His state department had issued a statement condemning the cartoons as being "unacceptable."

Fast forward to the horrific events of this week in Paris and we'll see the same refrain. Liberals are once again at least partially responsible for the terrible acts of what appear to be ultra-conservative fanatics because they have failed to properly defend free speech.

Yesterday, Jonathan Chait in New York magazine quoted the Time magazine Paris bureau chief Bruce Crumley in the wake of the earlier firebombing of Charlie Hebdo in 2010, angrily condemning what he called "'majority sections' of Western nations to bait Muslim members with petulant, futile demonstrations that 'they' aren’t going to tell ‘us’ what can and can’t be done in free societies?” He was obviously talking about the attitudes and practices of Islamophobes throughout Europe, but did take the magazine to task for its overall offensiveness as well.

Chait sarcastically says, "Crumley carefully noted, terrorism is bad, too. But his primary villain was the satirical magazine that provoked the attacks." Oddly, later in the piece he quotes Crumley saying that societies cannot give in to the hysterical demands of extremists and that violence and intimidation cannot be condoned, but his point seems to be that beyond that any discussion or disagreement with the substance of the free speech in question is off limits.

The latest attack, which (unlike the previous one) succeeded in killing large numbers of people, casts the question in a different light. In the wake of actual (and not merely potential) bloodshed, few of us are willing to blame the staff of Charlie Hebdo for provoking their own murders. The trouble is that Crumley’s 2011 outburst is not just embarrassing today, it also lies uncomfortably close to the mainstream Western liberal view.

He's not speaking of liberalism in the parochial American sense, obviously, but the criticism hits the same people. He goes on to quote Jay Carney, Obama's former press secretary, who very mildly pointed out at the time that insulting depictions of the Prophet Mohammed are entirely legal but that publishing them showed questionable judgment and concludes:

The right to blaspheme religion is one of the most elemental exercises of political liberalism. One cannot defend the right without defending the practice.

So much for that old American trope about freedom of speech: "I may not agree with what you say, but I will defend to the death your right to say it." By defending the "practice," he apparently means we are also obligated to refrain from objecting to what people say as well, which is a very different proposition. This essentially says that in defending freedom of speech you must give up your own right to free speech lest you help the terrorists -- which is a bit strange.

And it's a concept over which the great right-wing defenders of American values are going to find themselves in conflict. After all, the shoe was on their religious feet not that long ago:

NEW YORK, Sept. 23—He's particularly outraged, Mayor Rudolph Giuliani has said, by a collage of the Virgin Mary dotted with elephant dung. He isn't impressed by the pickled pig carcasses, either. And he's taken dead aim at the Brooklyn Museum of Art: It will lose $7 million in city funds, he warns, unless it cancels a "sick" exhibit of British works scheduled to open next week.

Rome's Catholic, Muslim and Jewish leaders have united to condemn pop star Madonna's decision to stage a mock-crucifixion when she performs in the Italian capital on Sunday a stone's throw away from Vatican City.

The lapsed-Catholic diva's latest irreverent performance sees her wearing a fake crown of thorns and descending on a suspended, glittery cross as part of her worldwide "Confessions Tour".

Having already been criticised in the United States, Catholics priests from across the Eternal City have gone one further saying the act is blasphemy.

Cardinal Ersilio Tonino, speaking with the approval of Pope Benedict XVI said: "This time the limits have really been pushed too far.

"This concert is a blashphemous challenge to the faith and a profanation of the cross. She should be excommunicated."

In an unusual show of religious solidarity, Muslim and Jewish leaders added their condemnation of the self-styled Queen of Pop, famous for peppering her concerts and videos with controversial religious and sexual imagery.

"I think her idea is in the worst taste and she'd do better to go home," Mario Scialoja, head of Italy's Muslim League said.

People get upset about things people say and often condemn them for saying it because it's offensive to them or others. It's certainly not an exclusively liberal thing unless you think that fundamentalist Islam is liberal or that conservative Catholics like Rudy Giuliani and Pope Benedict are left-wingers. (But it must be noted that in all the situations outlined here, the only person to use the power of the state to try to shut anyone up was Rudy Giuliani.)

Arthur Goldhammer wrote a very insightful piece about this latest horror in Al Jazeera. He pointed out that Charlie Hedbo was more than just a satirical magazine. It followed a certain unique French tradition that was "an equal opportunity offender, and it reveled in its freedom to vex, irritate and derange." It's doubtful many people would feel it necessary to defend the substance of everything in its pages --- how could they without having their heads explode? No, what we must defend is the principle under which they were allowed to say what they said, period. That is inviolable. And that principle also allows people to condemn Islam or Charlie Hedbo  --- or both in the very same breath. Once you start policing what people say in the name of free speech you've already lost the argument.

And yes, under that principle, we must also defend William Donohue's right to say the cretinous, idiotic things he says. And we can certainly also feel free to condemn him for saying it. In doing so, we are not advocating that he be silenced. We are using our right of free speech to say we think he's a cretinous idiot and we wish he would stop being one.