10 cities where an appalling number of Americans are starving

If Republicans have their way with anti-hunger programs, it'll get a lot worse before it gets better 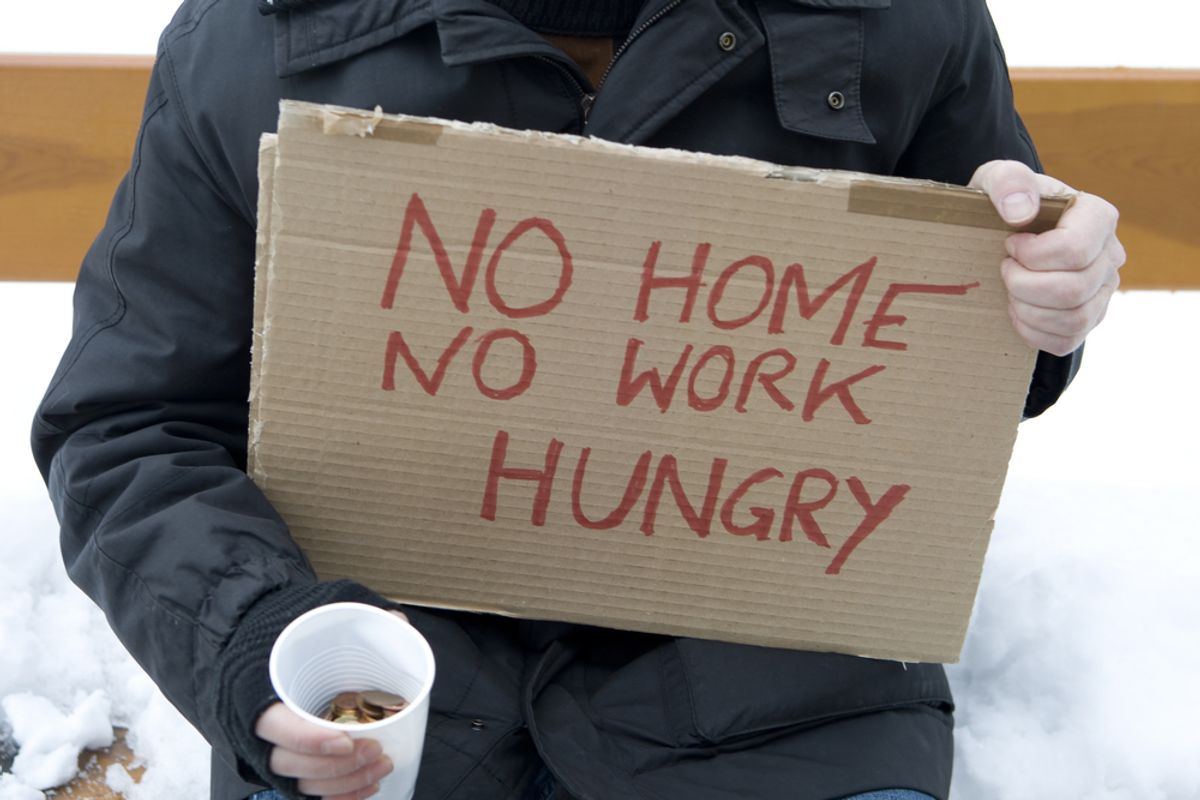 Hunger is a concept that is often connected with poor developing countries, but it has also become increasingly common in the United States. According to the U.S. Department of Agriculture, 49.1 million households experienced food insecurity at some point in 2013. On December 11, the U.S. Conference of Mayors released its 32nd Annual Report on Hunger and Homelessness. The report covered 25 American cities: 71% said the number of requests for emergency food assistance had increased in the last year, while only 25% said that requests for emergency food assistance had decreased. And 84% of the cities surveyed expected emergency food requests to increase in 2015, but many food banks may not have the resources to meet those requests.

Helene Schneider, mayor of Santa Barbara and co-chair of the Task Force on Hunger and Homelessness, warned in the report that Congress will increase hunger in U.S. cities if Republicans defund federal anti-hunger programs; the report found that in eight of the 25 cities, at least 20% of the emergency food being distributed came from federal funding (in Los Angeles, it was 51%). Here are 10 U.S. cities where an appalling number of Americans are going hungry.

In 2010, a study by the Food Research Action Center declared Memphis to be the hunger capital of the U.S. and found that 26% of its residents had suffered from food insecurity at some point during the previous 12 months. Four years later, Memphis had the worst hunger problem of the 25 cities examined in the U.S. Conference of Mayors’ new report: 46% of the requests for emergency food assistance in Tennessee’s largest city—almost half—were being unmet. Food pantries in Memphis are overwhelmed with requests, and according to the report, they are having a hard time “securing funds to purchase the food needed to meet the need.” Unemployment, low wages and poverty were cited as the main causes of hunger in Memphis, where the official unemployment rate is 7.5% and 26.2% of its residents are living below the poverty line. The Conference of Mayors noted that in 2015, “city officials expect requests for food assistance to increase moderately and resources to provide food assistance to decrease moderately.”

In the Conference of Mayors’ report, there is both good news and bad news where San Antonio is concerned. The good news is that requests for emergency food assistance in San Antonio have “decreased over the past year by 18%.” But the bad news is that 38% of the requests for emergency food assistance are still going unmet in that Texas city, where the Conference said that the number of homeless families “increased by 19 percent” over the past year. For 2015, city officials expect a “moderate” increase in food requests combined with a “moderate” decrease in the resources to meet them—and almost half of the San Antonio residents facing food insecurity next year are likely to be the working poor. The Conference found that 46% of the people requesting emergency food assistance there were employed.

San Francisco has long been one of the most expensive cities in the U.S. Extreme gentrification in the Northern California city has gone from bad to worse in recent years, making it even more difficult to stay afloat without at least an upper-middle-class income. The U.S. Conference of Mayors reported that of the 25 cities analyzed, San Francisco is among the worst for hunger: 37% of the requests for emergency food assistance in San Francisco went unmet in the last year (compared to 15% in Denver or 10% in Charlotte, NC). Food pantries in the Bay Area are working hard to meet the heavy demand for food assistance: the Mayors Conference reported that the San Francisco/Marin Food Bank Pantry Program feeds, on average, 30,000 households every week and distributed an impressive 30 million pounds of food through its pantry network in 2013. It also fights hunger in San Francisco with an aggressive food stamp outreach that includes special “SNAP in a day” events in which the poor can receive EBT cards the same day they apply for them. But in a city with such a high cost of living, the San Francisco/Marin Food Bank Pantry Program needs a lot more funding. The Conference of Mayors predicts that in 2015, the need for emergency food assistance in San Francisco “will increase substantially” while funding for the city’s anti-hunger programs “will decrease substantially.”

The U.S. capitol is a city with glaring income inequality, with 18.5% of Washington, DC’s population living below the poverty line. Officials in DC, according to Conference of Mayors, estimate that requests for emergency food assistance “increased by 56 percent over the past year”—and 30% of those requests (almost one-third) went unmet. The three top reasons cited for hunger in Washington, DC were poverty, high housing costs and high healthcare costs. The problem is likely to worsen in 2015: DC city officials, “expect requests for food assistance to increase moderately and resources to provide food assistance to decrease moderately.” The report also pointed out the link between poverty and a poor diet, noting that “the Washington metro area is seeing growing numbers of low-income individuals suffering from diet-related illnesses such as diabetes and hypertension.”

At 4.0%, Des Moines’ official unemployment rate is below the national average. But unemployment figures never tell the whole story because they don’t factor in long-term discouraged workers or things like wages and cost of living—and with 17.7% of Des Moines residents living below the poverty line, the working poor are plentiful in Iowa’s largest city. The Conference of Mayors found that requests for emergency food assistance “increased by 20 percent over the past year,” and three reasons cited were low wages, high housing costs and poverty. The Conference also found that 30% of Des Moines’ emergency food requests were going unmet and predicted that in 2015, such requests will “increase substantially” while resources for food assistance will “decrease moderately.”

Boston is among the most expensive of the Northeastern Corridor cities, and the combination of poverty and a high cost of living can easily lead to hunger when food assistance is inadequate. For Boston, the Mayors Conference reported that requests for emergency food assistance “decreased by 1.7 percent” in the past year but that among those still requesting food assistance, 36% of the requests went unmet. And the report cited the high cost of health care, housing and utilities as three major causes of hunger in that city. Roughly 21.2% of Boston residents live below the poverty line, and clearly, many of them have become food-insecure as a result of having too many expenses and not enough income. To make matters worse, the Greater Boston Food Bank has reported that even Bostonians who make too much to qualify for food stamps might be struggling to eat because they spend so much of their income on housing and utilities.

Sun Belt cities tend to attract the homeless and the working poor because of their milder climates: being homeless is brutal under any circumstances, but it is especially harsh in places where sub-freezing temperatures, snow and ice are the norm during the winter months. One of the Sun Belt cities with an abundance of hunger and homelessness is Santa Barbara, California, where requests for emergency food assistance “increased by 8%” this past year and 30% of those requests went unmet. The three main reasons cited for hunger in Santa Barbara were unemployment, low wages and high housing costs, although the Mayors Conference report said that most of the Santa Barbara residents seeking emergency food assistance were the working poor rather than the unemployed: roughly 70% of them had jobs.

Salt Lake City is a perfect example of a place where one finds lower-than-average unemployment but widespread poverty: Utah’s largest city has an official unemployment rate of 3.3%—definitely below the national average—but the fact that 19.4% of its residents are living below the poverty line points to an abundance of low-paying jobs. Among the people requesting emergency food assistance in Salt Lake City in the past year, the Mayors Conference reported that 74 percent were employed. The Conference found that such requests “increased by 16 percent over the past year” and that around one-fifth of that need was going unmet. Three reasons cited for food insecurity in Salt Lake City were low wages, high housing costs and poverty.

Although Philadelphia is doing relatively well in some respects (from nightlife and the arts to jobs in healthcare and higher education), the East Coast’s second largest city still has a great deal of poverty and economic deprivation. Gentrification in historically low-income sections of the city does nothing to help the poor out of poverty; it simply chases them out of those neighborhoods and contributes to homelessness. The Conference of Mayors’ report found that among the homeless, 49% of requests for shelter in Philly were going unmet—and among the city’s hungry, 20% of requests for food assistance were going unmet. In other words, one in five hungry Philadelphians isn’t receiving food assistance when it is needed. The Conference also found that in Philly, many of the people seeking emergency food assistance were the working poor: 60 percent of them were employed. Nonetheless, unemployment was cited as one of the leading causes of hunger in Philly along with “low wages” and “poverty.” Philabundance, one of the organizations fighting hunger in that city, has said its anti-hunger efforts become more difficult every time members of Congress vote to decrease food stamp benefits.

The Conference of Mayors reported that in Norfolk, there has been a 3% increase in “the number of homeless individuals” and a 3% increase in the number of people requesting emergency food assistance—and Norfolk officials estimated that about 30% of those requests are being unmet. Food pantries in Norfolk clearly don’t have the resources to help everyone in that city suffering from food insecurity. Norfolk officials expect the number of residents seeking food assistance to “increase moderately” in 2015, and many of them will no doubt be the working poor. The Conference of Mayors estimated that 51% of people seeking food assistance in Norfolk are employed and cited “low wages” (along with “inadequate benefits” and high healthcare costs) as one of the main causes of hunger in that city.