The problem with "Je Suis Charlie": That kind of solidarity comes with baggage 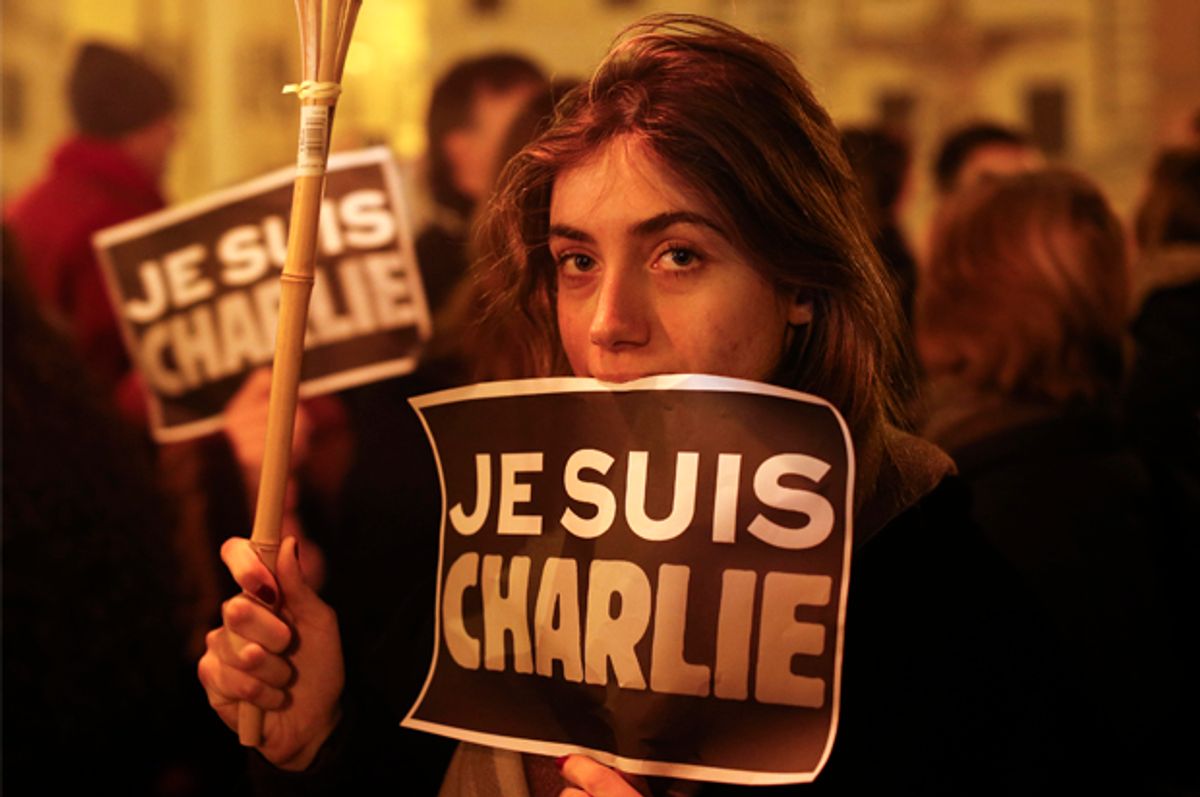 The horrific summary execution of a dozen members of the editorial staff of the French satiric magazine Charlie Hebdo has drawn nearly global outrage and grief. Commentators have been quick to file op-eds, and I am no different. However, rather than trying to speak on the issues of race, religion, fundamentalism, terrorism, free speech, race, religion, or French society and politics, I want to focus on the tidal wave of demonstrations and social media campaigns that unabashedly and passionately declare an apparently seamless bond of identification: “Je Suis Charlie.”

The aerial photos over Paris, showing the multitudes of grieving, angry people, are for me both impressive and frightening. Emotion is always more powerful than reason. Now certainly if you asked any one of the demonstrators at these events their reasons for being there and declaring their identification Charlie Hebdo were, you would get a barrage of ready responses very quickly. But they would likely be telegraphic, formulaic. They would both benefit and suffer from the power of immediacy.

Now such pronouncements of identification have always been around—the most memorable of the post-war era was probably John F. Kennedy’s “Ich bin ein Berliner” (“I am a Berliner”) speech in 1963, at the steps of the steps of Rathaus Schöneberg. They are a standard part of our rhetorical repertoire. I neither endorse nor condemn "Je Suis Charlie," but I urge us to pause and consider just how many ways these acts of identification can function. Here are three--they are by no means mutually exclusive or clearly demarcated. None of them are necessarily good or bad. They are: empathy, solidarity, and identification.

Empathy comes up when we can imagine the suffering, fear, and pain of others. As the 18th century political and economic theorist Adam Smith notes in his "Theory of Moral Sentiments," one of the fundamentals of social life is the ability to imagine ourselves in a similar situation as others—that is how people are bound together. This is a rich and good capacity in human beings. But as much as I appreciate it, I also question whom we extend our empathy to. This specifies, and narrows, our celebration of empathy. We can certainly not attend to all the world’s worthy subjects of empathy—but we are morally responsible for accounting for whom we empathize with, and those whose pain, death, and suffering, we ignore, even if their suffering is just as bad, or even worse, than that of the ones we care for. Why don’t people (especially in the “developed” countries), fill our streets and plazas when we learn of the deaths of those killed—just as brutally and emphatically--in Africa, Asia, Latin America? By either automatic rifle fire or what Rob Nixon calls the “slow violence” of economic, political, environmental, cultural strangulation? What circumscribes our outrage, and our willingness to act? If it turns out we empathize with people who are mostly like us, then that is a pretty limited form of empathy—resembling more self-love. Empathy in this case solidifies longstanding biases, and this is what I fear might well be happening to some degree in the case of the "Je Suis Charlie" demonstrations.

Solidarity means signing on to whatever cause seems to be presented by those who have suffered. This is a more engaged form of protest, because it does not stop at mere pity or empathy--it promises future action. But what actions are sanctioned and legitimized by one’s identification? There are already iconic signs attesting to “Solidarity with Charlie Hebdo,” but what, exactly, are we now agreeing to do, in solidarity? The simplest and most compelling “cause” Charlie Hebdo now stands for in the eyes of most is a free press and free speech. But are we not forgetting what this publication “satirized,” and how? As an article in the Washington Post points out, the most recent issue of Charlie Hebdo contained a lead article on the novel Submission by Michel Houellebecq. In it,

"a Muslim wins a presidential election against a far-right candidate and presides over the Islamization of French society. Persian Gulf monarchies pump in funds into new Islamic schools; teachers at the Sorbonne are compelled to convert to Islam; women slowly disappear from the workplace; polygamy becomes legally permissible. The book can be read as a familiar fever dream of the West's Islamophobic far right."

Charlie Hebdo had previously been the center of controversy, death threats, and fire-bombing in 2011 over its special issue entitled “Charia Hebdo” which featured a cartoon depicting the Islamic Prophet Mohammed as its editor-in-chief. Now those in the west might shrug this off as edgy satire, but to not imagine that those whose religion was being parodied came from a different cultural background as those who produced the image, and to assert that those who might be offended should nonetheless read the satire as if they were not from an Islamic background, bespeaks arrogance. If we are absolute in defending the depiction of anything, in anyway, we had better be prepared to be on the streets for any horrific, offensive, immoral, pornographic image that might be presented to us. Or else, as I said before, be held accountable for the particularity of our solidarity.

As Richard Seymour writes in a fine article on the subject in Jacobin: “There is already an enormous pressure, in this context, to defend Charlie Hebdo as a forceful exponent of 'Western values,' or in some cases even as a brilliantly radical bastion of left-wing anti-clericalism. Now, I think there’s a critical difference between solidarity with the journalists who were attacked, refusing to concede anything to the idea that journalists are somehow ‘legitimate targets, and solidarity with what is frankly a racist publication.” I will leave it up to the reader to decide whether or not they believe Charlie Hebdo is a racist publication—what I want to stress is that when one identifies as Charlie Hebdo one needs to take into consideration what most drives one’s identification.

Finally, and most problematic for me, is the notion of identification. Take another recent example of identity-based solidarity: “#ICan’tBreathe” is a powerful symbol that is, like all symbols, a bit false. Some of us can and will always be able to breathe just fine. Again, the idea is not to give up on solidarity, rather it is to respect and defer to the real differences that injustice produces, understanding who the real and likely victims are, and acting with that knowledge and humility. And here is where "#ICan'tBreathe" and "Je Suis Charlie" are distinct, for they tap into two different kinds of grievances.

“#ICan’tBreathe” gathered enormous support because we in the United States have seen the murder of black and brown men (and women and children) take place over and over again throughout our history, and seen their killers escape justice in nearly all these cases. The killing of Eric Garner, captured on video—the relentless, illegal, and unnecessary strangulation of a human being, followed by the exoneration of his killer, tapped into a long history of such violence. We had had enough. Those marching are victims or likely victims of such violence, and others who understand the structural racism that undergirds these acts and the near impunity with which such killers perform such acts. What is required nonetheless, if such anti-racist movements are to be successful, is a calibrated understanding of the actual historical realities of racism in the United States.

The case of “Je Suis Charlie” is somewhat different, but it demands the same self-reflection and inspection of the historical record. The situation of Arabs and those of the Islamic faith in France has been a longstanding one of oppression and racism, dating back to France’s colonial projects. Like all colonizers, French racists have legitimized their oppression of and hatred for Arabs and others by denigrating their culture and beliefs, and holding the values of the western liberalism tradition as the only ones worth maintaining. What we in the U.S. call “multiculturalism” simply does not exist in France. There the keyword is “integration,” which means, again, the “submission” of others to the French model—hence the satiric irony of the title of the Houellebecq novel. And since the terrorist attacks of 9/11, what Samuel Huntington called the “Clash of Civilizations” rhetoric has been exploited to further legitimize the notion that some peoples just cannot be “integrated.” What many see in the terrible killings of the staff of Charlie Hebdo is in fact a confirmation of that belief—“these people” are not really people at all, despite their perfect, accentless French, they have no respect for free speech, they are irremediable terrorists at heart. I think we need to watch out for that, while not giving up our grieving and outrage at the killings.

So what does it really mean to say ”I Am Charlie Hebdo”? It can run the gamut from “I am a defender of free speech” (see above) to “I think Islam is ridiculous and dangerous” to “I am a rabid French chauvinist.” Let me be clear—I am not saying that Charlie Hebdo was representing any of those notions necessarily, at least not in the way any of us might interpret those characterizations; I am saying that people who are all these things and more can rally along together, all leaning on each other without knowing what new strange bedfellows they (or we) have joined. Not unlike the proliferation of yellow ribbons that popped up after 9/11, when it soon became clear that that sign of empathy, solidarity, identification meant everything from pity for the victims of the attack to a willingness to visit nuclear weapons upon whomever we felt was responsible, to a carte blanche for the United States to do anything it pleased on the world stage. Frankly, when I saw the photographs of demonstrators in France, taken from on high, the people’s faces invisible, my worst fear was that so much of that energy would be translated into adding fuel to a longstanding anti-Islam hatred, for lack of any better channel for all that anger, fear, shock and awe.

What will happen when things cool down? This terrible event takes place in a situation already inflamed with racial and religious, even “civilizational” tensions, not to mention political ones. Where will all this empathy, solidarity, identification flow? It is impossible to predict because these events take place within a complex set of pre-existing conditions. One would hope that these demonstrations in France will not fuel precisely the kinds of extreme and intolerant and instrumentalized hatred and violence that we found in the murderers. The best way to identify with Charlie Hebdo would be to not give into that mode of identification, and not to see others as caricatures, stereotypes, cardboard figures. If we end up taking on that aspect of Charlie Hebdo, in whatever small or big way, we would have made a very bad choice of identity.