There was progress Sunday night, but we've got a long way to go 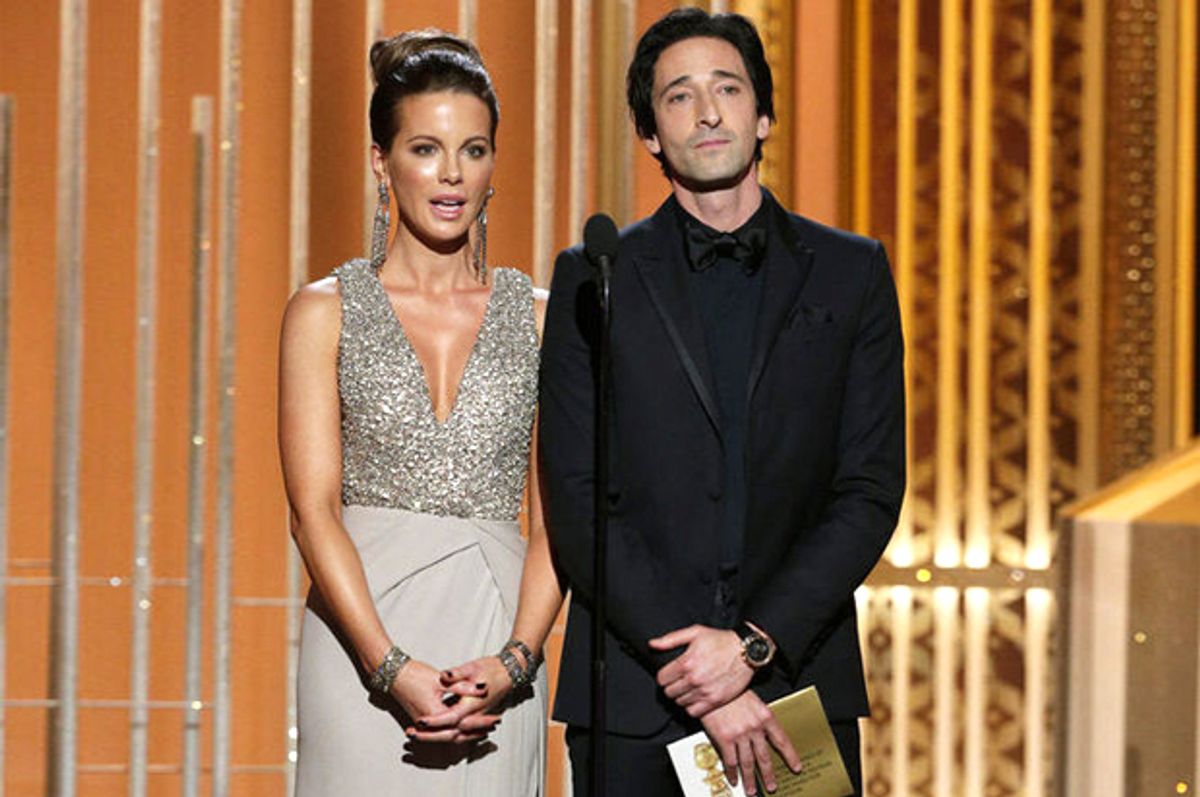 On Sunday night, the Golden Globe awards offered audiences a few welcome hours worth of heart-swelling, tearjerking moments of laughter and hope and encouragement that the world might be slowly becoming a less crappy place if you're LGBT or female or not white. But roll up your sleeves, Hollywood, and take a break from congratulating yourself, because we still have a hell of a lot of work to do here -- particularly in regard to that whole curing sexism thing.

That the show was hosted, again, by two strong, funny, avowedly feminist entertainers and that it scored impressive wins – and moving speeches – for a diverse breadth of movies and television programs shows encouraging and beautiful progress. Yes, it was awesome how Amy Adams, Maggie Gyllenhaal and Patricia Arquette gave incredible speeches acknowledging their admiration for the work of their peers and the achievements of women. Yes, it was a great zinger when Lily Tomlin cracked that "Finally, we can put at rest that negative stereotype that men just aren’t funny." And when Amy Poehler and Tina Fey did their dueling impressions of Bill Cosby, gruffly intoning, "I put the pills in the people. The people did not want the pills in them" – wow. I'm just saying, let's not get carried away here. Let's not quite rush to declare, as the Guardian did, that this was "the first feminist film awards ceremony" or celebrate, as MTV did, how "Feminism Ruled the Golden Globes," or go making lists, as the Washington Post did, of "The top feminist moments at the 2015 Golden Globes." Take it down a notch.

See, the thing about show business is that it loves to applaud itself. It loves to go, "Look at us! We're so neat and good!" But I didn't feel entirely empowered Sunday night, looking at the a few well-known actresses who appear to have succumbed to the Hollywood tyranny of extreme cosmetic procedures. Likewise, I know J. Lo dresses to invite commentary, but it still felt pretty retro when Jeremy Renner couldn't pass up commenting on his co-presenter's assets, replying, when she offered to open the envelope because "I have the nails" that "You've got the globes too." Hubba hubba! And I couldn't ignore that there in the crowd was this year's Golden Globe nominee Helen Mirren, a woman who has described date rape as "one of the many subtle parts of the men/women relationship that has to be negotiated and worked out between them" and asserted that "I prefer male journalists because there's a streak of female journalism -- the bitches -- who are mean-spirited and nasty because you are another woman and want to make you feel crap." There was Ricky Gervais, who did a scathing bit on the show about how "I'm not going to start picking on things you've done. Some of it immoral. A lot of it illegal. But if we've learned one thing, it's that famous people are above the law" -- sort of interesting coming from a man who just last September, in the wake of Hollywood's nude photo hacking scandal, seemed pretty cool with the idea of his show biz pals being the victims of illegal acts.

People have a right to personal beliefs, and to make jokes others don't find funny. Show business awards are not handed out or withheld based on private behavior. The Golden Globes had no imperative this year to be the "most feminist ever." I just found myself questioning that particular description when Adrien Brody took the stage. I remembered, over a decade ago, when he won an Oscar for Roman Polanski's "The Pianist." I remembered the standing ovation Polanski, who in 1977 pleaded guilty to drugging and sexually assaulting a 13 year-old girl, received from Brody and Martin Scorsese and Meryl Streep when his name was announced as Best Director that night. I remembered Brody calling Polanski "fantastic, such a wonderful, unique person." You want to applaud Tina and Amy for their burns on Cosby? Okay. But remember when many of their same audience members were standing up and cheering for Roman Polanski.

Progress takes time, and I am heartened to see things moving, albeit slowly, in a more positive direction for women in entertainment. But the real mark of change will come when there are female winners in non-gendered categories like directing and screenwriting and scoring. It'll come when there are fewer jokes about sexism because there's less sexism to joke about, the other 364 days a year. It'll come when nobody calls it a "feminist" Golden Globes.