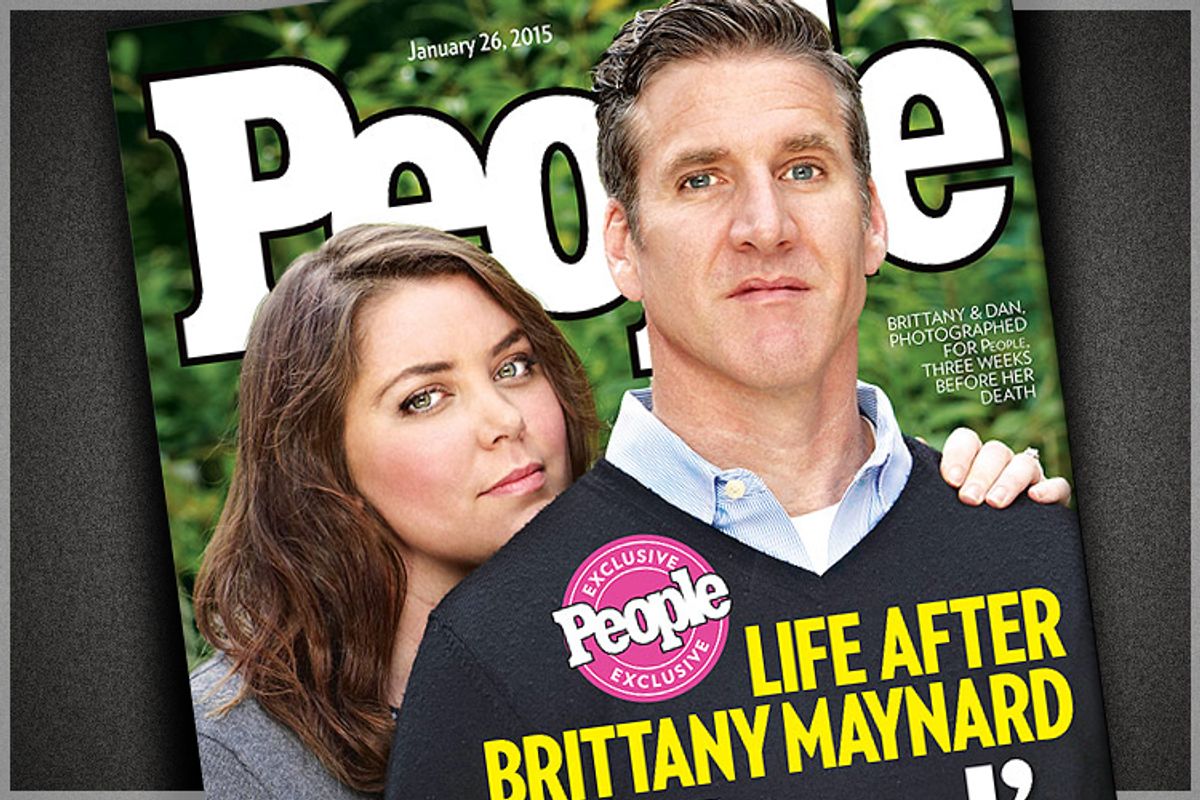 Dan Diaz is a 43 year-old recent widower who sees his mission now as carrying on the message of his late wife. It's a message a lot of people find hard to hear. A little over a year ago, his wife, Brittany Maynard, was diagnosed with a rare form of brain cancer. And in the final few weeks of her life, she became one of the most passionate and outspoken advocates for the right to die the movement has ever had. Now, in new interviews this week with People and NBC News, Diaz recounts Maynard's last day and admits, "The thing is... you don't want to let go of your loved one."

The 29 year-old Maynard gained worldwide attention in October when she went public with her odyssey – including her devastating diagnosis and her family's choice to move from California to Oregon so she could exercise the state's Death with Dignity laws. She partnered with Compassion & Choices to launch The Brittany Fund, to work toward achieving her goal "that every terminally ill American has access to the choice to die on their own terms with dignity." She eloquently spoke out about how having autonomy and agency over her own end-of-life decisions had "given me a sense of peace during a tumultuous time that otherwise would be dominated by fear, uncertainty and pain." And she explained, repeatedly, that she didn't want to die, but that she understood her "bone splitting headaches and seizures" were a portent of an inevitable and painful fate. Finally, on November 1, she died at home, "as she intended — peacefully in her bedroom, in the arms of her loved ones."

Speaking now with People, Maynard's husband Diaz says that "I have good days and bad days. But the feeling of loss is always there – particularly in the morning when I first wake up. And at night, when the house is quiet and I'm just there with the dogs. I think about her every day." And in his conversation on "The Meredith Viera Show," he says that on her last morning, they went for a walk with family, a friend and a dog. Then, "We got back to the house and she just knew that it was her time" -- because that morning Maynard had also had another seizure. Diaz says the seizure was "a reminder of what she was risking because what was coming next was losing her eyesight, becoming paralyzed and an inability to speak. And then she would essentially be trapped in her own body." Instead, he says, "It truly was the most peaceful experience that you could ever hope for when you talk about a person's passing."

When we live in a country in which death by disease is almost always described as "losing a battle," we clearly have created the expectation that the only way to go is swinging, raging with every last breath, no matter how agonizing it may be. To choose to head death off, to opt for any less time – even if the time to come promises to be horrible – is somehow hard to fathom. Both People and "Today" have referred to Maynard's death as "controversial" – a silly sentiment that's still considerably kinder than a great deal of the recent trolling that's been aimed at her family. It shouldn't be controversial to alleviate pain, or to take a realistic view of the quality of one's life. Maynard – and now Diaz's – challenge to the rest of us is to recognize that death can't be prayed or wished away, and that it almost always comes sooner than any of us would like. It takes compassion and profound unselfishness to value the alleviation of a loved one's pain over the consolation of having that person still present and breathing. It takes heart to, against all instinct and desire, let go. That's what this issue is about, and that's why it's so important. Not just for the other Brittanys out there who deserve to meet death on their own terms, but all the Dans, all the loved ones who like him, understand that "To suggest that she should suffer for me, for anyone? No."