"Gangs of Wasseypur": India's explosive crime epic may be the next "Oldboy"

A blood-soaked, operatic blend of Tarantino and Bollywood, this crime saga takes Indian cinema to a new level 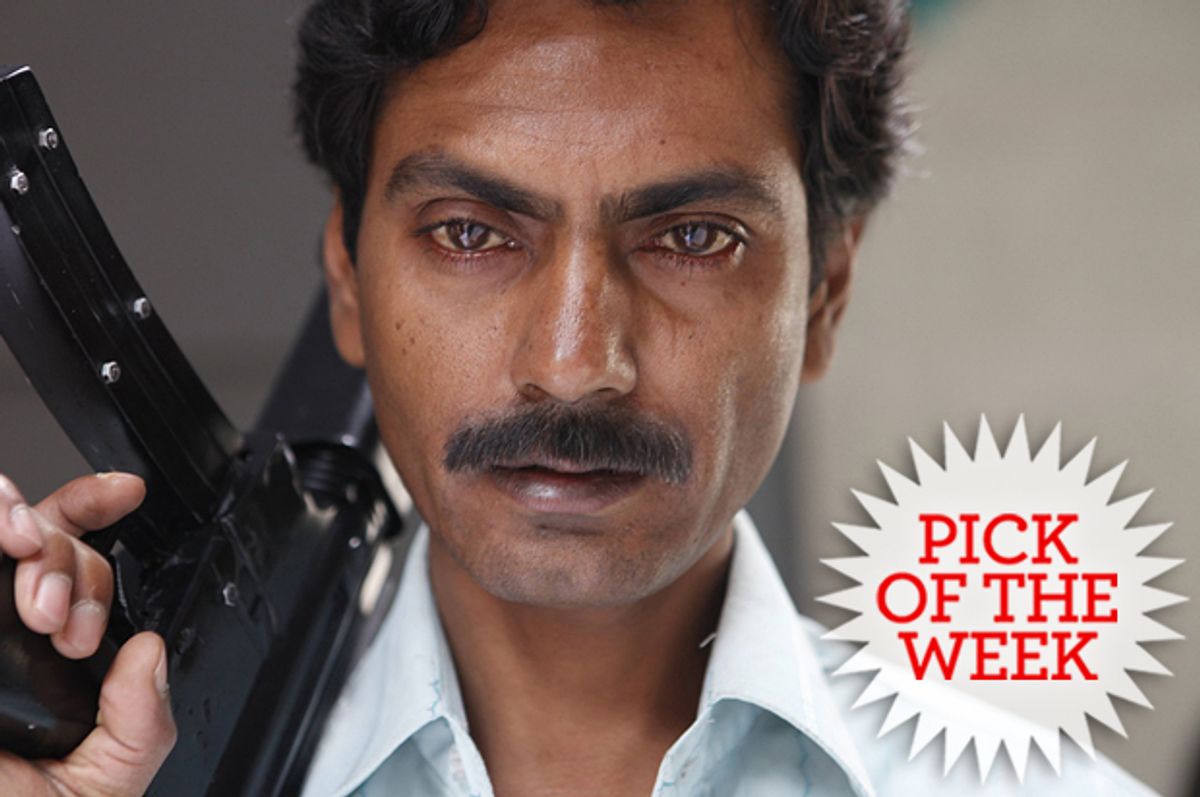 Explosive, violent and profane from its very first seconds, the crime epic “Gangs of Wasseypur” simultaneously feels like a celebration of Indian cinema and an attempt to blow it up and start over. Describing director Anurag Kashyap’s blood-soaked, five-hour magnum opus as a Bollywood movie may be technically correct, but it’s likely to lead Western readers toward incorrect conclusions. (Don’t panic! No one expects you to sit through all five hours at once. The film is being released in two parts, after the model of Lars von Trier’s “Nymphomaniac.”) There are no stylized, candy-colored dance numbers in “Gangs of Wasseypur,” and it’s not a musical in the usual sense, although Kashyap frequently uses Indian pop, rock and hip-hop – some of it exceptionally nasty – to comment on the action. Instead of the saucy but virginal ingénues of mainstream Indian movies, we see the women of “Gangs of Wasseypur” screaming and dying in childbirth, elaborately cursing out their faithless, whoring husbands and threatening their rivals with violent death.

Creating a moment for a would-be cult movie isn’t as straightforward as it used to be, especially a movie as gleefully devoted to violating norms and conventions as this one. The total audience for “Gangs of Wasseypur” is no doubt divided between genre enthusiasts who saw it months or years ago – it’s been floating around the Internet, and available on foreign DVD, since shortly after its Cannes premiere in 2012 – and ordinary civilians who’ve never heard of it. Whichever camp you fall into, the fact that something this unusual and distinctive is getting a glimpse in American theaters represents a breakthrough. Producer Adi Shankar has described “Gangs” as “an important and monumental movie for my people,” comparing it to other influential global hits from developing nations, like South Korea’s “Oldboy,” Hong Kong’s “Infernal Affairs” or Brazil’s “City of God.” He’s trying to hype the picture, of course, but that gives you some idea of how it’s seen in India.

Instead of playing out against some historical fantasy or luxurious playland built at a Mumbai studio, “Gangs of Wasseypur” is set in a real and distinctly unglamorous place, the grimy and impoverished state of Jharkand in eastern India, where most of the country’s coal is mined. (I gather Kashyap mostly used locations in the neighboring state of Bihar.) Wasseypur is an insignificant flyspeck by Indian standards, a small industrial city with roughly the same cultural cachet as Scranton, Pennsylvania. This movie is a violent, operatic melodrama, not a documentary, but Kashyap incorporates numerous snippets of archival footage and draws extensively on the region’s actual history. It’s apparently true that for decades Wasseypur was dominated by the conflict between two crime families, the Khan and Singh clans, and their various attempts to outmuscle a Muslim caste called the Qureshis, who traditionally dominated the town. (It took me a while to figure out that describing the Qureshis as butchers was not an epithet, but a reference to their trade.)

I could spend several paragraphs trying to disentangle a plot that encompasses more than 60 years and dozens of characters, from British rule to the age of smartphones and Kalashnikovs, and I probably still wouldn’t get it right. If you give yourself time to get used to “Gangs of Wasseypur,” the principal characters and conflicts come into focus, and the blend of familiar and unfamiliar ingredients (from a Western perspective) begins to balance out. On one hand, the dense context of Indian culture, politics and religion can be dizzying, though I also found it invigorating. Early on, the film’s narrator – who we eventually learn is a Khan family lieutenant named Nasir (Piyush Mishra) – helpfully explains that the Wasseypur wars were never about Hindu vs. Muslim, or Shia vs. Sunni. In this particular dispute, almost everyone belongs to the same sect of Islam, and wants to kill each other over more ordinary bad reasons, like money, power and family honor.

You really don’t need to follow all the details about Indian party politics and the corrupt post-independence economy inherited from the British Raj and how organized crime took over the miners’ union. (Although some of those things translate pretty clearly, now that you mention it.) Although rooted in a specific place and a specific social history – principal writer Zeishan Quadri has barely bothered to disguise the names of the real-life Wasseypur gangsters, which seems foolhardy – this is essentially a story as old as mythology and as contemporary as “The Sopranos,” and I’m pretty sure Kashyap has both those models in mind. It’s a story about charismatic killers, men we love to hate, characters who are depraved, ennobled and finally doomed by their disregard for ordinary human decency and their devotion to an endless cycle of violent retribution.

“Gangs of Wasseypur” has inevitably been compared to the “Godfather” movies, and thematically the two are pretty close. Kashyap’s main character, at least in Part 1, is a Michael Corleone type called Sardar Khan (Manoj Bajpal), the orphaned son of a legendary local bandit who has vowed revenge on Ramadhir Singh (Tigmanshu Dhulia), the despicable politician who ordered his father’s death. Sardar starts out with a legitimate grievance and a more or less honorable purpose, but long before his day of reckoning with the Singh clan becomes a sadistic killer, a womanizer and bigamist (it’s not clear whether this is OK, in the local version of Islam), a deadbeat dad and a crime lord more vicious and ruthless than the enemy who has wronged him.

But in its reckless, madcap energy and its combination of brutality and humor, Kashyap’s filmmaking is far closer in spirit to Sam Peckinpah or Sergio Leone than to Francis Coppola. He gives far more screen time and attention to Sardar’s disgruntled wives than Coppola ever gives the Corleone women, and without giving too much away, Sardar’s contemptible treatment of the fiery Nagma (Richa Chadda) – who at one point chases him out of a brothel with a stick – and the seemingly shy and servile Durga (Reema Sen) will prove fateful. Kashyap’s use of musical interludes, in which song lyrics drive along the action or reflect it to comic or ironic effect, variously suggests Martin Scorsese, David Chase and (most obviously, to Indian viewers) a puckish repurposing of the conventions of Bollywood melodrama.

I have no idea how deliberately Kashyap and his collaborators set out to combine the idioms of Eastern and Western cinema, and how much that organically arose from the material. It doesn’t much matter. “Gangs” never remotely feels as if it’s pandering to non-Indian audiences, or even considering them – as I understand it, most people in India had never heard of this place or its intra-Muslim gang war either. In all honesty, five-plus hours may be overkill with this material (seeing Part 1 may well be enough), and here and there, as the story grows ever more byzantine, Kashyap gets bogged down in Tarantino-style quotation and self-regard. But as a rich and exuberant character-driven crime saga in an idiom you absolutely have not encountered before, and a dense, unsentimental portrayal of the collision between democracy, capitalism and gangsterism on the frayed margins of the post-colonial world, “Gangs of Wasseypur” is a signal achievement in 21st-century cinema.

Both parts of ”Gangs of Wasseypur” are now playing at the Film Society of Lincoln Center in New York and the Globe Cinema in Calgary, Canada. “Gangs of Wasseypur -- Part 1” is now playing in Chicago, Houston, Los Angeles, Milwaukee, New Brunswick, N.J., Philadelphia, Pittsburgh, San Diego, San Jose, Calif., Washington and Columbus, Ohio, with “Part II” to follow in those cities beginning Jan. 23. Other cities and dates will follow, with VOD and home video release in April.