This is my blood: Why a former punk rocker agreed to raise her daughter Catholic

I once saw the church as intimidating, but now I saw promise. The pope had changed my worldview. So had my daughter 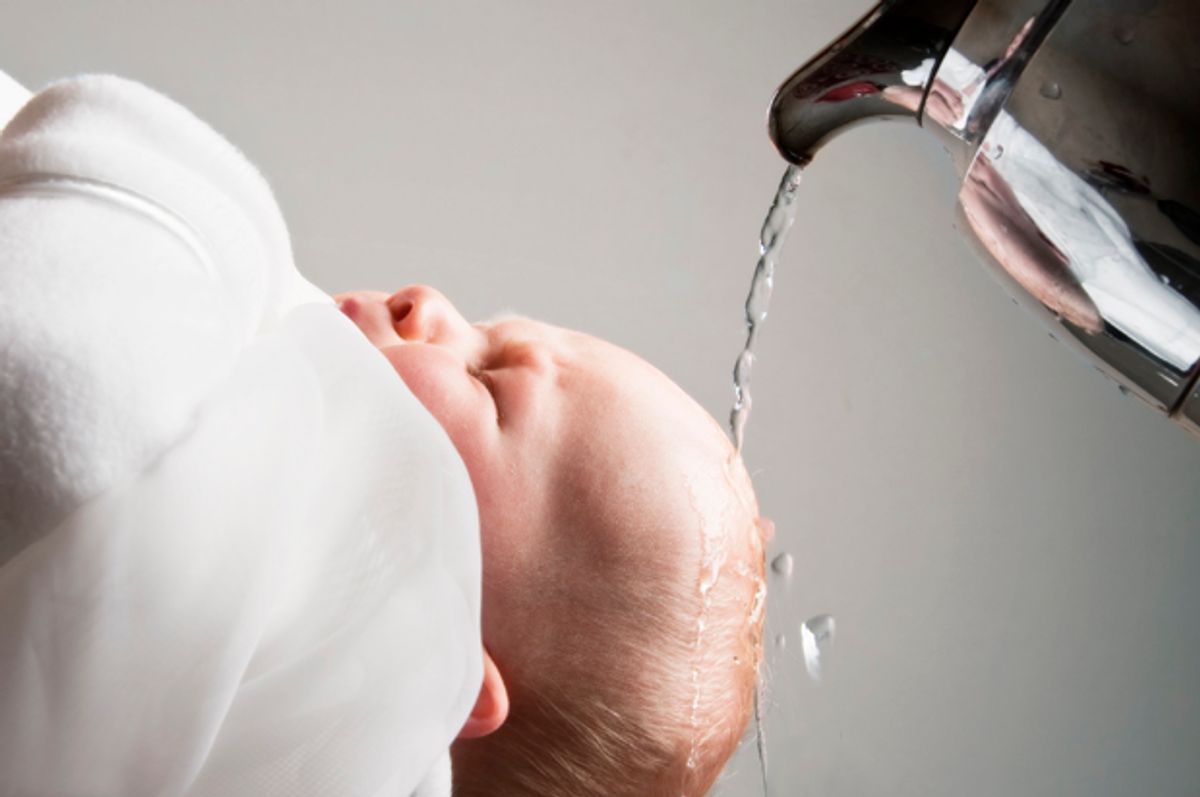 In my infant daughter’s palm, the gold crucifix looked as if it were resting on the belly of a chubby pink starfish. The fine chain from which the cross dangled wound once around her wrist, trailing across a white baptism shawl trimmed in fringe. The necklace was a family heirloom handed down from the baby’s namesake—her long-departed great-grandmother. Before we left for the church, the godmother draped the chain around the baby’s neck and closed the clasp.

Much has been made of the Francis Effect — the magnetic, humanitarian charm of His Holiness — drawing back parishioners who had given up on the church, but it also extends to those of us who might have never been drawn to Catholicism in the first place. When the Francis Effect landed at our doorstep, it inspired me to entrust the Catholic Church with no less than my daughter’s spiritual heart.

My husband and I, 10 years into our marriage, discussed having a child. There was much to consider. Could we afford it? Did we have the energy? Then, a question that took me quite by surprise: Would you, he asked, be willing to raise the baby Catholic? As a former punk rock kid recently returned to my liberal Presbyterian roots, his request gave me pause.

My introduction to Catholicism was inauspicious. In 2003, my husband and I, still newlyweds, arrived at an Army post to which he had been assigned. At the newcomers fair, we stopped to chat with the priest from the post’s Catholic chapel. My husband explained that we’d had a hasty legal marriage before he deployed, but we were interested in a church ceremony.

“It might be a little complicated” my husband said. “You see, I’m divorced…” The priest winced. “And the marriage wasn’t annulled.” A prickling, uneasy heat traveled up my legs. “And my wife isn’t Catholic…” The priest winced again.

We waited for the priest to say something about helping us plan, or at least invite us to his parish office for further discussion.

“Mike, to be honest, I’m worried about your mortal soul.”

I was speechless. Who says that? Who thinks that?

Over a decade later, I agreed, after much deliberation, to a Catholic upbringing for our daughter, born last spring. Why? The cheeky answer would be that marriage involves compromise, even if I only make it a biannual event. In seriousness, credit is due, in no small part, to His Holiness. In his view, our interfaith union is a blessing, not an abomination. He has said that any Christian marriage is a "real vocation, just like priesthood and religious life...” If he held a scorched-earth view like that Army priest, I wouldn’t have considered it, but Francis carries the marks of a social reformer, on this issue and several others. Where I once saw intimidation, I now saw promise. That the pontiff once worked as a bouncer only added to his credibility.

I worried that anti-religion or atheist friends would assume that willingness to have my daughter baptized represented a drift toward the fanatical on my part. But baptism, I found, can bring out a softness even in the most cynical. Maybe because there is a child involved. Maybe there’s something about innocence that reaches us where intellect cannot.

A baptism can turn into a ritual done by rote, the purpose obscured by the busywork of shopping for the white dress, ordering invitations, planning the lunch. Hostess anxiety kicked in. Did I want to serve chicken marsala or orecchiette with broccoli rabe and sausage? The wrong dress was delivered, a stiff organza festooned with iridescent sequins that resembled an elaborate lampshade. The bakery promised a cake with a cross of pink frosting roses — I pictured the blush of a new petal, ballet slippers. Instead, I opened the box to find a shade that could best be described as Vegas Bordello, or possibly Flamingo Explosion.

Intention returned to the fore when we sat down with Sister Kathy for the pre-Baptism interview. Gentle and kind, she saw no issue with ours being an interfaith marriage, and the fate of our mortal souls was not brought into question. At the conclusion, she asked, What do you like about the Catholic Church, and what would you like to see change?

My husband felt that priests should be allowed to marry and have families, and that divorced parishioners and non-Catholics should not be forbidden from taking communion. I wanted to see women in governing roles, as well as significant advancement on gay and transgender issues.

What about Catholicism appealed to me? Despite not feeling the call to conversion, there was much that I loved. The prominence of Mary and the saints, and the sensory richness of Mass, the colors and the Latin recitations, the heady incense as the censer swings by. I admired the rituals woven into everyday life. Crossing yourself in a moment of duress or gratitude, or appealing to Saint Anthony when you’ve misplaced something. Saint Anthony, Saint Anthony, please come down. What was lost must now be found. Around the robust Christian comedy circuit, Presbyterians are referred to as “The Chosen Frozen,” and that buttoned-up austerity has its limits. For whatever reservations I had about Catholicism, there’s something right up-front about it.

The interview illuminated where my husband and I were yoked together, our respect for tradition twined with the possibility of progress. Our emotional stake in the sacrament became heart-piercingly clear: When you baptize a child, you’re voting for hope.

The weekend before the baptism, my friend Linda Jimenez was ordained at the storied Fifth Avenue Presbyterian Church in Manhattan. A swarm of clergy stood for her, at least 30 of them female. Down in the front pews, I saw our friend John Russell Stanger, the first out LGBTQ Presbyterian minister ordained in Texas, in his white alb and nose ring. After a laying on of hands, Linda delivered her first communion as pastor.

Reverend Anita, who had just presented Linda with her minister’s robe and stole, held the tray of bread. As I tore off a piece, she said, “This is my body.”

Praise be to God.

I dipped my bread in the chalice Linda held. “This is my blood.”

Praise be to God.

I returned to my seat, happy to have received not just the blessing of communion but the privilege of witnessing a woman poised to embark on a powerful journey. How wonderful to have so many years of evolution ahead of her. Years of being part of the solution. What a gift.

On the day of the baptism, the godmother, my sister-in-law, dressed the baby in a simple cotton gown bordered in old-fashioned daisy lace. She fastened the pearl buttons up the back, one, two, leaving the top button undone, and tied the long sash into a bow.

The slant of the afternoon sun through the stained glass windows cast jewel-toned panels of light on the sanctuary floor. The deacon dipped his fingers in chrism, touched the top of my daughter’s head, and then reached under her collar and dabbed the oil on a spot over her little hummingbird heart.

At the altar, my husband tilted our drowsy daughter over the marble basin, and the deacon took up the silver baptismal shell, the holy water running in rivulets through her dark hair. In the name of the Father, the Son, and the Holy Spirit, love built a bridge between two denominations and two families, reaching across the aisle and out into the world, anointed.

As we drove from the church, we passed a statue of Christ, his arms extended. I looked at my daughter reflected in the mirror above her car seat and prayed, I give her to you, God. She’s both yours and ours, yet at the same time, she belongs to no one but herself.

After lunch, coffee and dessert were passed around. While my daughter lounged in her father’s lap, I tapped the side of my water goblet with the blade of my knife. Everyone raised a glass. What to say?

I remembered departed family with us in spirit. I thought of Linda coming into her own as a minister. I wondered about this faith into which daughter had been welcomed, no way of knowing that weeks later, the Pope would demote prominent cardinal Raymond Burke, who has criticized the pontiff’s relatively progressive tone on issues such as homosexuality and abortion. Then, just this past week, Sister Donna Markham, a Dominican nun, was named the first female leader of Catholic Charities USA, thus affirming that the church, like a child, can grow right before your eyes. Parental patience, however, is still required, given the Pope's recent comments that there should be limits to free speech, and his assertion, during a Mass held in Manila, that "the family is threatened by growing efforts on the part of some to redefine the very institution of marriage...These realities are increasingly under attack from powerful forces, which threaten to disfigure God’s plan for creation," which many are interpreting as a hardline stance against gay marriage.

Back to the toast. I took a breath and kept it simple. “God bless the friends and relatives who make up our family. Let’s have some cake.”