Republicans in Congress are wasting no time trying to dismantle the safety net. Here's what's at stake 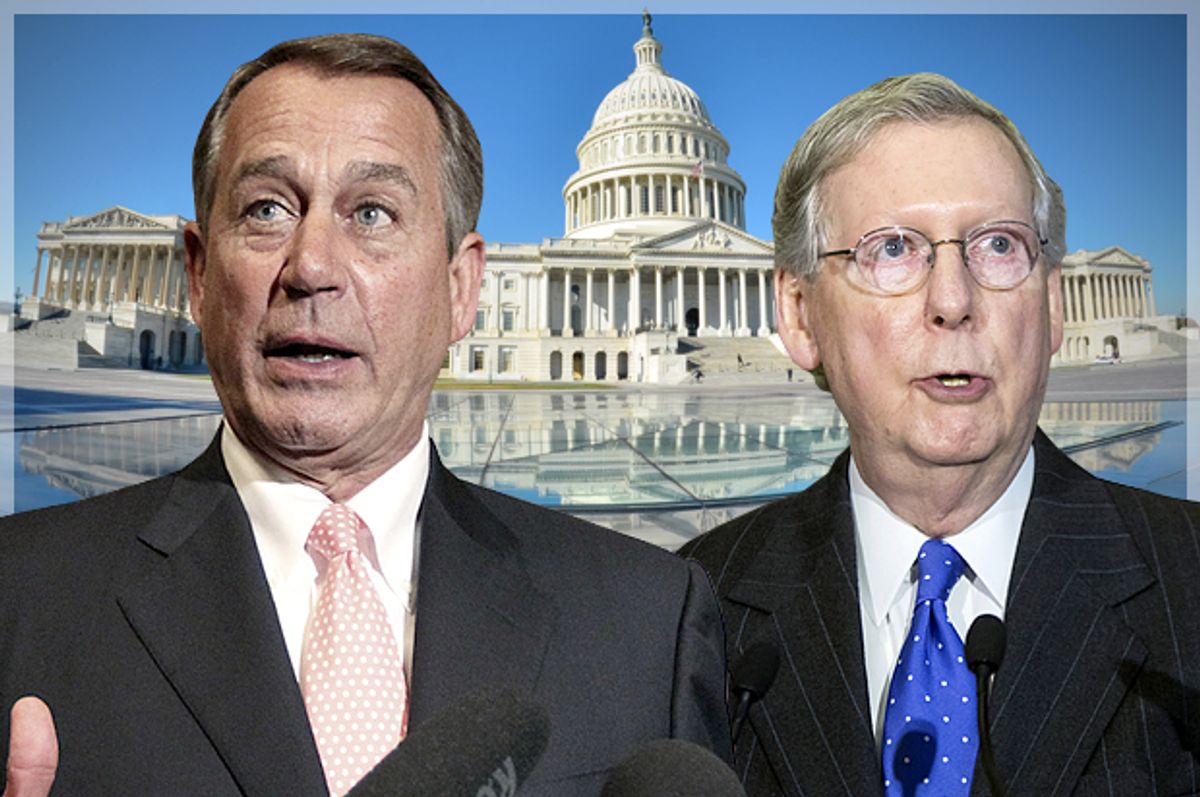 Polls consistently suggest that the No. 1 women’s issue is the economy.

Female voters are split, particularly by marriage between the Democrats and Republicans. Married women slightly prefer Republicans, while single women overwhelmingly prefer Democrats. The reason is simple: In an economic system that overwhelmingly favors the married, single women tend to live more precariously and rely on programs that Republicans want to eviscerate. And there's another factor that will only increase such discrepancies: Conservatives are increasingly pushing to cut programs for seniors. In our economy, where care-taking responsibilities fall overwhelmingly to women, this will mean more women will have to shoulder the burden of healthcare. Austerity will burden women, particularly women of color.

The politics of austerity

Even though the deficit has declined dramatically, and there is very little evidence for a long-term budget crisis, Republicans are still hellbent on shredding the social safety net. As Dylan Scott reports for Talking Points Memo, “Republicans are seizing a once-every-20-years opportunity to force a crisis in the Social Security disability program and use it as leverage to push through reforms, a long game that they have been quietly laying groundwork for since taking control of the House in 2010.” This even though the crisis they worry about is actually entirely mythical. But America is on the road toward a retirement crisis, as a squeezed private pension system and a squeezed public pension system collide.

Long story short: Millions of American are going to retire without adequate savings to survive. This will mean an increasingly despairing elderly population, but another important impact could be a large step back for women in the workplace. This crisis doesn’t show any signs of abating -- young people are pushing off saving because they are racked with student debt. A Demos report finds that a student who graduates with $53,000 in debt will expect to have a lifetime wealth loss from that debt of $208,000. These debt burdens primarily affect low-income students and students of color.

The retirement crisis is not inevitable and nor is it the fault of workers. As Dean Baker has noted, most of the gap in public pensions was the result of the financial crisis of 2007-2008. Matt Taibbi points out in Rhode Island, the state government is paying $2.1 billion in fees over 20 to hedge funds, while freezing cost of living adjustments for workers at a cost of $2.3 billion over the same period. Yet hedge funds are a hugely overrated asset class, and the state government would be better off just investing in an index fund (one reason CALPERS recently divested). If retirement security is seen as a three-legged stool of Social Security, employer pensions and private savings, we can see that all the legs are being undermined. Pensions are more and more likely to be defined contribution instead of defined benefit - if workers have them at all. 401k plans extract hundreds of thousands from workers in fees. Private savings are plummeting  as incomes are squeezed. At the same time, Social Security is under assault from increasingly radical conservatives.

The decimation of the housing sector and the war on pensions means one thing: a looming retirement crisis. Generations of elderly people will find themselves without private savings and find Social Security and Medicare have been hacked apart by Republicans, bowing to the demands of rich donors (see chart). This will mean once again elderly poverty will be a pressing concern, even though we have spent decades making progress toward eliminating it. But much this burden will inevitably fall on the children of retirees: mainly women. Last year, the New York Times reported on a disturbing trend: After decades of increasing, female labor force participation is plummeting (see chart). Most disturbingly, many of these women were dropping out during prime earning years. One significant reason is to take care of elderly parents. Research by Pew shows that women are far more likely to take a large reduction in hours, take off time, quit a job or turn down a promotion to care for a child or family member (see chart). A large academic literature suggests that women will bear the brunt of the caregiving activities for elderly retirees. Research suggests that, “Daughters are twice as likely as sons to become the primary caregiver.” Richard Johnson and Anthony Lo Sasso find, “time to help parents strongly reduces female labor supply at midlife.” Research also confirms that women do not care for elderly parents because they are already unemployed, but rather, “Thus, the causal relationship between employment and caregiving in late midlife is largely unidirectional, with women reducing hours to meet caregiving demands.” In a recent study Yeonjung Lee and Genan Tang find, “Results show that women caregivers for parents and/or grandchildren were less likely to be in the labor force than non-caregivers and that caregiving responsibility was not related to labor force participation for the sample of men.” AARP estimates that a caregiver over 50 will lose $283,716 in wages and benefits for men and $324,044 for women. There are costs for businesses too, an estimated annual loss of $33.6 billion in lost productivity. But the brunt of the burden is borne by the poor, women and people of color. The impact of the retirement crisis could set back the progress of women in the labor force by decades.

One solution to the retirement crisis is the financial sector, which benefits the rich while undermining the wealth of the poor. Rep. Chris Van Hollen has laid out the best way to do that; his recent proposal is centered around a financial transaction tax projected to raise $1.2 trillion in revenues. The tax wouldn’t just raise revenues; there is strong evidence it could reduce market volatility and rent-seeking (rampant on Wall Street). The money raised from the tax should be used to bolster the social safety net slowly being shredded by the right. It should also be used for public investment in infrastructure.

A more structural issue is the nature of uncompensated work in a capitalistic society. While it is unlikely that we can decimate patriarchy in the near future, one solution could be socialize it. By turning over caregiving, early childhood education and other labor that is currently performed by women (without pay) to the public sector, women will be free to pursue their own interests. Labor that was once uncompensated will now be performed for decent wages creating millions of public sector jobs (massive cuts to public sector jobs have also taken a toll on female employment). Further, we should ensure that both women and men have access to parental leave, sick leave and an adequate pension. These reforms will be costly, but the $1.2 trillion that a financial transaction tax would raise could easily cover these costs. Our tepid commitment to gender equity will be rendered useless if continued austerity falls entirely on the shoulders of working women.