A 5-year-old gets billed for missing a birthday party

How a schoolboy created an international incident 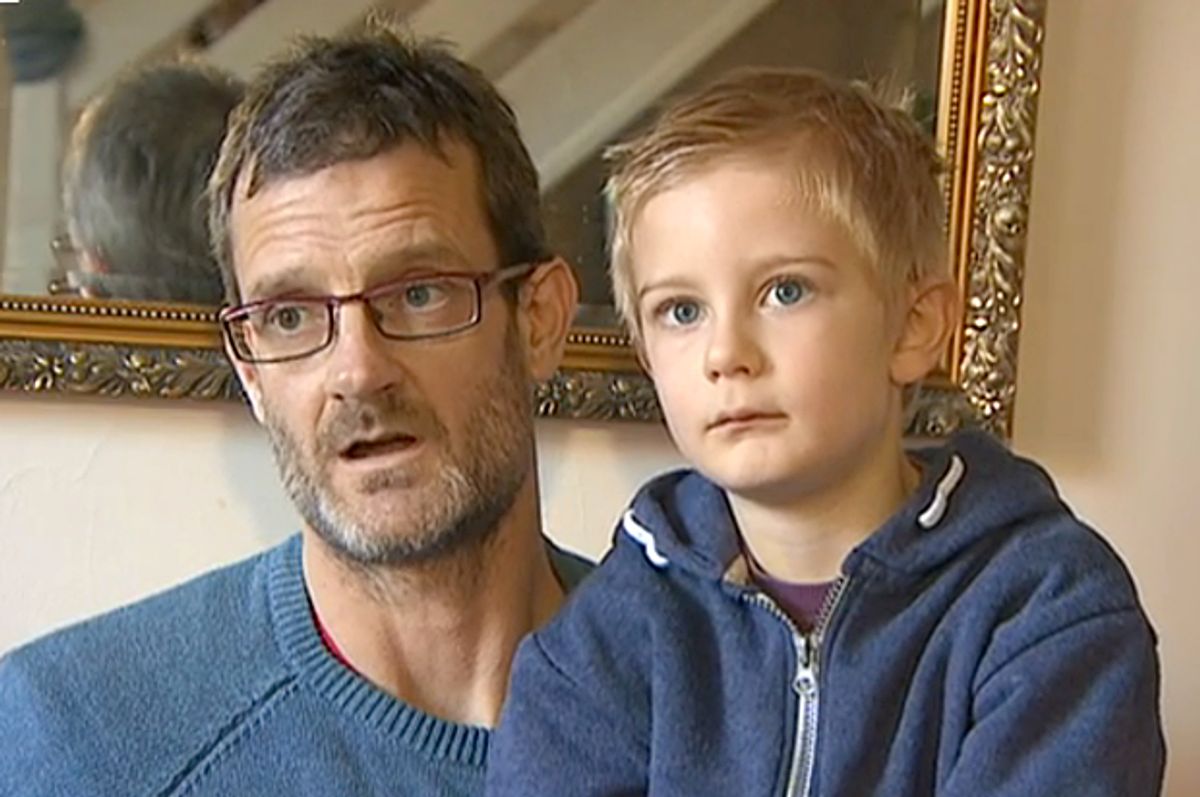 Let's play a game called "Spot who's being childish here."

First, there's actual 5-year-old Cornwall schoolboy Alex Nash, whose father, Derek, says Alex was invited to a birthday party at Ski Slope and Snowboard Centre, a dry ski slope in Plymouth, Devon, shortly before Christmas. Soon after, however, his parents realized they'd made prior plans for Alex and his sister to spend time with their grandparents, so they did that instead. That might have been the end of it, until Derek discovered an envelope in his son's school bag last week. In it was an invoice and a "child's party no show fee" for £15.95 (about $26).

Mr. Nash claims he then went to the child's home and spoke to his mother, Julie Lawrence, explaining, "When she answered the door I told her I had found the invoice in my son’s school bag and that I wasn’t happy about it. I told her I would not be paying her the money. I told her she should have spoken to me first and not put the invoice in my son’s school bag." He also claims Lawrence has threatened to take them to small claims court.

Naturally, the whole thing then spilled out into social media, with Alex's mother, Tanya Walsh, posting on Facebook that "I did not realize that you had to pay for each child, as you never mentioned anything about money when we spoke" and saying, "I apologize for not letting you know, but I did not have a phone number or an e-mail for you to let you know the situation … If I had known that I would have to pay if Alex did not go, then I would have paid you the money, no problem. I do not like fighting with people, and would prefer to settle this amicably." Lawrence, however, shot back that, "My phone number was on the invitation that was sent out to Alex. I don't like fighting with people either, and was not best impressed when Derek turned up on my doorstep, and said you won't get any money out of me, rather rudely, I do admit it rattled me. This is not the first time Alex has not turned up to a party that he has been invited to, either." It then predictably escalated from there.

There's no question that Ms. Lawrence is way, way out of bounds here. Aside from being aggressive and rude, she also, in the words of BBC legal correspondent Clive Coleman, will find it "all but impossible" to collect her £15.95. Lawrence herself said on Facebook that "I didn't mention the money when we spoke because it was a child's party," which seems to make the whole thing pretty open and shut from a contractual standpoint. And from an ethical one, still no. You don't invite someone to be your guest to something and then shake him down if he doesn't attend.

But there's also a series of questionable behavior choices to be laid at the feet of young Alex's parents as well. Scheduling conflicts, especially when you have two young children, are understandable. But then you have to make things right. What Alex's parents did instead appears to have been to make minimal efforts to contact the birthday boy's family – or even the venue -- immediately prior to the party, and to not come back in the ensuing weeks with a birthday gift, apology and/or offer of a play date. You know what I haven't heard in any of this? That Alex himself was ever asked to do the courteous thing and tell his friend he was sorry. Instead, Mr. Nash notes that "I drive all around the South West for my job and I have talked to quite a few people about this." His partner took the dispute to Facebook. And the family has been speaking out, doing interviews and posing for photos with their son, to the BBC and the Plymouth Herald. Also not cool, and not helpful to their child, who still has to go to school with the kid whose party he missed. What's the point of taking the dispute public, exactly, except to shame the other family?

I fully get the exasperation when someone doesn't come to your event when they said they would, and the protective disappointment when it's your kid's feelings on the line. For my own children's birthday recently, the girls wanted to go to see different movies with their respective friends. Invitations were emailed, RSVPs and regrets were received, tickets were purchased, and then, on the day, one daughter had a buddy fail to appear. When I texted the girl's parent moments before the movie started to ask if everything was OK and to say I'd hold her ticket at the box office, I got back a simple "She can't make it."

Did I briefly feel like writing back, "Then I'd like $15 and an apology to my daughter?" Sure. Did I suck it up instead? Also yes. Did a friend just a few days ago regale me with a similar tale of her lingering sadness about the people who RSVPed for her wedding and then, without a word, just didn't come? Yep. But here's what you do in these situations. You say, "We were so sorry you couldn't make it" and then you seriously reconsider inviting that person or people to your future events. That's all. Because you're the host and that's your job. It's not a "Let's all go in on a place in the Hamptons" situation. You sent the invitation; that means the person is your guest. End of story.

The children's school, meanwhile, has reportedly apologized for passing on the envelope from the child's mother, calling it "a breach of protocol," and a Ski Centre representative says they are "unhappy" that the venue's name was on the invoice, that they "certainly don't" invoice children. And two boys have watched their parents turn a petty non-appearance at a birthday party into an international news story because they wouldn't just behave in a way that was thoughtful and kind and forgiving. As for Alex himself, his parents say his friend will now no longer play with him.