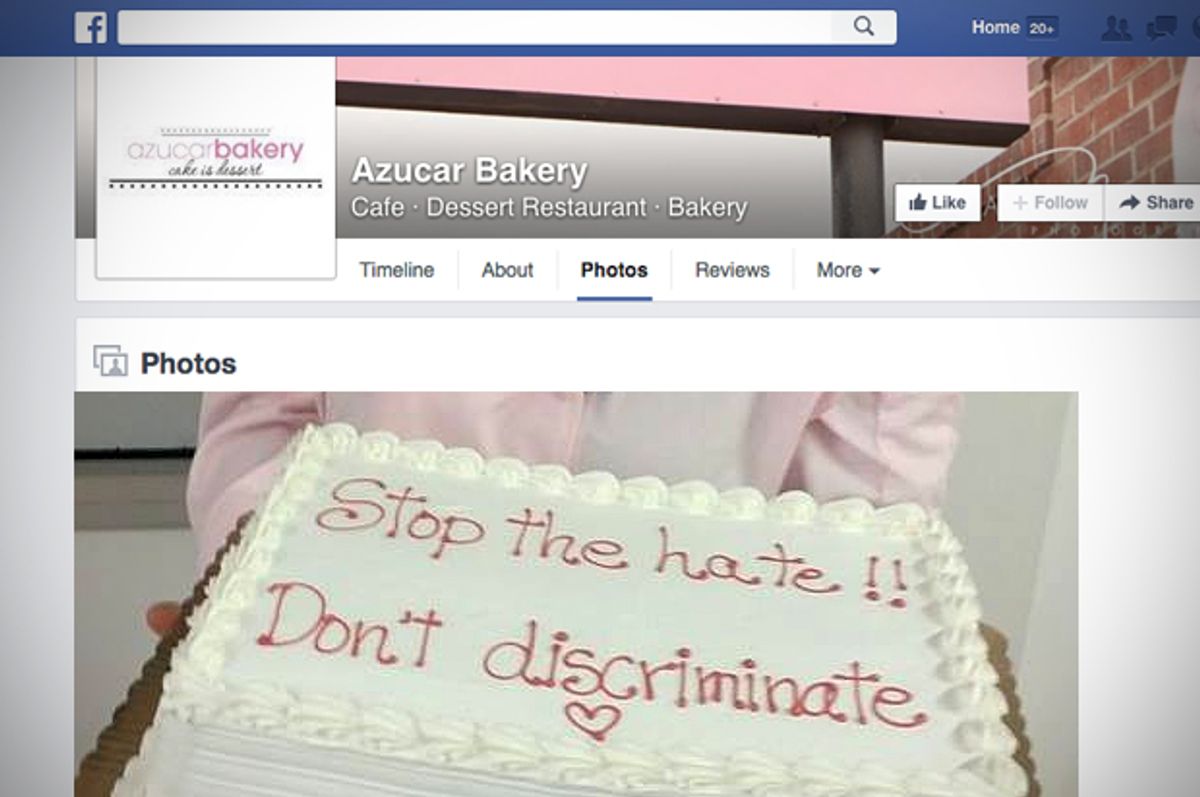 Proving again our bakeries are among the fiercest battlegrounds in the fight for LGBT rights, yet another Colorado bakery is facing investigation for refusing a customer's request for a cake with a gay theme. The twist this time is that the order wasn't for a wedding cake. It was for, as the owners of Denver's Azucar Bakery claim, one with a homophobic messages on it. Now, the turned away customer Bill Jack has filed a complaint with the Civil Rights division of the Department of Regulatory Agencies, claiming, "I believe I was discriminated against by the bakery based on my creed."

Bakery owner Marjorie Silva says that in March of 2014, Mr. Jack requested a bible-shaped cake adorned with phrases like "God hates gays." She says he also said he wanted "an image of two men holding hands with an 'X' on top." She told USA Today this week that "After I read it, I was like 'No way. We're not doing this. This is just very discriminatory and hateful.'" In a subsequent story for the Detroit Free Press, Silva claims she agreed to make the cake, but refused to put the messages on it, offering instead to give Jack additional icing to decorate it himself if he wished. She says he declined. The bakery is now under investigation for religious discrimination, and could go next to the Colorado Civil Rights Commission.

The debate over what consumers have a right to order a bakery to do has become an intense one in recent years, most notably as a result of marriage equality. Just last year, also in Colorado, a seven-member commission upheld a ruling that a Lakewood bakery violated civil rights law when it refused to make a wedding cake for a same-sex couple, and ordered the owner to "stop discriminating against gay people and to report quarterly for two years on staff anti-discrimination training and any customers he refuses to serve." And an Oregon bakery closed down after being found guilty of "unlawful discrimination based on sexual orientation" when its owners also refused to make a couple's wedding cake.

All requests are not equal, and all customers are not the same. A couple just wanting to celebrate their marriage is not the same as Bill Jack. Mr. Jack is a cofounder of a Christian organization called Worldview Academy, and claims have spent several years leading "a creationist youth ministry." And if he truly did request a cake with the phrase "God hates gays" on it – a claim he has not disputed -- I believe any bakery in America should have the right to tell him that they are not in the business of making bigoted confections.
However, I believe that nobody should be forced to write a message they don't believe in, period. And if I fully, wholeheartedly support Azucar's right to say no to Jack's ludicrous, hateful request, then I also have to stand by my belief that other bakers, whose religious and moral views are in sharp contrast to my own, should still also have the right to say there are certain jobs they won't do too. It's not the same as refusing to hire someone on the basis of orientation, or refusing service to a person who sits at your counter. It's about a contractor having the right to say no to a job. Mr. Jack isn't being discriminated against for his beliefs; he's being turned down as a client. As University of Denver law professor Nancy Leong told USA Today this week, "This is not a situation where a business owner denied service to somebody. She offered to accommodate him to the extent that she could. In fact, requiring her to write that message would infringe on her own free speech rights." That's a right that cannot be selectively defended. That ideal should apply to whomever is wielding the pastry bag, not just those whose convictions we share.

On their Facebook page this week, Azucar posted a photo of a new cake created in light of the recent controversy. It read, "Stop the hate! Don't discriminate." It was a message written of the baker's own free will, with no one forcing her to say it. That's what makes it worth sharing. That's what makes it sweet.