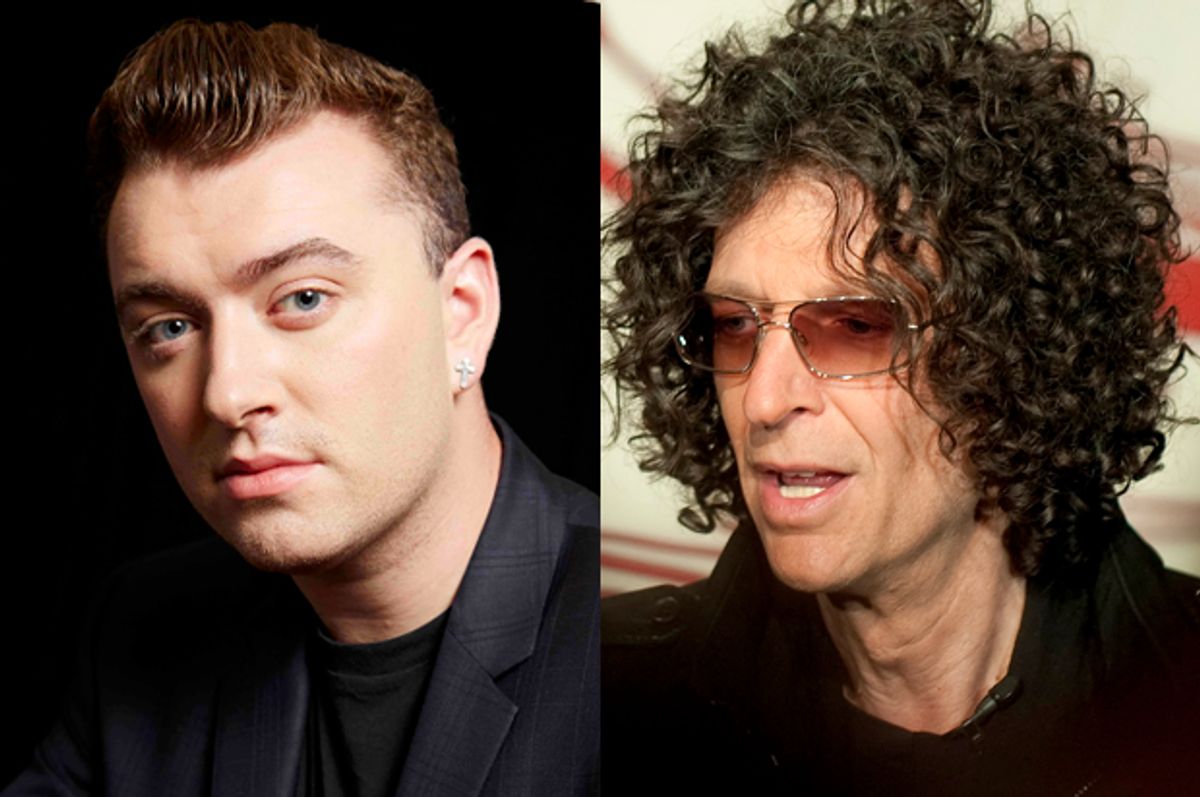 Howard Stern may want to reconsider that side career as a music critic. On his SiriusXM show this week, he introduced British Grammy nominee Sam Smith's latest single with some wildly backhanded admiration.

"He's an ugly motherf—ker. He's fat and I love it." Stern observed. "Oh, is he gay? He looks gay to me. Not that anybody looks gay, but he does seem effeminate. Cool. I like that he's chubby and gay. That's why I love him. He's one of those guys I feel like, he's really good but I feel like that will be his only hit song... That's how good that song is. He's fat and gay and little girls worship him. That's when you know you have a good song and a good voice… I'd like to get him in here and congratulate him on beating the odds." But I'm not sure Sam Smith is touched by praise. On Twitter this weekend he didn't address the comments directly, but did note, "Can't believe what I've just read. Ignore."

Howard Stern has managed to carve out a very lucrative and more than thirty year career for himself by saying outrageous things. He's been a consistent moneymaker for the FCC, racking up millions in fines while consistently courting controversy with a regular assortment of bits involving substance abusers, porn stars and Stern-identified "retards." His observations about Smith shouldn't come as any huge surprise. What's more of a surprise, really, is Stern's continued and devoted following among so many liberal listeners who dismiss his bullying commentary as simply being provocative. Oh, that Howard, that's just his way of joshing around. He's pro choice and he makes fun of Sarah Palin! He supports AIDS causes! He makes fun of homophobia all the time! Three years ago, he did a rant on his show about "what's going on out in middle America, with these anti homosexual groups and how it's affecting teens and teen suicide of gay people… They make these kids so miserable that they're killing themselves."

Here's how you make gay kids miserable. Sometimes it's extremely aggressive acts like conversion therapy or physical intimidation. And sometimes it's a simple har har har, look at that fat gay guy over there. He looks so gay. Perhaps the 61 year-old Stern has long forgotten what it feels like to be the outsider kid walking through the school halls, waiting to be casually laughed at by the cool kids for being "effeminate." But it's the current reality for a whole lot of young people, who don't need that schtick endorsed or legitimized.

To set the record straight, Sam Smith is, in the words of former Stern Target Lena Dunham, not that fat. He also can't be a one hit wonder because "I'm Not the Only One" is his second hit. He's also, by the way, still one of the first and only openly gay performers to achieve the kind of Billboard success he's currently enjoying. He's attained something special in music history. He's important. It's not that he's above mockery – I still wait in hope of Taran Killam giving us more "Very Somber" Sam Smith on "SNL." And if he were a buddy of Stern's who had taken his comments as friendly ribbing, the remarks might have a different context. As they stand though, they're just dismissive and mean, not just to Smith but every kid who's right now hearing something similar in the cafeteria, by some wiseguy who feels he has the right to pass judgment on him and exasperatingly, pretend he's being benevolent about it. And Stern can act like a supporter of gay rights all he wants, but his snide and ignorant attitude speaks for itself.