"The Duke of Burgundy": A tender tale of lesbian bondage

Believe it or not, this kinky, dreamlike fable made in the style of '70s softcore is a moving relationship drama 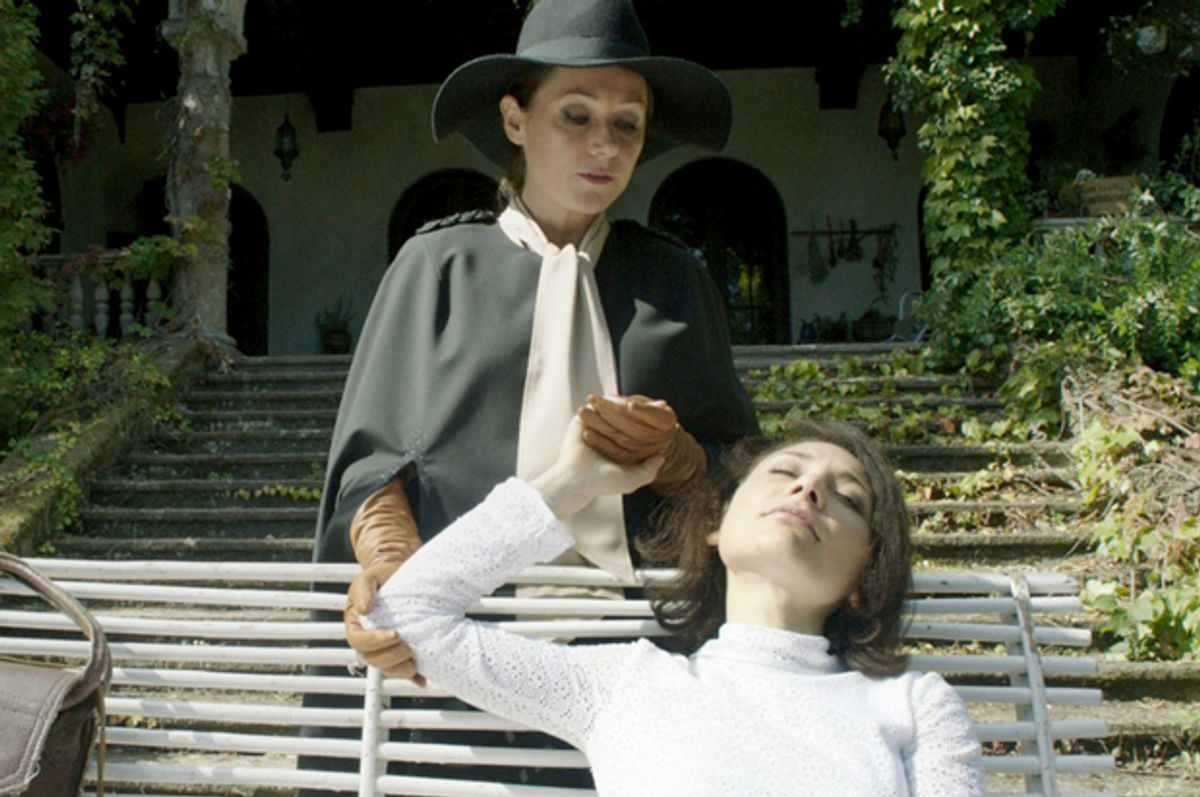 So if I tell you that “The Duke of Burgundy,” the new movie from aspiring English cult director Peter Strickland, is a tender and artful indie drama about two people who love each other but can’t quite get their relationship to work out – wait, you’re already yawning! In fact, you’re asleep! (That seems to have been the reaction so far to the “The Duke of Burgundy,” which opened last week in New York and Los Angeles, and is also available via VOD.) If I tell you that the relationship in question is a kinky S/M partnership between two women, and that the film was made in seductive and pitch-perfect imitation of 1970s art-house softcore porn — well, I know you too well, don’t I? Because you just woke up.

Strickland got some attention on the margins of the film world a couple years back for the equally peculiar “Berberian Sound Studio,” which combined creepy atmospherics, black comedy, social realism and an obvious passion for the stupid but irresistible conventions of trashy Italian horror. If that was a horror film with no monsters and no blood — not counting the gallons of glop employed in the terrible movie-within-a-movie — then “The Duke of Burgundy” is an erotic film with little or no nudity and only a handful of artfully veiled sex scenes. I won’t claim it is devoid of hotness — quite the contrary — but you have to fill in the details yourself, and those who just want to see two hot girls getting it on will do much better elsewhere.

If you think there’s something inherently pervy in a movie about a lesbian relationship made by a guy, you might have a point. But the level of provocation here operates on an entirely different level than, say, “Blue Is the Warmest Color.” (I’m not dissing that film, which I liked.) Strickland is aware of the inherent prurience of his material, and leads us through its hypnotic twists and turns with meticulous care. As we learn pretty quickly, the relationship of dominance and submission between the stern and ladylike Cynthia (Danish actress Sidse Babett Knudsen) and her younger lover Evelyn (Chiara D’Anna) is not what it appears to be on the surface. Cynthia orders Evelyn to role-play as her maid, scrubbing the floors, polishing boots and washing underwear by hand under threat of severe corporal punishment. But as those of you who — how shall I put this? — have read about BDSM issues may already know, the question of who’s really in charge of these scenarios is complicated.

Exactly the same deceptive quality can be found in the dreamlike artifice of Strickland’s film itself, set in a lush and aristocratic European fantasyland that’s entirely nonspecific as to geography and chronology. Are we in Fascist Italy? France in the ‘50s? A 21st-century theme park for perverts? A suppressed short story by Vladimir Nabokov? To all those questions, the answer is: Sure, why not? (I believe the film was shot in Hungary, which qualifies as an all-of-the-above answer.) Strickland excels in a somewhat lost art, the creation of imaginary universes that are governed by their own consistent laws but bear only a distant and symbolic relationship to the real universe. (Special shout-outs go to the cinematography of Nicholas D. Knowland — delivering an old-school film feeling with the digital Arri Alexa — along with the terrific editing of Mátyás Fekete and the design team headed by Pater Sparrow and Renátó Cseh.) He’s like the night-world, dirty-minded, tiny-audience version of M. Night Shyamalan, which is to say he’s about 680 percent more interesting.

But while Strickland’s films already aren’t like anyone else’s, his real secret is that even in this strange constructed world, his characters feel like real people struggling with issues that aren’t exotic at all. Like the repressed English sound engineer played by Toby Jones in “Berberian Sound Studio,” Evelyn and Cynthia are able to glimpse realms of ecstasy and freedom they can’t quite reach. They play out roles that are meant to be liberated and fulfilling and instead have become absurdly confining (not unlike the specially constructed box beneath Cynthia’s mattress, in which Evelyn yearns to be confined). That’s a situation that may perhaps seem familiar to many of us, whether or not we live in an isolated colony of all-female S/M lepidoperists. (Yes, I said lepidopterists, which is a Nabokov reference if I’ve ever come across one. And if you need to go look all that up, I’ll wait.) Which in a sense, maybe we all do.

”The Duke of Burgundy” is now playing in New York and Los Angeles, and available nationwide on-demand from Sundance Selects, through cable, satellite and online providers.