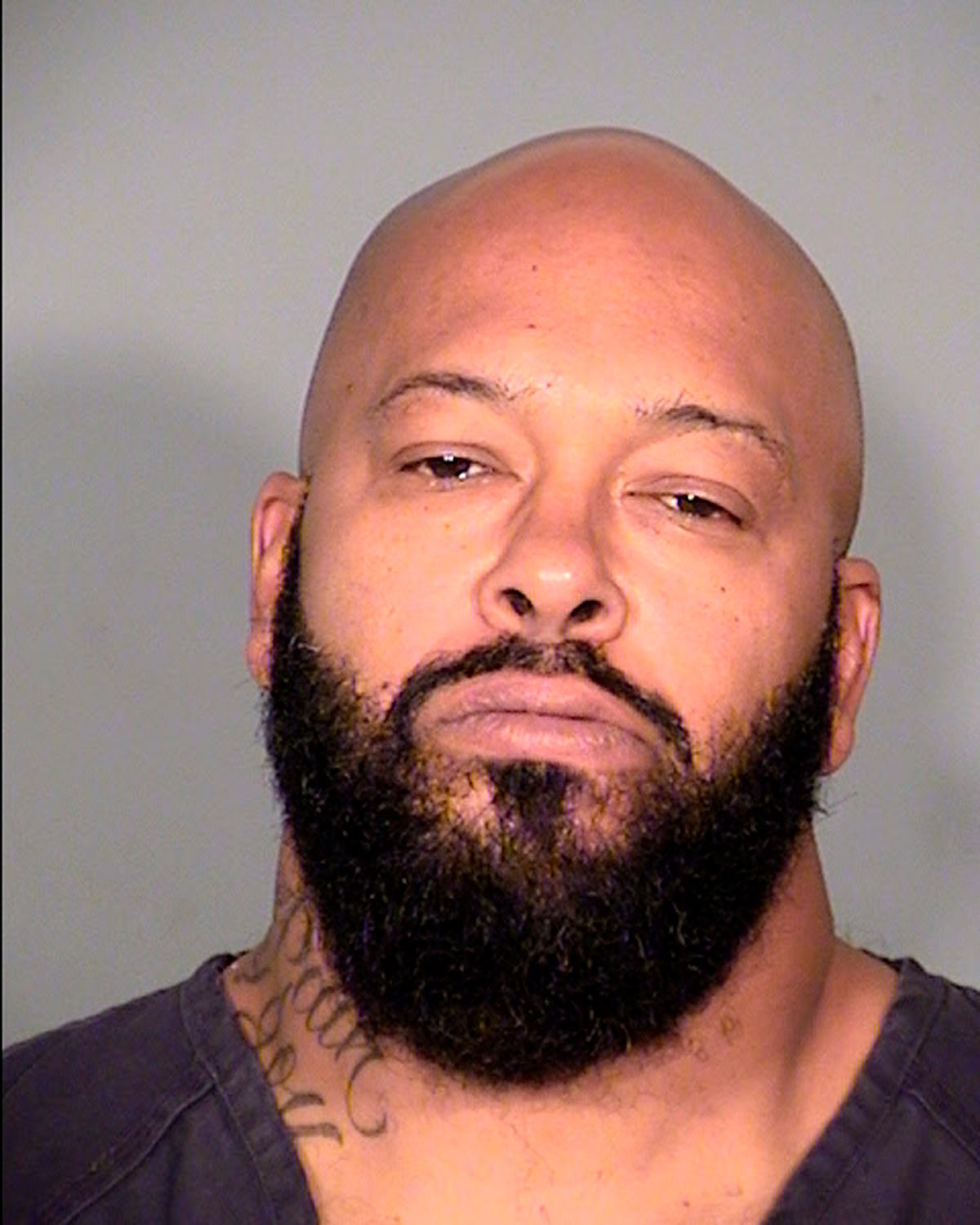 WEST HOLLYWOOD, Calif. (AP) -- Marion "Suge" Knight, the former rap music mogul with a long history of violent crimes, was arrested early Friday on suspicion of a hitting and killing a man with his car and then fleeing the crash near Los Angeles.

Knight's attorney said the founder of Death Row Records accidentally ran over and killed a friend and injured another man as he tried to escape attackers Thursday, but witnesses and authorities say an argument between the men escalated into Knight ramming the pair.

Knight, who created one of rap's leading labels and launched artists like Dr. Dre, Snoop Dogg, and Tupac Shakur, turned himself in to authorities and was arrested around 3 a.m. PST, said Deputy Trina Schrader of the Los Angeles County Sheriff's Department.

He was held on $2 million bail and could face a murder charge, she said.

A red pickup truck drove into the parking lot of a fast-food restaurant Thursday afternoon in the Los Angeles-area city of Compton, and its driver started arguing with two people there, sheriff's officials said. The argument escalated, and the pickup struck the men around 3 p.m. and then took off, officials said.

"The people we talked to say it looked like it was an intentional act," he said.

A 55-year-old man died at a hospital, and a 51-year-old man was injured, but officials did not immediately know his condition.

Witnesses also spoke of an argument.

"To see the argument happen, it's one thing," said 17-year-old Robert Smith, who was eating in the restaurant. "Seeing the car incident, that was shocking."

Knight's attorney, James Blatt, said the crash was an accident.

"He was in the process of being physically assaulted by two men, and in an effort to escape, he unfortunately hit two (other) individuals," the lawyer said. "He was in his car trying to escape."

The empty truck was found late Thursday night in a West Los Angeles parking lot, Corina said. Knight was seen driving a red pickup truck 20 minutes earlier in a different part of town where a music video was being filmed, the lieutenant said.

"We are confident that once the investigation is completed, he will be totally exonerated," Blatt said.

Knight founded Death Row Records in the 1990s, but he later declared bankruptcy, and the company was auctioned off.

Many of the records Knight released helped immortalize Compton, the city where the crash occurred, in hip-hop folklore as a gritty and violent urban environment, though crime has dipped significantly there since its 1990s peak.

Knight lengthy history of run-ins with the law range from assaults to driving violations.

In November, he pleaded not guilty to a robbery charge filed over an incident in which a celebrity photographer accused him of stealing her camera in Beverly Hills. Because of prior convictions, he could face up to 30 years in prison.

He has felony convictions for armed robbery and assault with a gun. He pleaded no contest in 1995 and was sentenced to five years' probation for assaulting two rap entertainers at a Hollywood recording studio in 1992.

Last August, Knight was shot six times at a Los Angeles nightclub. No arrests have been made.