Civil war at the cineplex: "American Sniper," "Selma" and the battle over American masculinity

America may love Clint Eastwood's gun-toting SEAL, but the true movie hero of the day is Martin Luther King, Jr. 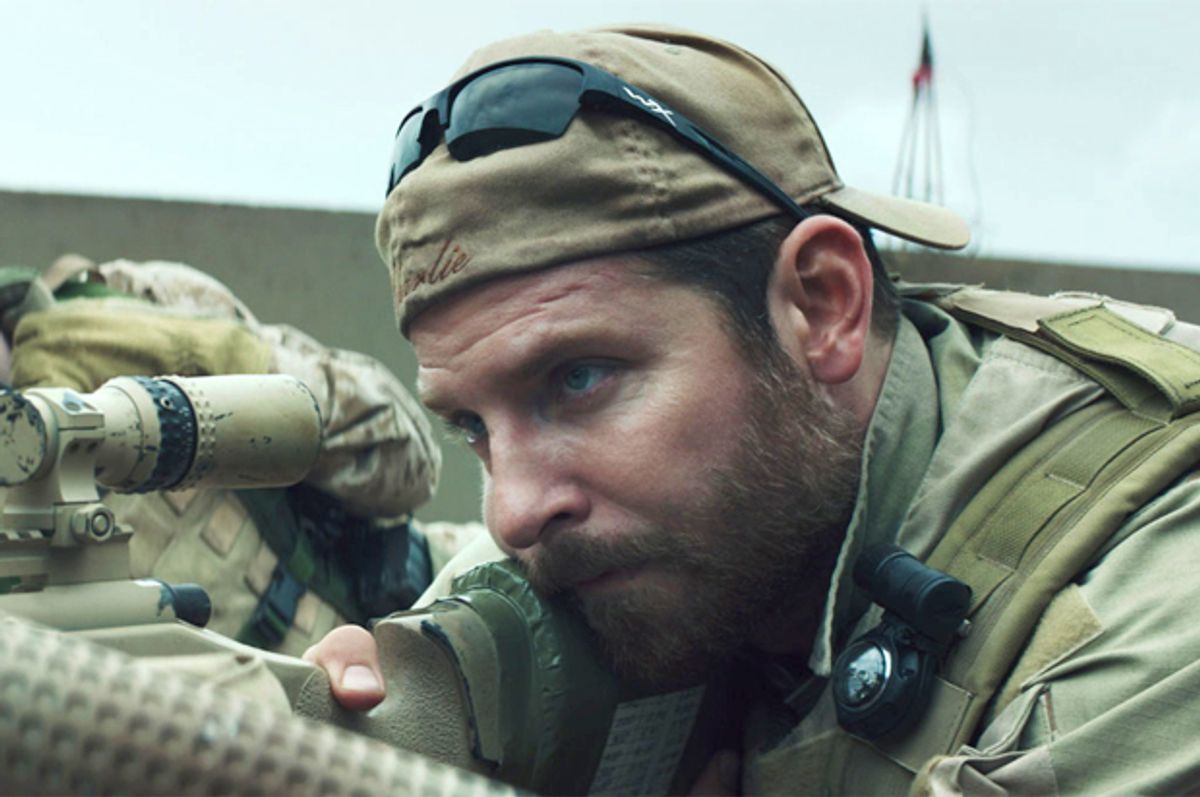 In an essay on Theodore Roosevelt, Gore Vidal classified the former president and known tough guy as an “American sissy.” He was a sissy, because “he never showed much real courage.”

“Despite some trust-busting,” Vidal writes, “he never took on the great ring of corruption that ruled and rules in this republic.” The man whose face forms a fourth of Mt. Rushmore was a particularly American sissy, because he was a “war-lover” and he embodied the belief that physical bravery was the ultimate manly virtue. Vidal, inspecting the idiocy of this belief, concludes, “There is something strangely infantile in this obsession with dice-loaded physical courage when the only courage that matters in political or even real life is moral.”

There is a war in the American cinema right now, and it is not the one that is visible in the boring battle scenes of Clint Eastwood and Bradley Cooper’s jingoistic fairy tale. It is the war for attention and adulation taking place at award ceremonies and ticket booths between American Sniper, and a movie about the sacrifices of heroes who fought for freedom, Selma.

Selma and American Sniper present two different heroes of two dramatically different historical narratives. As they compete at the box office, they mimic the competition between two conflicting conceptions of heroism. There is the heroism of Martin Luther King Jr., who challenged the most powerful forces and institutions of his culture, facing death threats and daily harassment, to work tirelessly toward equality and justice, practice peaceful resistance to oppression, and preach love for your neighbor, stranger and even enemy. Chris Kyle said it was “fun” to kill the “savages” of Iraq, and blindly followed the destructive marching orders of George W. Bush.

As much as these ideas of heroism clash ethically and politically, there is a deeper conflict at work in American culture. It involves America’s inability to advance beyond its BCE notion of masculinity, and progress into an CE world of humanity. Martin Luther King and Chris Kyle not only represent two radically different definitions of heroism, but also two divergent models of manhood. Given the box office success of American Sniper, and the falling feather impact of Selma, it is clear how the majority of Americans view and enforce manhood.

The prevailing and prevalent projection of American manhood is at once a cartoon, simplistic in its emphasis on strength and eschewal of sensitivity, and dangerous in its celebratory zeal for violence. It is not masculine as much as macho, according to the useful distinction of one of America’s finest male novelists, Jim Harrison. Because Harrison often writes about roughneck, working-class characters in the Upper Peninsula of Michigan or the ranches of Montana, many shortsighted critics have called his literature “macho.” Explaining his objection to that label, Harrison said, “I have always thought of the word ‘macho’ in terms of what it means in Mexico—a particularly ugly peacockery, a conspicuous cruelty to women and animals and children, a gratuitous viciousness.”

Idolatry of physical strength and bravery, without an ethical compact or moral purpose, naturally morphs into the glorification of violence, and directly contributes to the maintenance and enhancement of social catastrophes and crises, especially those that involve abuse or neglect of the weak and vulnerable.

The American macho problem of social dysfunction and intellectual paralysis is at work on the football field whenever coaches, fans, parents, and even players enforce a code to take concussions like “real men,” and ignore the possibility of early onset dementia. America’s antiquated notion of macho toughness is operational in the aggressive pursuit of sexual ownership in the military, where one third of women are victims of sexual assault, and on college campuses, where one fourth of women experience sexual harassment.

It is also not far in the background of America’s foreign policy, and its enthusiasm for wars when primitive, locker room calls for “kicking ass” replace meaningful discourse on geopolitics and international affairs. Toby Keith’s anthem about “putting a boot in the ass” of terrorists, like President Bush’s flight suit posturing and “bring it on” finger waving, captured the nation’s attention, demonstrating how at the highest levels of governance and in the most avid articulations of politics, America has not yet graduated out of the Bronze Age nor has it left the professional wrestling ring.

Anyone who attempts to navigate the minefield of the macho mentality will face accusations of failing to live up to some bizarre standard of acting as a “real man.” Steve Almond writes that he is deluged, almost daily, by people telling him, through the tough guy forums of anonymous social media and email, that he is not a “real man” because he is critical of the NFL for its complicity in covering up concussions and their consequences. Antiwar activists and writers often have their “real men” credentials questioned. The recent mockery of John Kerry and James Taylor for a performance of “You’ve Got a Friend” in France reveals that the only acceptable language of international alliance is the terminology of violence. Had Kerry vowed to “destroy” or “eliminate” all Islamic terrorists, he would have won favor in the press. Using song as a gesture of political and personal friendship is worthy only of scorn.

The failure to evolve out of stone age masculinity is especially damning because America prides itself on its status as a “Christian nation,” yet Jesus Christ said “he who lives by the sword dies by the sword” and advocated “turning the other cheek” when facing a tormentor. It was this very idea, along with Gandhi’s application of nonviolent protest to politics, that inspired King to lead the civil rights movement according to principles of peace.

King and Gandhi possessed what Vidal described as “moral courage.” That standard of courage and measurement of bravery is flawlessly helpful in the world or adult reality, but not as appealing in the world of juvenile fantasy.

In American Sniper, one of the most important scenes takes place early in Chris Kyle’s childhood. The boy is sitting at a dinner table with his brother and parents, and his father explains that in the world there are “sheep” (weak people without the capacity for violence), “wolves” (evil people who are violent), and “sheepdogs” (good people who are violent). The earnest father, speaking in an inexplicable tone of anger, tells Chris and his brother that he is raising them to be sheepdogs.

The worldview is deranged in its simplicity. History, ethics and politics are much more complex than the categories of wolves, sheep and sheepdogs will allow. The worldview becomes dangerous when coupled with macho notions of physical strength and infantile ideas of physical courage, because it causes the aspiring sheepdogs to actively look for wolves.

“There is evil here,” an adult Chris Kyle tells a SEAL turned war skeptic in American Sniper when justifying the American invasion and occupation of Iraq. There certainly is evil in Iraq, just as there is evil in America and everywhere else. Sending sheepdogs to pick fights with wolves, as the world has seen in Iraq, will only spread misery, enhance cruelty and create chaos. The medieval macho philosophy, dominant in American life, insists that the eradication of evil is possible with guns, tanks and tough guys. It is naïve at best, but catastrophic when combined with the categorization of human beings in absolutes. Failing to question, much less protest, the state for its advancement of its own interest overseas, with the trajectory of the missile and bullet, reveals America as a nation of sissies in desperate need of “real men” like King to demonstrate authentic moral bravery.

Martin Luther King Jr. did not classify all human beings into the static groups of “evil” and good”—“wolves” and “sheep.” He said that “there is evil in the best of us, and good in the worst of us,” and explained that all it takes for evil to triumph is for “good men to do nothing.” He resisted the simplistic and self-serving supremacist worldview. According to his friend, Harry Belafonte, he did express consternation that he was succeeding in the integration of his people into America, but that he was integrating them into a “burning house.” The regressive relegation of manhood to aggression without compassion acts as kerosene in a culture committed to arson.

It is erroneous to distill the civil rights movement into the struggle of one man. King would have meant nothing without his staff and supporters. Even if he was a genius and a giant, it was the movement that made King. It was not King that made the movement. Similarly, Chris Kyle’s attitudinal aggression toward anything un-American and his fatal, doctrinal loyalty to the interests of Empire fuels the death machinery of militarism, but it does not construct and create it. The war in Iraq was a policy decision of the American government carried out with the enthusiastic endorsement, or at least, tacit approval of the American media.

At the movie theater, however, there exists the dramatization of two distinctly American men, and through an imaginative confrontation with the tragedies and triumphs of their lives, Americans can draw distinctions between two different molds of manhood.

One mold makes room for tenderness, love, and sensitivity to the suffering of others, along with a willingness to admit weakness. It is a 21st-century adaptation to the acquiescence of knowledge and the progression of cultural norms more suitable for sophisticated, and more importantly, peaceful living. The other mold makes room only for arrogance, intimidation and the reckless abandonment of humanistic values in favor of the desire to dominate.

Gore Vidal, a gay veteran of World War II who risked his entire career in an act of moral courage by writing the first gay love story in a novel during the height of homophobia in the 1950s, was part of an American vision of manhood that allowed for complexity of thought and emotion. The cinematic characters of Paul Newman’s best roles—strong but sensitive—provide another example, as does the music of Bruce Springsteen, an all-American man whose most masculine song, “Tougher Than The Rest,” equates strength with loyalty and love.

At some point, American culture lost its balance, and its mind, and reverted back into an action movie, video game conception of masculinity. The consequences, far from fictional or digital, are located in the wreckage of women’s lives darkened by sexual assault, children’s futures destroyed by war, and its macho practitioners’ loss of emotional stability and satisfaction.

Martin Luther King Jr.'’s life demonstrates the sturdiness and softness necessary for healthy masculinity. Acceptance of such a contradiction, and sublimation of two oppositional ideas into one identity, requires comfort with the nuanced variety of psychology and history.

Chris Kyle suffered from post traumatic stress disorder, a condition that caused robotic detachment from his family culminating in nearly killing his son’s pet dog during a child’s birthday party. It is likely that his laconic rejection of regret, remorse, or even reflection on his own role in an unjust war worsened his psychic disorder.

“Do you have any regrets or doubts over anything you did?” a VA psychiatrist asks Chris Kyle in the movie. “No, that’s not me,” he answers back.

It isn’t America either. The trauma will only escalate until an increasingly isolated and violent nation can look itself in the mirror with a willingness to see its disfigurements and deformities. King’s life was lived and lost in service to the truth. He understood that recognition of the truth, even when it is ugly, is elemental to the beauty of a hero and the substance of a man. That is the place King still occupies in every moral American’s conscience.