The secret history of snowstorms: How blizzards shaped the modern American city 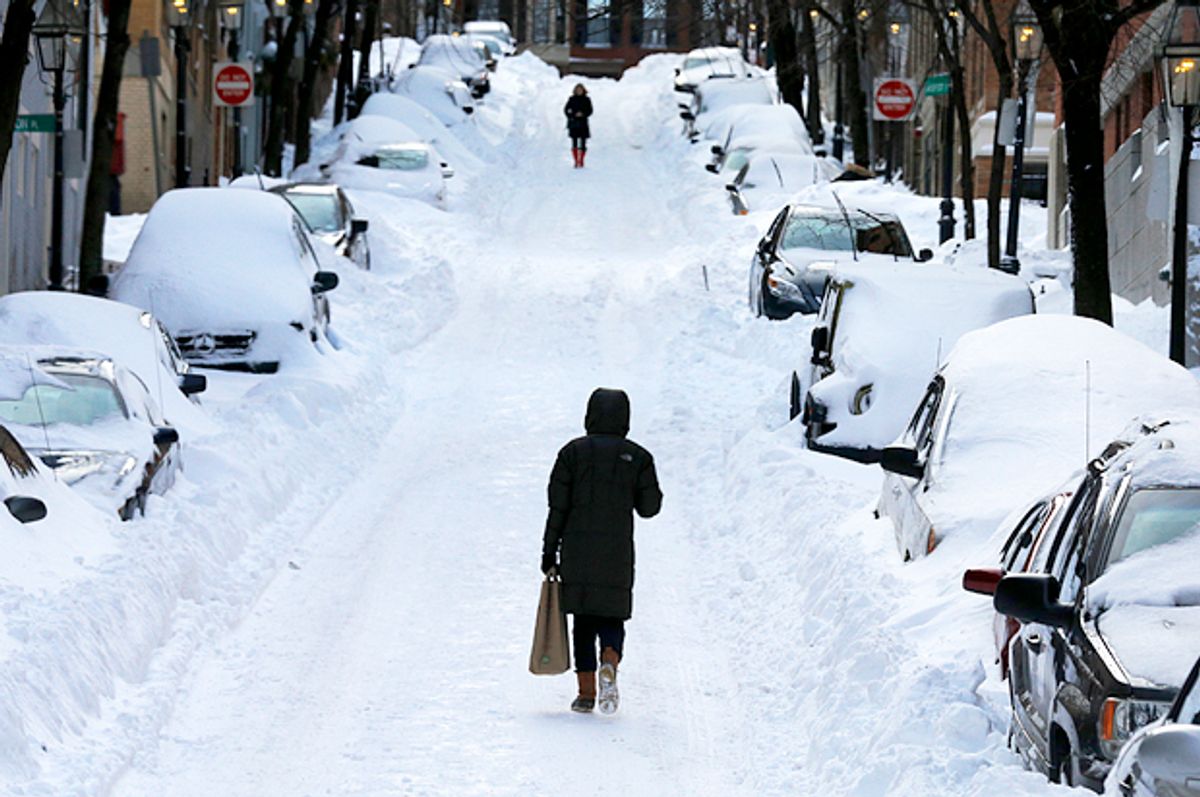 Out of an unseen quarry evermore
Furnished with tile, the fierce artificer
Curves his white bastions with projected roof
Round every windward stake, or tree, or door.
Speeding, the myriad-handed, his wild work
So fanciful, so savage, nought cares he
For number or proportion.

Emerson called this “the frolic architecture of the snow.” The effect is most impressive in the city, where piles and drifts warp the variegated streets into a single, snow-crowned mass at once fantastic and familiar.

Snow gathers around the city, filling its ledges and voids, but it shapes the city, too. Our expectations of both government and infrastructure were forged under snowdrifts; a melting coat reveals more about a city than it obscured in the first place.

The foundational example of a snowy urban reckoning was the Great Blizzard of 1888. Though it didn’t inflict the same catastrophic damage on Boston and New York as did the Great Fire on Chicago in 1871 or the earthquake on San Francisco in 1906, the snowstorm wrought similar moments of civic reassessment. In particular, the long recovery period inspired those cities to move important infrastructure below ground. "The blizzard demonstrated the need for more robust urban infrastructure,” writes Yoni Appelbaum,

Boston and New York, which had contemplated building subways before, now raced to complete them. Cities also constructed new subterranean conduits, carrying electric, telephone and telegraph wires, an investment spurred by the blizzard. "What an argument it furnished for underground transit and underground wires!" exalted the Tribune. Congress soon authorized the Post Office to build networks of pneumatic tubes, shooting the mail around major cities, safely out of reach of the snow.

That storm, Appelbaum posits, augured a permanent shift in the functions of the urban mayor. In the new American city, services like snowplowing (and garbage collection, wastewater disposal and so forth) would be expected of City Hall.

Snow clearing, like any other municipal outlay, found its place in machine politics. Distributing snow tickets to hard-luck neighborhood men was one of the formative political experiences of a young New Haven alderman called Richard Lee, who would go on to rule the Elm City for nearly two decades. “It’s your ward,” party boss John Golden told the future mayor. “These are your people. You pass them out.”

Woe unto the mayor who neglected snow-clearing duties, as New York Mayor John Lindsay did in 1969. The decision nearly cost him his career. Chicago Mayor Michael Bilandic was not so fortunate — his ineffectual response to a 1979 blizzard was fresh in the minds of voters when he lost the primary a month later.

Not every city works this way, as Aaron Renn has shown in an instructive comparison between Chicago and Indianapolis. In the latter city, Renn notes, residents have long put up with little or no snow clearance in exchange for low tax bills. "In Indianapolis, after 12.5 inches blanketed the city this January,” wrote Renn in 2011, "crews took several days to clear its snow routes and, as per its standard operating procedure, did not plow residential streets at all.” And that was just fine. There is, Renn submits, a "powerful difference in citizen expectations between these two cities, reflecting two of the broad approaches to urban service provision in America today.” Neither system, he argued, is sustainable.

On the whole, the resilient political power of snowstorms in Northern cities owes much to urban sprawl and automobile dependence. Without their cars, even urban Americans can’t get to the grocery store, a heated public place, or a doctor’s office, which makes life dependent on snow clearance. In the streetcar era, many cities could be resuscitated by clearing, à la Indianapolis, central arteries alone. Today, until the city plow arrives at your cul-de-sac, you are as snowbound as if no streets had been cleared at all.

Sprawl paves over drainage areas, increasing the incidence of post-storm flooding. Sprawl requires more plowing for fewer people. And sprawl requires an environmentally damaging quantity of salt. Between 1952 and 1998, the sodium level in New York’s Mohawk River more than doubled; the quantity of chloride more than tripled. Chloride levels exceed federal safety guidelines in over 40 percent of streams in the United States, in large part due to road salt used to melt snow and ice on roads and in America’s enormous surplus crop of parking lot.

Modern snowstorms, like their 19th century equivalents, still spur advances in technology (beyond road salt). In Chicago and New York, the political tripwire that was plowing has been slowly relaxed by live maps that show the progress of the cities’ fleets. As ever, conspiracy theories flourish, but the real-time maps demystify the process. GPS devices have since been incorporated into municipal bus networks.

Finally, even as a good snowstorm reveals the extent of automobile dependence, it shows how grossly we have overbuilt roads and parking lots. Tire tracks in the snow constitute the most simple, powerful illustration of how little space automobiles actually use – and how much they are allotted. Next time it snows, watch how much of an intersection remains pristine and white despite the return of traffic. Planners call this phenomenon a “sneckdown,” or snowy neckdown. (A neckdown is an expanded sidewalk at an intersection.)

Narrowing streets and enlarging pedestrian space makes the road safer and the street more pleasant. In fact, city planners have begun using sneckdowns to redesign intersections. In 2011, for example, snowdrifts at a West Philadelphia intersection inspired a brick-and-mortar pedestrian upgrade.

Snow: revealing failures of city planning and management since 1888. But the sneckdown’s charm is both critical and constructive. A snow-dusted intersection shows the evidence of a problem and the possibility of a solution.