Angry Rand Paul is once again blaming the liberal media for highlighting his worst quotes. Sorry, this doesn't fly 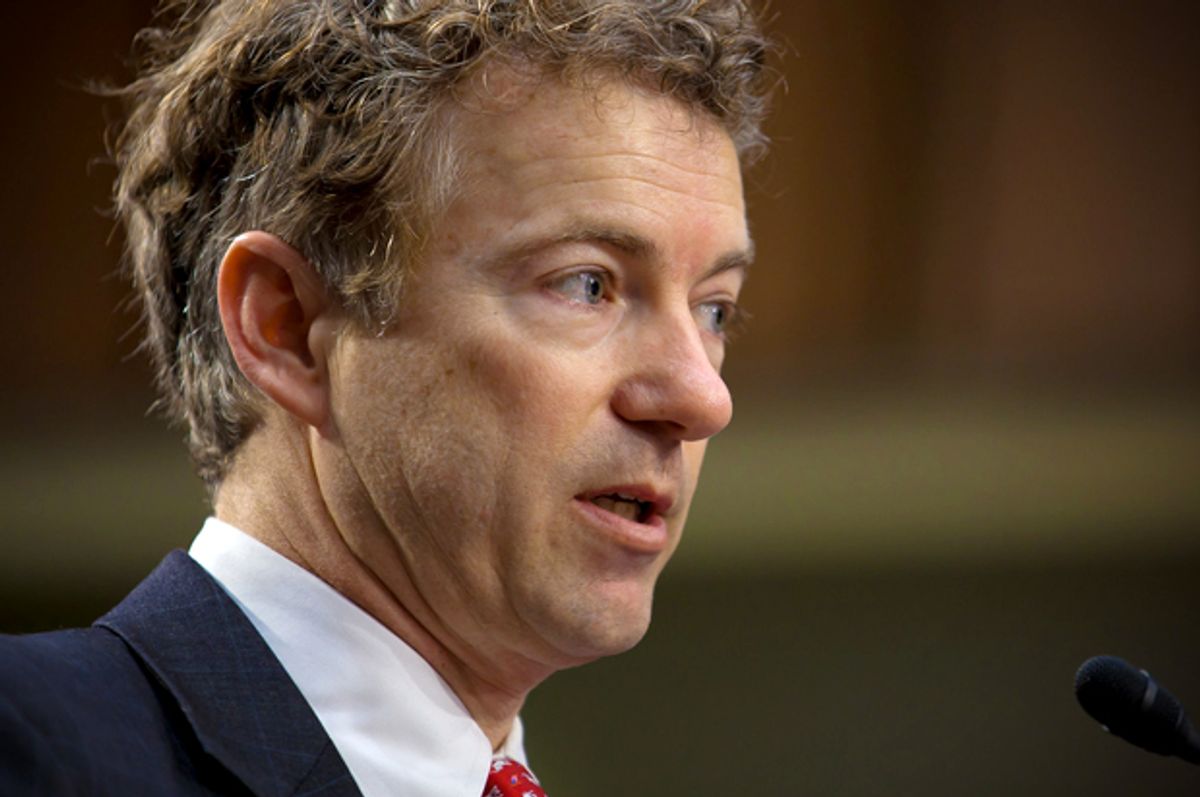 The fight for the 2016 Republican nomination is going to be so fun. ("Fun"). A brief sequence of the past few days: On Sunday everyone watched the Super Bowl and Katy Perry and Missy Elliott and it was great. On Monday morning Chris Christie was playing defense for suggesting vaccinations shouldn't be mandatory, they should be up to the parents. By Monday night Rand Paul was shushing a woman, on television, and by Tuesday afternoon, curtain:

Not quite as much skin as Don Lemon, God bless. This is a pinned tweet on Rand Paul's feed. It follows several other tweets suggesting that Rand Paul loves vaccinations, gets 'em all the time, and anyone who suggests otherwise merely has it out for him. (It's also a total dodge on the question of whether vaccinations should be mandatory.) He's so mad.

Now there are members of the media who merely have it out for him. But they're not in the liberal media. One of the things that sucks about being Rand Paul, relative to the rest of the Republican field, is that neoconservative media -- the Washington Free Beacon, the Weekly Standard, Jennifer Rubin's blog at the Washington Post -- are hellbent on doing whatever they can to discredit his presidential hopes. They don't appreciate his hesitancy towards invading every country on Earth, and so they're more than willing to peddle whatever intra-party opposition research they can on Paul. If it had been, say, Marco Rubio, or one of the other over-the-top war hawk candidates arguing that mandatory vaccinations are the first step towards "martial law," the Washington Free Beacon would have praised the Florida senator for his trenchant insights into political theory.

But it wasn't Marco Rubio who said that. It was Rand Paul. And he said it on the radio show of performance-art conspiracy theorist Alex Jones in 2009. Rand Paul has said a lot of kooky things in his political career, one that draws its strength from his father's fringy base of support. It's understandable that he would get frustrated when people bring up these quotes while he's trying to "pivot" to more of a mainstream commodity. It's frustrating when you've said a lot of crazy nonsense and people mention them!

That's life, though, and he's going to need to learn how to deal with it. Because he still really, really doesn't know how to deal with it, and getting snippy at everyone who asks him a difficult but completely fair question is not the most endearing trait in a potential president. Will he ever learn how to deal with uncomfortable questions without getting huffy and shushing people? That he hasn't learned yet, in his five years in the spotlight, is not a good sign. It's almost like people's personalities don't fundamentally change even when new circumstances make them inconvenient.

The most famous example of Rand Paul getting furious over someone bringing up one of his "uncomfortable" policy positions would still have to be his interview with Rachel Maddow from 2010. Paul held the libertarian belief, one that only the PURE! libertarians still maintain, that Title II of the Civil Rights Act of 1964-- prohibiting businesses ("public accommodations") from discriminating on the grounds of "race, color, religion, or national origin" -- is a violation of business owners' rights. This led to a wave of completely fair stories about how Rand Paul disagreed with the key passage of the most important civil rights legislation of the 20th century. Paul has since said he's fine with the Civil Rights Act of 1964 and gets furious whenever anyone mentions that he used to not be fine with it. But there's no way for him to argue that he was "misrepresented" by the liberal media in any way, as he will try to do. There are quotes. He must live with that. Not saying it's easy! But it's a problem of his own making, and the blind spots in his own ideology.

Another position that Rand Paul made the choice to champion when he came to the Senate was to eliminate the entire foreign aid program. This was a stupid policy position that pandered to the dangerously widespread belief that most foreign spending is devoted to "welfare" for persons abroad. It's sort of silly that he only got in trouble for it because of the other big misperception on foreign aid -- that none of it goes to Israel, when in fact Israel is one of the primary beneficiaries. And so he's since combined the two stupid misperceptions into a "compromise" view that covers his ass but remains a monumentally stupid means of conducting foreign policy: that foreign aid should be cut off to countries where someone burns the American flag. When people ask him about his well-publicized effort in 2011 to cut off all foreign aid, including to Israel, he gets extraordinarily testy and blames the liberal media for making things up. That's not a tenable response.

This ever-recurring trait -- taking a dumb position catering to the fringe, then later denying he ever took that position, and then getting angry and blaming everything on the unfair media -- is going to destroy Rand Paul early on if he doesn't change tracks. That's a shame. Rand Paul would bring a lot to the Republican debate on use of the military, criminal justice reform, the Drug War, and police militarization. He's not going to get anywhere, though, if he insists that he never said certain things or held certain positions that he knows full well he said and held. There's no easy answer for him, and that's the price you pay when you make the choice to say stupid things. But instead of getting angry at anyone who mentions these things, his best hope is just to explain why he's changed his thinking, if indeed he has.