Eddie Redmayne is more fun here than as Hawking, but that's not enough to save the Wachowskis' space opera (UPDATE) 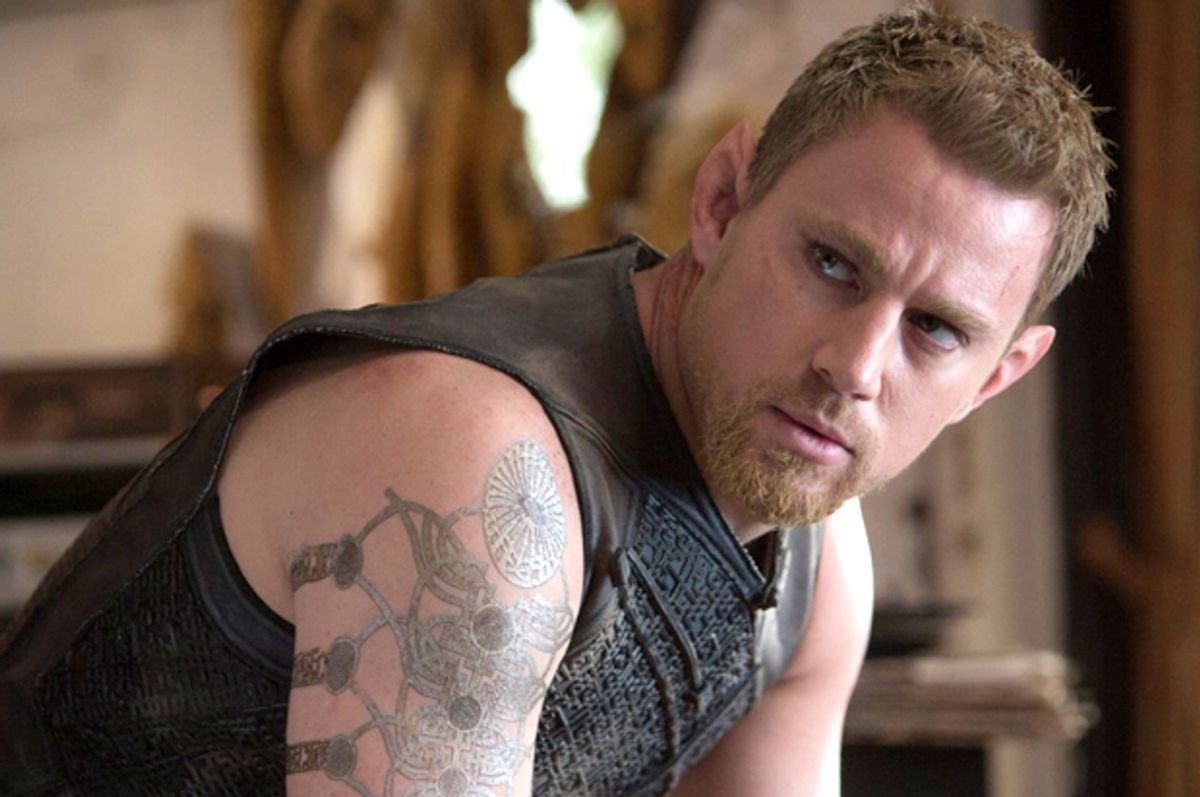 It’s easy to make fun of Andy and Lana Wachowski’s long-gestating, universe-spanning science-fiction epic “Jupiter Ascending.” So easy, in fact, as to be irresistible. We may as well indulge that for a minute before trying to figure out what happened here. This movie often plays like a super-expensive, 21st-century version of one of those “Star Wars” knockoffs made around 1980 by people who weren’t George Lucas. It has Channing Tatum in Spock ears and a cute little goatee, zooming around on Atomic Anti-Gravity Rollerblades. It has Mila Kunis as an orphaned immigrant scrubbing toilets in Chicago, who is actually the queen of the universe but doesn’t know it yet. It has the kind of jumbled, pseudo-spectacular, overdecorated digital design that the eye and mind can’t really take in. Individual shots can be gorgeous, but there are just too damn many of them, and the overall experience is the visual equivalent of eating an entire wedding cake.

OK, I think it’s more accurate to say that Jupiter Jones, Kunis’ character, is just queen of our chunk of the universe, not the whole thing. Maybe there’s an online guide somewhere that explains what the hell is going on in “Jupiter Ascending” – or maybe there would be if anyone cared, which honestly makes me sad. At any rate, Jupiter gets dragged into some kind of cosmic royal-family turf war and/or hambone acting competition between Eddie Redmayne and Tuppence Middleton, playing a pair of decadent, semi-immortal beings whose attitude toward you and me is not benevolent. She also has power over bees, which is pretty awesome. The plot of “Jupiter Ascending” consists almost entirely of Jupiter getting enticed or coerced into really bad decisions – like an Alexander McQueen-style wedding with another godlike entity named Titus (Douglas Booth), a fellow so vain and pretty and metrosexual he makes David Beckham circa 2002 look like a fishing buddy of Hemingway – and then getting rescued by intergalactic pointy-eared bad boy Tatum and his atomic boots.

Seriously, the Wachowskis’ progressive credentials take a pretty hard hit here, which is certainly not the only sense in which “Jupiter Ascending” feels like a backward journey but is still kind of depressing. I get that this movie is supposed to recall classic fairytales (the one about Cinderella in particular) and old-fashioned comic books and space-opera serials of the ‘40s and ‘50s, all at the same time. But Jupiter is a radically retrograde character even by those standards, and Kunis – at her best a fiery screen performer with a streak of sexy and a streak of tomboy – never seems comfortable as a doe-eyed innocent who is the focus of everyone’s attention. Jupiter has less female agency than any character ever played by Doris Day. Compared to this movie, the Disneyfied feminism of “Frozen” and “Brave” and “Maleficent” feels like Valerie Solanas’ “SCUM Manifesto.”

I’m not really having any fun hurling these barbs, though. I come pretty close to being a Wachowski loyalist, and I’m itching to defend “Jupiter Ascending” despite the fact that it’s basically terrible. Maybe if I take it home and feed it warm milk from a bottle, it will get better! I am a person who really liked “Cloud Atlas”! I did not personally much enjoy “Speed Racer,” a film that inflicted measurable brain damage on its audience, but I will nod along while other people defend it. I am pretty nearly the world’s biggest fan of “The Matrix Reloaded,” and according to me “The Matrix Revolutions” never happened at all. Andy and Lana do not need my protection or my sympathy, of course. They created a globe-shifting, culture-jamming metaphor that was also one of the greatest genre movies of all time, and that’s more than enough. How they got from there to here is somewhat mysterious – but then, a lot of Wordsworth’s later poetry is pretty cantankerous and awful, and that does nothing to devalue “Tintern Abbey.”

There are some dazzling action sequences in “Jupiter Ascending,” but nothing you haven’t seen in a dozen other films within the last year. The elaborate action choreography the Wachowskis pioneered and perfected almost a generation ago has so thoroughly permeated Hollywood cinema that we’ve reached saturation point. I would say the same thing about the crazy architectural mélange of Gothic and neoclassical and futuristic and Victorian and WTF design backdrops, all of it conspicuously unreal, as the action leaps from planet to planet, palace to palace. It’s like an everything-must-go garage sale of European history, held on the moon. We could be in “Guardians of the Galaxy” or “Man of Steel” or the "Thor" franchise or damn near anything else in the Hollywood picture book of sameness. Certainly the Wachowskis helped create this aesthetic, along with Christopher Nolan – but so far he’s done a better job wriggling free from it. (“Interstellar” was a mixed bag, but it’s nothing like his Batman movies.)

There are some memorable scenes in “Jupiter Ascending,” including Tuppence Middleton bathing in a glowing hot tub full of youth-restoring goo whose origins resemble those of Soylent Green. There are moments when the goofy pulp romance between Jupiter and Tatum’s character, a Han Solo-type renegade named Caine, feels poised to take off. (Tatum, as always, is a source of unflappable good cheer, even with those ears.) Redmayne, as the most evil of all the evil demigods, delivers his lines in a drawling stage whisper, redolent with many millennia of upper-class depravity and the very best sherry. He’s about 200 times more enjoyable here than playing Stephen Hawking in “The Theory of Everything,” which makes the second bad movie this week in which a likely 2014 Oscar-winner outdoes his or her prestige performance. (See also: Moore, Julianne; “Seventh Son” vs. “Still Alice.”)

Core Wachowski themes of class warfare and the predatory, pyramidal nature of capitalism are dimly ascertainable here: Redmayne, Middleton and Booth essentially play members of the top one-trillionth of 1 percent, those who feast on our bones when they’re not too thoroughly bored by the nature of existence to bother. If you squint and make air quotes, you can make yourself believe that the spiritual or philosophical syntax behind “The Matrix” is also present, that being the idea that the visible surface of reality conceals the true nature of power relations. But even by my standards, I’m stretching. There’s really no getting around the fact that this is a movie in which Channing Tatum has magic sneakers and fights lizard-men, but that fundamentally is not trying to be funny.

There’s a standard theory in Wachowski-ology that views the sibling duo, for better or worse, as something close to pure artists, sealed off from critical opinion or commercial considerations, who make exactly the movies they want to make and don’t care what anyone thinks. There’s an appealing romance to that conception, and it helps account for what went wrong (and right) with “Cloud Atlas.” But “Jupiter Ascending” does not support that theory. It has big stars and elaborate special effects, and feels like a failed effort to channel the specific quality of Wachowski craziness back toward the pleasure matrix of the mass audience. It’s a botched, truncated and possibly unfinished film that began with big dreams and got dragged down by leaden commercial reality -- a trilogy’s worth of space opera crammed into one movie and then abandoned on a frozen February weekend to be squashed by SpongeBob. Don’t let anybody tell you it’s one of the worst movies of the year or whatever, because that won’t remotely be true. But even the flashes of possibility in “Jupiter Ascending,” the myriad moments when it almost connects with its Platonic higher self, only heighten the sense of regret.