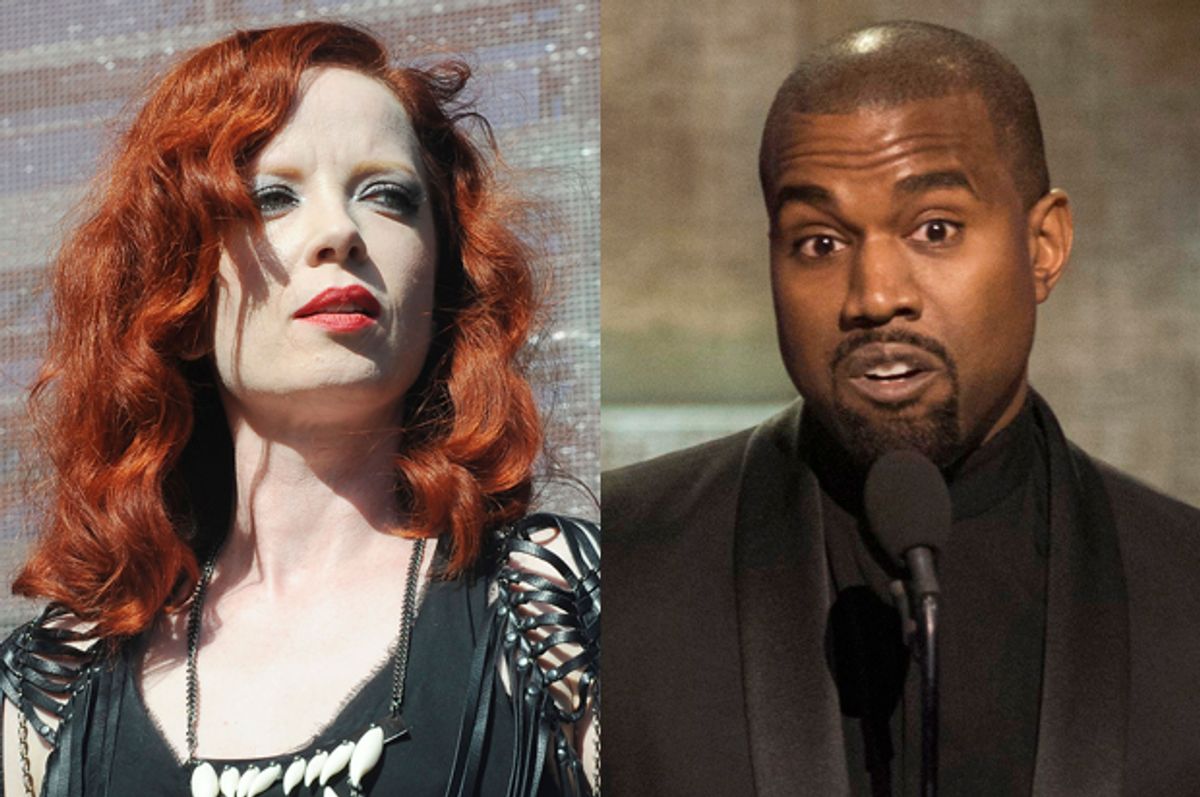 There is no further commentary on the latest Kayne West tantrum necessary. Shirley Manson, you said it all.

When West leapt to the stage Sunday night after Beck's "Morning Phase" beat Beyonce for Grammy's album of the year award – and then quickly turned around and returned to his seat -- it looked for a moment like the multi-hyphenate, Mr. Kim Kardashian was just poking fun at his notorious 2009 bum rushing of a victorious Taylor Swift at the VMAs. But then, of course, because this is Kanye, he had to take it up a notch. Speaking with E! after the awards, he ranted that "Beck needs to respect artistry and he should've given his award to Beyonce." And he expressed his distaste for the Grammys by saying, "When you keep on diminishing art and not respecting the craft and smacking people in their face after they deliver monumental feats of music, you're disrespectful to inspiration. And we as musicians have to inspire people who go to work every day, and they listen to that Beyonce album and they feel like it takes them to another place." Oh that Kanye!

What followed was a mostly unnecessary public debate over who really "deserved" to win, and some ugly Twitter spats -- with Epic Records president Sylvia Rhone encouraging West to just "take it from him." Beck himself politely asserted that he "absolutely" thought Beyonce was going to win, and took West's comments with a gracious, "I still love him and think he's genius. I aspire to do what he does." West's wife Kim Kardashian, meanwhile, stuck to a nervous, uncomfortable smile.

Kanye West has been a superstar long enough that most of us understand now that he's basically the really famous version of everybody's really smart, often highly entertaining, totally annoying, pain in the butt friend. His douchebag jar overfloweth. But what has been largely missing so far from the whole Kayne vs. Beck conversation has been someone to call West out on his apparent need to take umbrage on Beyonce's behalf. That, however, was taken care of Monday, when Garbage front woman posted an open letter on Facebook. "It is YOU who is so busy disrespecting artistry," she wrote, adding, "You disrespect your own remarkable talents and more importantly you disrespect the talent, hard work and tenacity of all artists when you go so rudely and savagely after such an accomplished and humble artist like BECK. You make yourself look small and petty and spoilt. In attempting to reduce the importance of one great talent over another, you make a mockery of all musicians and music from every genre, including your own. Grow up and stop throwing your toys around. You are making yourself look like a complete twat." But where she really nailed it was in her PS, when she observed, "I am pretty certain Beyonce doesn't need you fighting any battles on her account. Seems like she's got everything covered perfectly well on her own."

If Kanye wants to be, as Manson puts it, petty and spoilt about his own creative recognition, that's one thing. But his continued need to white knight on behalf of one of the most powerful, successful women in the music industry is another. Beyonce is doing just fine, thanks. She doesn't need Kanye to keep pitching a fit every time someone hands a prize to someone else, like he's a frustrated cast member on "Dance Moms." And his continued petulance isn't an insult to Beck, it's a slap to his buddy Beyonce.