My kids will not have the college dream 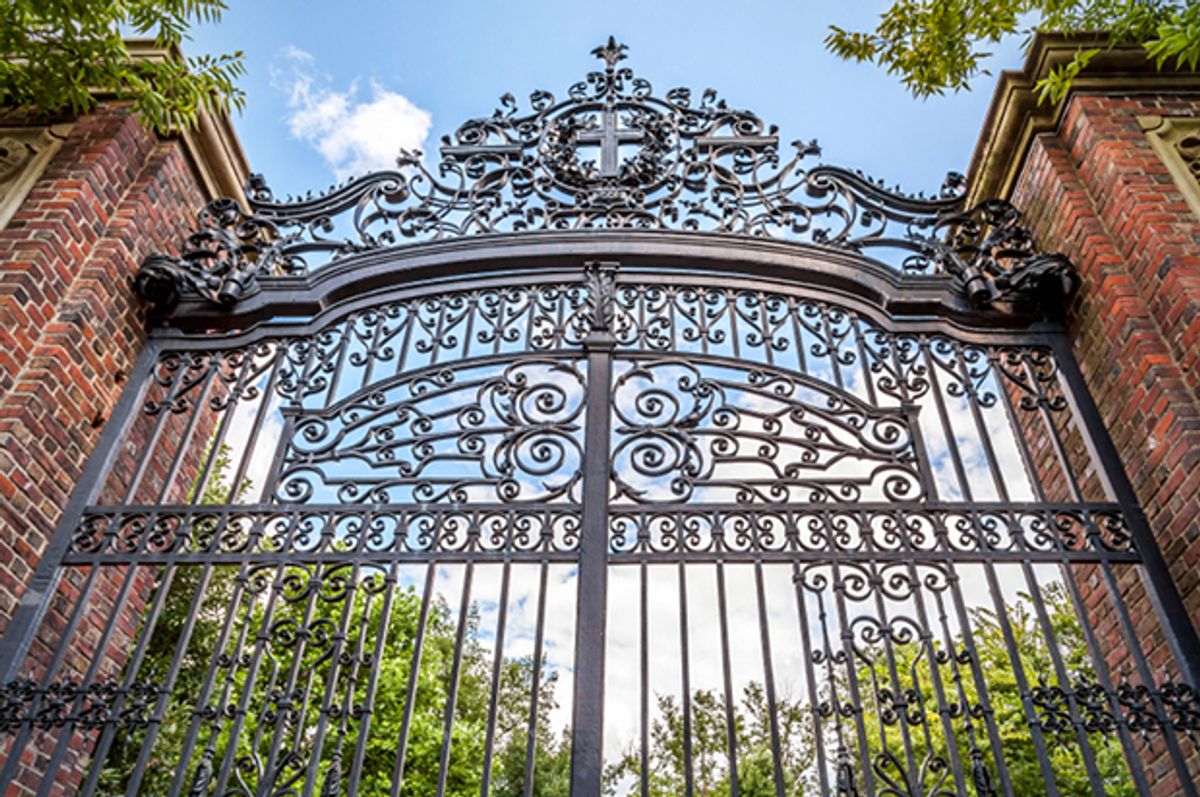 Shortly after my older daughter was born, her father and I opened up a college savings fund for our family. Every month since, we have had money automatically deducted from our bank accounts into it. My firstborn is now three years from being a senior in high school. And if you want to know what fifteen years of steady savings will get you, it's this: It's having a lot of conversations with your kid about lowering her expectations.

Like many parents, I entertain dreams of dropping my daughters off in front of ivy-covered halls, of their faraway adventures in academia. I imagine them launching the next great form of human communication, or maybe just the next great band, in their dorm rooms. I picture a diploma with an impressive, door-opening name on it. There's almost no chance that's going to happen. And I sometimes feel very alone in that assessment.

Just last week, the New York Times ran a feature called "Is Your First Grader College Ready?" Hahahaha, my high school freshman isn't college ready, deal with it! Quoted in the story is a 6 year-old who plans to attend North Carolina State and describes college as "someplace where you go to get your career," and a teacher who says, "Even if I am teaching preschool, the word 'college' has to be in there." Colleges are now leading tours for middle and elementary school- aged children.

As the Times story does astutely note, the push for college preparedness has the possibility of benefiting those who truly need higher education most. "Since 1970, the rate at which affluent students earn bachelor’s degrees has nearly doubled (from 40 percent to 77 percent)," it reports, "while it has barely moved (from 6 percent to 9 percent) for low-income students." That families and teachers are pushing to change the odds for less advantaged families, instilling in even young children the idea that college is something to aspire to, is an admirable goal and one that has real potential to narrow the income gap. Where it gets mucked up is among more prosperous families, who are increasingly sold on the notion that it's Harvard or bust. And as Joan Almon, a founder of the Alliance for Childhood warns, "We are putting so much pressure around college that by the time they get there they are already burned out." Why are six year-olds talking about their careers?

Mine is a financially average family. We have no impressive social or familial connections, and my kids are not prodigies. When my older daughter began babysitting last fall, it was with the understanding that most of the money she earned would go towards her college expenses. As she continues to work through her high school years, she knows that will be the case. Yet all the money we have saved for college would not pay for four years of one daughter's tuition, let alone room, board, and living expenses, at any big name university. And while I want my kids to get a higher education, I don't want them to ruin their – and our – lives over it. Nearly seventy percent of recent bachelor's degree recipients have debt -- an average of $28,400 worth of it. As Thomas Frank wrote in Salon last fall, we are living in the age of "academic capitalism," an era in which a big name college degree is supposedly a ticket to a more prosperous life – a concept that mostly benefits the industry itself. I think that deserves to be challenged.

Maybe I'll feel differently when my kids are older and college becomes more real to us, but right now, I don't feel ashamed or embarrassed about the thought of them starting out in community college and finishing up somewhere else. I don't feel bad about the fact that they will all but certainly have to live at home while they continue their education. My older daughter has already said she fully expects to intersperse her college years with periods of full time work. I am fortunate to live in a state with financially reasonable educational options, even if they don't offer impressive pedigrees or superstar faculty, and am prepared to dig for financial aid opportunities. And maybe if I'd come from an environment in which everybody was just expected to go off for some four year educational rumspringa, I'd be more hung up about it, but I didn't so I'm not.

Instead, neither my mother nor her five siblings went to college. It was a big deal that I did – ever moreso that I went away. And I did for the most part, thanks to hard work from my family and me, to financial aid and loans, have a memorable, positive, traditional university experience. But I always understood that college was something to be worked for, to be paid for.

I think this idea that you have to spend a fortune to get a degree and then go out in the world and make money so you can call yourself a success is pretty badly messed up. So here's what I want for my children, more than I could ever want them to have some cinematic university experience. I want them to look back and not feel they spent the first eighteen years of their lives working toward a single goal. I want them to experience and enjoy where they are in their lives right now. I want them to go ahead and learn things even if they can't directly correlate those things to their projected future income. I want them to be curious, engaged, nice, happy people whose presence in the world makes it better. I want them to do things that fulfill them. I want them to spend their twenties and beyond as something other than indentured servants to the student loan system, so that they can have the freedom to become the people they want to be, instead of the corporate cogs who had to choose between the job with the most pay and being broke. I want them to understand that college is a point in life, not an endpoint in it. And they won't need a designer diploma to have any of those things.