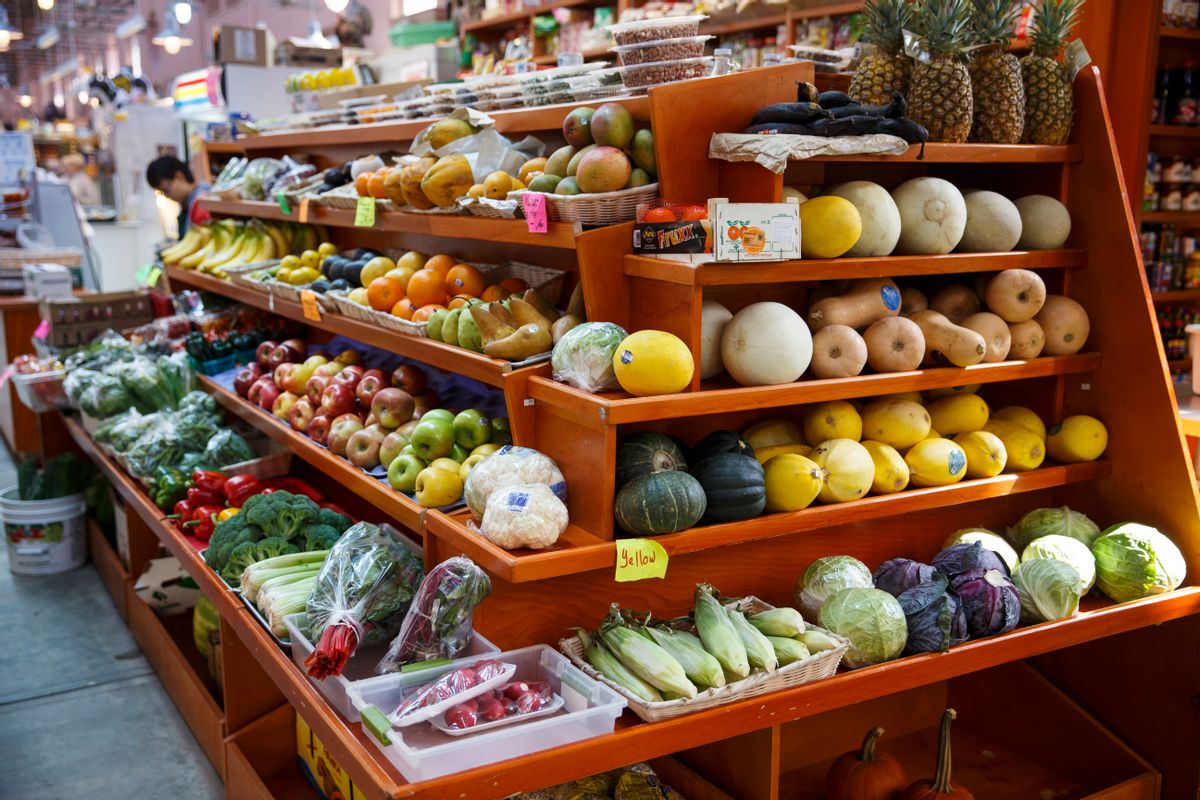 FILE - In this April 24, 2014 file photo, a variety of healthy fruits and vegetables are displayed for sale at a market in Washington. Drink less sugary soda, but an extra cup of coffee or two is OK. So are eggs. And as always, dont forget your vegetables. A government advisory committee is recommending the first real limits on added sugars, but backs off stricter ones for salt and cholesterol intake. It calls for an environmentally friendly diet lower in red and processed meats. (AP/J. Scott Applewhite)
--

A new report from the Dietary Guidelines Advisory Committee, the top panel of nutritionists in the country, has found that the American diet-- filled with way too much salt, sugar and saturated fat --is taking a serious toll on our health, causing around two-thirds of adults to be overweight or obese, while half of adults have chronic diseases related to poor diets and lack of exercise.

The committee, which meets every five years, has submitted the report to Health and Human Services Secretary Sylvia Burwell and the Agricultural Secretary Tom Vilsack, and their findings will contribute to the 2015 edition of the Dietary Guidelines for Americans, which are then, in turn, used to design cafeteria meals for millions of children, as well as food assistance programs including WIC.

"The major findings regarding sustainable diets were that a diet higher in plant-based foods, such as vegetables, fruits, whole grains, legumes, nuts, and seeds, and lower in calories and animal-based foods is more health promoting and is associated with less environmental impact than is the current U.S. diet," reads the report.

For the first time, the committee is recommending that the government should consider the environment when telling Americans what they should eat, a move that could have a significant impact on the amount of meat people eat...

The panel also reversed decades of warnings about dietary cholesterol, as The Post previously reported. For years, the Dietary Guidelines have advised Americans to consume no more than 300 milligrams of cholesterol a day, a warning that limited egg consumption for may Americans. The limit arose from the belief that eating cholesterol would lead to high levels of "bad" cholesterol in the blood. But, the group concluded, no such warning is necessary.

The report also acknowledged that moderate coffee consumption is not associated with health risks.

The inclusion of the clause linking meat with the environment is particularly significant. The livestock industry produces the same amount of greenhouse gas emissions as the transportation sector, and cutting meat out of our diets is one major way to decrease our carbon footprint.

"Previous advisory panels have noted the value of vegetarian diets, but these recommendations have been expanded to specifically demonstrate how a vegetarian diet reduces the risk of many types of chronic disease," said the Physicians Committee for Responsible Medicine in a statement. "The current language recommending vegetarian dietary patterns is the strongest to date."