"Birdman" vs. "Boyhood": The Oscars race to save Hollywood's soul

The Oscars are a trade show for a struggling industry, and these two indie films are its shot at redemption 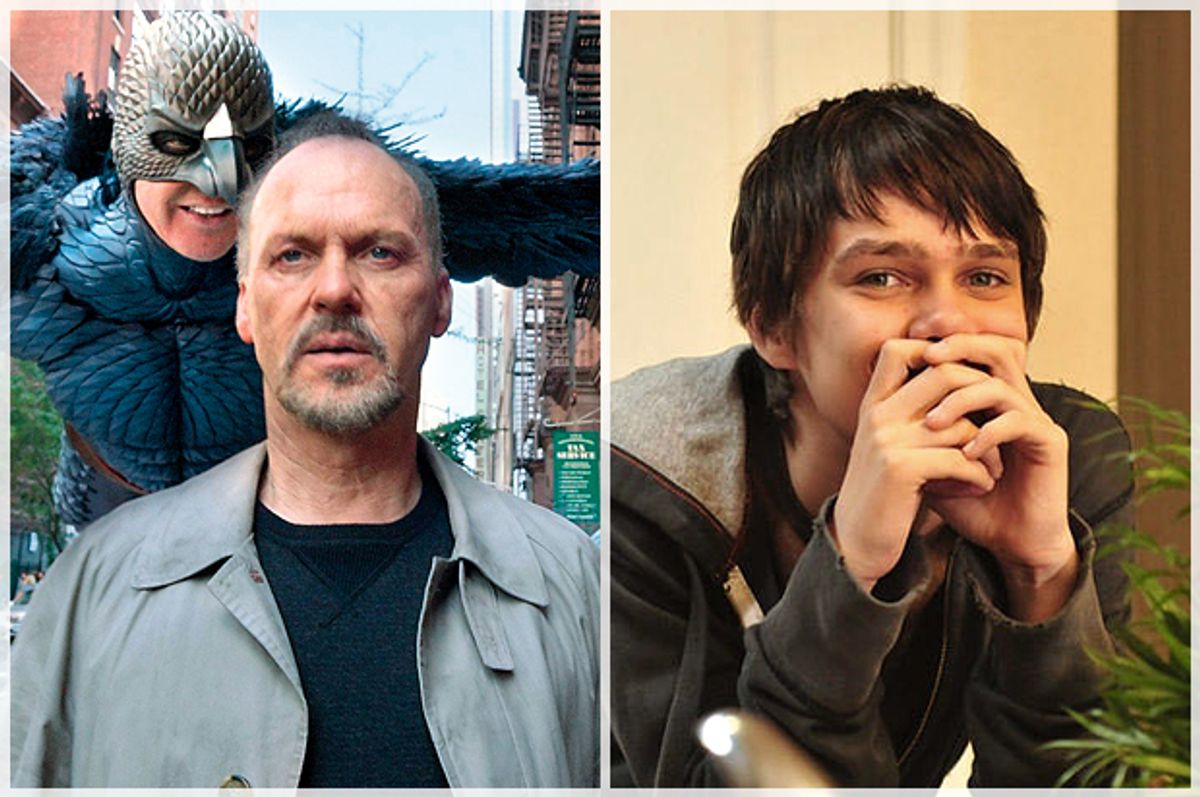 I often say what everyone else says about the Oscars: It’s a trade show designed to make the American film industry look good – both good as in glamorous, and good as in good for the world – and everything that happens on Sunday night must be considered in that light. But when we consider this year’s non-momentous dead heat between “Birdman” and “Boyhood,” I think we have to push beyond such facile and superior pronouncements. Sure, both films have their partisans; as a longtime fan of Richard Linklater’s work and a longtime super-ambivalent watcher of Alejandro González Iñárritu’s, my own preference is clear. But viewed through the long lens they look pretty similar: Both are formally and thematically ambitious prestige productions made on a low budget, and both are indie films with limited audience potential. It’s hard to construct this as a history-shaping decision. It’s more worthwhile, perhaps, to ponder the question of how we wound up with this decision in the first place.

To get ahead of myself a little: No, there really are no other movies in contention for the best-picture prize at this point. Not even “American Sniper,” which has unquestionably made a case for itself as the most culturally influential American film of 2014, has generated news headlines and social-media chatter for weeks, and whose worldwide box-office take will dwarf the combined revenue of “Boyhood” and “Birdman” many times over. Yes, that’s strange, and we’ll get to that. Anyway, the trade-show formulation is accurate but not adequate; it requires a broader anthropological reading, you might say. The Oscars are a trade show for an industry that is visibly struggling, with itself and with the world. It’s an industry struggling to remain relevant, in the face of cultural changes it does not comprehend. It’s an industry not entirely at ease with the terms of its continued success, an industry searching a lost sense of purpose. Beneath the narcissism and empty fabulousness lies a desperate quest for redemption.

Movies remain big business, and enormously influential cultural forces, not to mention one of America’s most successful export products in a globalized economy. But Hollywood’s significance is nowhere near what it used to be, and its central role in what you might call the symbolic economy of the world is long gone. American movies once seemed like the collective dreams of the 20th century, larger than life but almost attainable, fueled by potent myths about individualism and freedom and masculinity that were more powerful than politics or ideology and swept away all resistance. Stalin loved American cowboy movies, and was anguished that the boy-meets-tractor films inflicted on the Soviet public never had the same stupid, pure conviction or life force. Jean-Luc Godard’s entire career as a cinematic revolutionary can be summed up as an attempt to inoculate himself against his deep passion for American movies, and to outlive their cultural hegemony. He may have succeeded – his 3-D film “Goodbye to Language,” which will not be honored in any fashion by the Oscars, was one of 2014’s extraordinary cinematic accomplishments -- but not in the way he once expected.

All those myths that lay behind the grandiosity and the greatness of American movies now appear compromised, undermined, shot full of holes. Hollywood’s most profitable products – the “Transformers” series, the “Fast Furious” franchise, the ever-metastasizing Marvel Comics universe – represent noise and bluster rather than any clear sense of cultural mission or vision. They’re cynical special-effects spectacles whose only conscious ideology is that of bigness, loudness and hotness, calibrated for a post-pubescent male audience that spans the globe. (I would argue, and have argued, that all sorts of semi-conscious ideological coding comes along with that cynicism and that calculation, but we’ll set that aside for now.)

Even as those movies pay for second and third homes, graduation-present Audis and family vacations in Vail and St. Maarten, people in the film industry view them with a mixture of dismay and contempt, which spills over into a peculiar mistrust of massively popular films per se. If we brought down an intelligent life form from Titan and explained the alleged premise behind the Oscars, he/she/it might well wonder why superior examples of the genre “Guardians of the Galaxy” or Joss Whedon’s “The Avengers” or Christopher Nolan’s “Dark Knight” series don’t win these awards. I mean, yes, I’m being intentionally dense and no, those aren’t my favorite movies either. But they represent what people actually want to watch, executed with wit, craft and vision. So it’s objectively kind of mysterious.

What I’m getting at is a fact so obvious it doesn’t get noticed: People in Hollywood who make boatloads of money and live in beautiful houses and eat at terrific restaurants and either have Brad Pitt’s cell number or know they can get it if they need it feel unhappy and ashamed about how they make their living. Actually, although I believe that’s true, it would be more accurate to frame the Oscar equation differently, since most of the tiny and inbred academy electorate comprises longtime industry professionals at lower niches of the Hollywood ecosystem. (They have nice Beverly Hills houses but not the ginormous remodeled ones; they go to well-known restaurants but not the hottest and trendiest; they stay in the lodge at Vail rather than renting a chalet.) The people who work for those Brad Pitt-connected people, people who make movies come into being in a myriad of less conspicuous ways, partake of that shame and unhappiness. They wish their business were better than it is, which is an entirely laudable and almost universal human impulse. (I have been a journalist for more than 25 years. I can relate.)

Everything that seems bizarre about the Oscars, which have become entirely disconnected from popular taste and only faintly and intermittently connected to critical consensus, begins to make more sense when viewed in this light. Regular moviegoers want escapist fantasy on Friday night, which is not exactly breaking news. Critics are almost by definition specialists with eccentric tastes, ornery temperaments and some degree of constitutional masochism. They value formal ambition, complex characterization, social and political agenda-setting and film-school self-referentiality. Oscar voters, on the other hand, respond to films that connect what they do to some larger world of purpose and meaning. It’s not just that they want the American movie industry to look good. They want it to look essential, and they don’t know how to accomplish that.

Here’s another obvious fact, but one noticed by everyone: If “Birdman” wins best picture on Sunday – and that’s where the smart money is coming down – that would be, to quote the inestimable Mark Harris in Grantland, “the third time in four years that people who make movies have given top honors to a movie about people who make movies.” (In case you’ve forgotten, and if there is any mercy in heaven you probably have, the earlier examples are “The Artist” and “Argo.”) Self-regarding movies about the greatness and craziness and triumph and tragedy of those who make movies have become the new Oscar norm, replacing the suddenly outdated Oscar norm of comic-sentimental British costume drama draped over anodyne messages. The producers of “The Theory of Everything” and “The Imitation Game,” a pair of pictures conspicuously molded to that old Oscar-bait template, evidently hadn’t gotten the memo.

You could certainly read social, cultural and psychological meaning into the close race between “Birdman” and “Boyhood.” I would agree, for instance, that the quasi-documentary naturalism and unprecedented production process of Linklater’s film represents a connection to lived American experience (quite likely a disadvantage when it comes to Oscar voters), while beneath the dazzling technique and the tremendous cast of “Birdman” lies a narcissistic showbiz fantasy. But I can’t get super exercised about “Birdman’s” likely victory, honestly. As Harris has noted, it speaks to a widely shared experience in Hollywood, the attempt to create something beautiful and meaningful that runs off the rails into the swamp. It’s “a movie about someone who hopes to create something as good as ‘Boyhood,’” a reading both barbed and generous, and right on the money.

“Birdman” pursues the film industry’s quest for artistic renewal and redemption in the most literal-minded and thematic sense. Viewed through this prism, “Boyhood” represents that quest in allegorical or symbolic form, much as “12 Years a Slave” did last year. In the 2014 Oscar race, which now feels like eons ago in pop-culture time, many industry observers suspected right up to the last minute that “Gravity” would snatch the big prize. I mean, that made sense, right? It was a big box-office hit with two beloved movie stars, a well-respected director and a happy ending; beyond that, it was a zillion-dollar production whose combination of artistry and craftsmanship seemed to justify the industry’s increasing reliance on digital technology. That movie was the proverbial devil’s candy – rave reviews and big bucks -- and they went and gave the best-picture award to a confrontational and overtly topical movie about slavery.

“Gravity” was too close to being the kind of movie that gnaws on Hollywood’s collective conscience in the middle of the night. You can argue all you like that “Gravity” bore almost no resemblance to whichever Michael Bay and Marvel Comics blockbusters dominated the summer of 2013, but that’s not altogether true and misses the larger point. It offered no escape from making those kinds of movies; it did not promise to rescue the stricken titan of the film industry from its slow sink into the cultural mire or its chains of commercial destiny. Of course, it’s not like giving a pile of Oscars to “12 Years a Slave” – or “The Hurt Locker” or “The Artist” or “Slumdog Millionaire” or any other supposedly unconventional recent selection – was going to provide that kind of redemption either. Those choices, like this year’s mildly intriguing contest between two films most people will never see, lend a certain nobility and pathos to Oscar’s battle with irrelevance. As in any good war movie, we know how the battle will end far in advance.