Why it's so hard to punish drivers who kill pedestrians

The vast majority of traffic fatalities never lead to an arrest. But why? 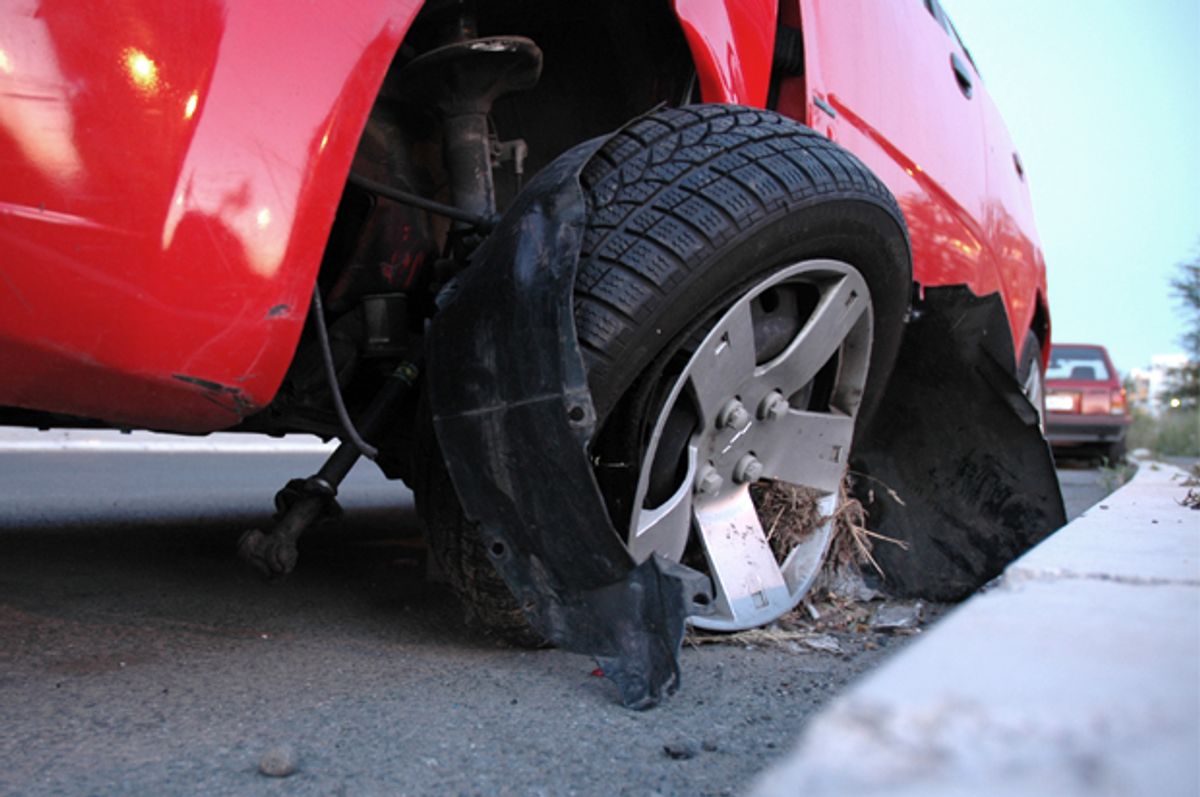 What makes it hard to walk in your city?

Is it the quality of sidewalks, buckled by tree roots and submerged in puddles, appearing and vanishing like a disused deer trail? The foreboding urban-renewal landscapes? How about the zoning requirements that set storefronts behind tremendous fields of permanently vacant parking spaces, or ban shops and cafes from residential areas? Is crossing the street a prohibitive inconvenience, a near-death experience? Or is it simply illegal?

Such is the legacy of a century of planning for automobiles. Enshrined in laws and codes, American urban design has made driving easy. As a consequence, it made walking hard.

But design is only half the problem. Less obvious, but no less consequential, was the legal shift through which society absorbed and dismissed the hazards of urban driving, exonerating individual drivers for crashes, even when they killed pedestrians. (In New York City, for example, 95 percent of traffic fatalities do not lead to arrests.)

This was not a quiet procedure. The early years of the automobile saw riots and vigilante justice over car crashes in major cities. There were proposals to outfit the “devil wagons” with mechanical speed limits. Woodrow Wilson once famously predicted that cars, realizing the violence of economic inequality, would bolster the cause of socialism in the United States.

Yet it has been nearly a century since drivers were regularly blamed, let alone penalized, for automobile violence. In concurrence with changes in city design, an evolving consensus made driving legally protected — and walking (and riding a bicycle) legally vulnerable.

Today, most cities have begun to chip away at the design errors of the automobile era, with bus lanes, bike lanes, zoning updates, parklets and plazas. This is happening both in big cities with low levels of car ownership, like San Francisco and Chicago, and in small towns and suburbs where pedestrianism is a choice.

Yet these design modifications will look as uncontroversial as seat belts compared to a call to discipline bad drivers with new strictures.

How should a driver be punished for making a mistake that kills a pedestrian? After decades of leniency, and prompted by advocates and the relatives of victims, authorities are finally beginning to take automobile violence more seriously. They will not, however, find a compromise that pleases anyone.

While conflicts over bike lanes and street infrastructure have raged at community board meetings and on magazine covers, the dispute over punishment for driving infractions has seethed quietly in the background. Drivers have been particularly successful in limiting the scope of speed cameras and red-light cameras and lessening fines for infractions. Automatic enforcement of traffic violations, in the view of some state legislators, constitutes a kind of unjust police scrutiny.

Thus has the state of affairs been. But earlier this month, an accident in Brooklyn forced a public reckoning on the issue of guilt and punishment for negligent driving.

According to reports, a longtime New York City bus driver made an errant left turn in Williamsburg, hitting a 15-year-old girl who had been crossing the street with a walk signal, and pinning her beneath the vehicle. The girl appeared likely to lose her leg; the bus driver was led away in handcuffs.

The incident itself was, sadly, unremarkable. Bus drivers have killed 18 people in New York over the past two years. More than 300 New York pedestrians died by car during that same period. Nor was the incident unusual for its legal transparency: In previous crashes — notably the one that killed 3-year old Allison Liao in Queens 16 months ago — the victim's right of way has been equally well-established.

The reaction to the crash, however, crystallized the various perspectives on the issue. The bus driver’s union was outraged at its traumatized member's treatment by the police. Advocates for safe streets were happy to see even nominal police interest in a crash scene, after years of investigative negligence. The Daily News said what happened was an “accident." Transportation Alternatives called it a “violent criminal act.”

Can both of these things be true? Such is the tyranny of the automobile transportation system: It demands our regular allegiance, our twice-a-day use, years of our lives behind the wheel. It’s a binding national routine. And yet the banality of driving sits in uneasy contrast with the astronomic consequences of making a mistake.
Harmful driving is criminal, but its systemic roots can't be ignored: The modern city is dangerous by design.

That means, on the one hand, that streets requires high speeds, left turns across traffic into crosswalks, and turning across bike lanes. But it’s also a broader indictment of heavy automobile use in cities, which, in close proximity to thousands of pedestrians and cyclists, spawns a specter of violence that can’t be vanquished by speed limits or intersection design. (The vaunted Vision Zero effort in Stockholm, Sweden, has cut pedestrian deaths by 31 percent over 15 years. It’s a formidable achievement, but also an indication of how hard progress comes to even a nationally sanctioned effort.)

The auto lobby is reluctant to admit that there's a structural problem here because drivers don’t want to see changes to an environment well-suited to their needs. Advocates for pedestrians and cyclists are split on the issue: They’ll slam bad design at particular intersections, but they’re also wary of embracing a kind of environmental determinism that would introduce "dangerous design" as an excuse for bad driving.

But it is -- and must be -- possible to insist on drivers’ culpability while acknowledging that the whole system that places fast-moving cars, trucks and buses in a busy city is built on an uncomfortably high level of risk.

New drivers sometimes perceive this mismatch between ease and consequence. Adam Gopnik, writing earlier this month in the New Yorker on learning to drive in middle age, saw the immense, unacknowledged hazard as he turned through a crosswalk. “Driving, I realized, isn’t really difficult; it’s just extremely dangerous,” he wrote. “Making hard things easy is the path to convenience; it is also the lever of catastrophe.”

Longtime drivers are inured to this sense of terror. We have to be. At a practical level, contemplating the consequences of a car crash is incompatible with driving the vehicle itself. Daily car use requires of us a psychic sangfroid.

How do you punish an error in such an arrangement? How do you reconcile the murderous consequences of a mistake with a system of movement in which participation is a virtual requirement of American life?

Of more immediate import, how much guilt rests with a law-breaking driver, and how much with the streets themselves?