The stifled ceremony came alive when "Glory" stirred something frustrated, something human inside the stars 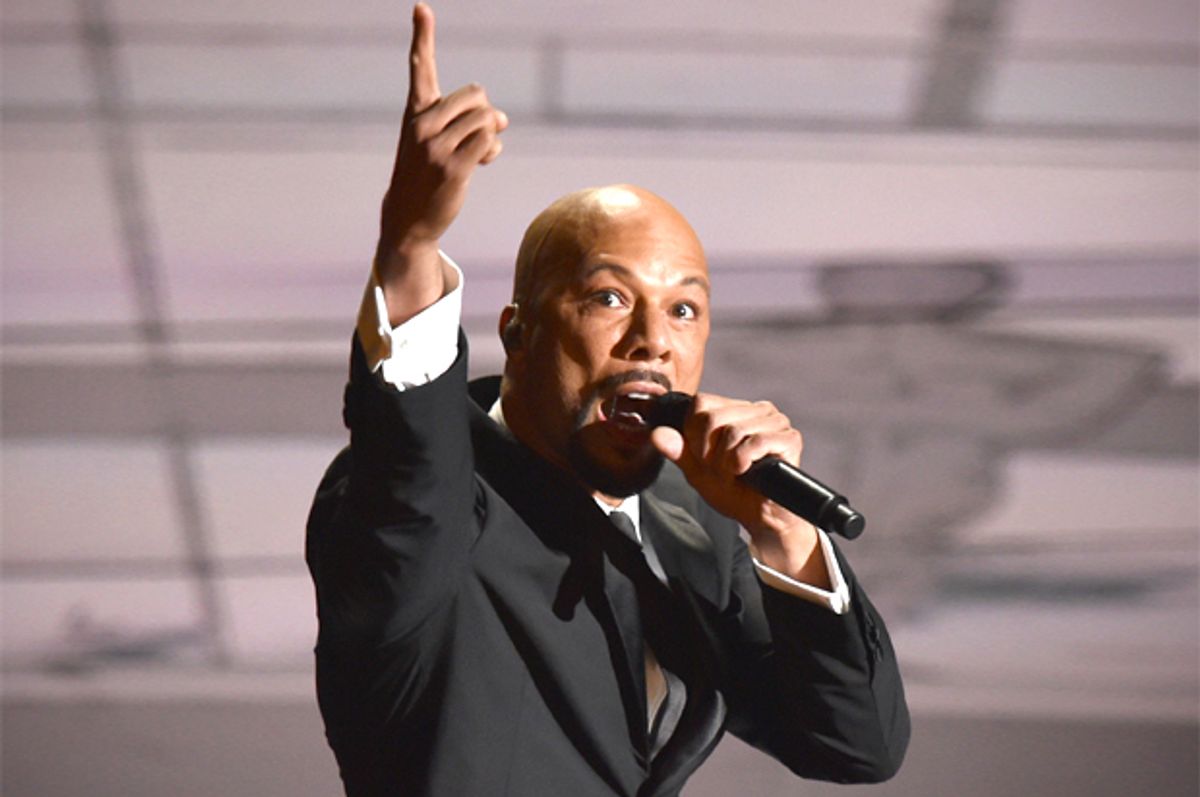 The primary feeling to come off of last night’s 87th Academy Awards was not elation or disappointment but a more slippery, more irritating, more contemplative feeling: the hollowness of a missed opportunity, the sweaty frustration of thwarted desire. Yes, I’m being a bit florid. But overwrought language seems to be the only way to really describe the energy in the room, which seemed to simmer with if not exactly discontentment, then at least with the awareness that the platitudes of the Academy of Motion Picture Arts and Sciences were a little more hollow than usual.

The moment of change came when musician John Legend and rapper Common took the stage to perform “Glory,” nominated for Best Original Song. “Glory” is “Selma’s" song, and “Selma” was this year’s much-discussed, ill-resolved Oscar snub. The film created a lot of critical excitement when it was released, but failed to make a big impact in the academy’s nominations; many people, including myself, observed that a largely white industry would find it easy to dismiss “Selma.”

In the days leading up to the Oscars, it seemed like more and more critics and Hollywood insiders were finding a way to spin “Selma’s" exclusion as a good thing. The Hollywood Reporter published a fascinating series of lightly edited, anonymous interviews with academy voters, and nearly everyone started the conversation by protesting, with too much defensiveness, that “Selma” wasn’t snubbed because of race, it just happened to be a not-very-good film. (The influence of cultural conditioning on what we consider “tasteful” was, naturally, left out of the discussion.) An A.V. Club round table carried the provocative headline “Maybe the Oscars got it right this year,” neatly sidestepping the conversation around “Selma” to discuss indie favorites like “The Grand Budapest Hotel” and “Boyhood.” And a voter interviewed by Entertainment Weekly went so far as to say: “It’s almost like because [‘Selma director Ava DuVernay] is an African-American, we should have made her one of the nominees… I think that’s racist. Look what we did last year with ’12 Years [A Slave].’”

Those opinions might have been present in the Dolby Theater Sunday evening, but they didn’t seem to be the majority. As David Sims of the Atlantic pointed out to me: Most academy voters are industry veterans; few of them would be in the audience for the Oscars themselves. This isn’t an awards show where the winners are being awarded something from their peers; this is not a democracy, even of just the people in that room. That has always been the case with the Oscars, but this is the first year that I could sense that was the case. It was even in the look on Meryl Streep’s face when her performance in “Into the Woods” was nominated for Best Supporting Actress—a subtle little eye roll that echoed her Emmy acceptance speech from a decade ago for “Angels in America”: “There are some days when I myself think I’m overrated …”

It was Streep’s reaction to Patricia Arquette’s acceptance speech that first signaled to me something different about the night; until then, it had plodded along desperately, with Neil Patrick Harris doing a lukewarm job holding together a show that was bored with itself before it even began. It’s not uncommon for winners to get political in their acceptance speeches, as Arquette did, calling for equality for women. It is uncommon for well-heeled members of the audience — including front-row, A-list guests Streep and Jennifer Lopez, to her left — to respond with anything other than mild embarrassment. The Oscars, like much of Hollywood, are typically the Blasé Olympics: Losers smile and clap through their disappointment, awkwardly long speeches are played off with soothing orchestral music, and even the most liberal firebrands are expected to put on a nice dress and/or a suit and sit quietly throughout the proceedings. But here was Streep, leaning so far forward in her chair she might have been at church, and stabbing emphatically at the air in support of Arquette’s speech. Next to her, Lopez looked flabbergasted, but in a good way. And this, on a night where the entertainment was dull, the winners predictable, and the first true victory of the night went to a charming Polish man totally uninterested in heeding the playing-off music. It was, as far as the Oscars go, a powder keg waiting to blow.

The performance of “Glory” was the spark. Best original song is a category that invites spectacle, typically in the guise of artists from vastly different genres coming to the same stage and breaking the Oscar host’s rhythm with 90 seconds of a song. By now, though, Legend and Common have gotten very good at their stage game—they performed at the Grammys, too, earlier this month—and after rather minimalist performances from Adam Levine, Rita Ora and Tim McGraw, Legend and Common performed with dozens of extras on a reproduction of the Edmund Pettus bridge. The extras came down the steps of the stage to the carpet, and for a moment it seemed like they might storm the aisles, singing “glory, glory” and marching for freedom. They didn’t. But unexpectedly, the audience rose to their feet en masse, and this after the standing ovation for J.K. Simmons came in fits and starts.

Standing ovations aren’t exactly rare at the Oscars—though they are rare for a category as marginal as Best Original Song. But the fervor of it was unlike anything I’ve seen before—at least, as it was picked out by the producers of the show. David Oyelowo, the star of “Selma,” was openly sobbing in his seat (directly in front of Oprah). Actor Chris Pine, seated elsewhere, had tears streaming down his face. Presenter Jessica Chastain was visibly moved. Immediately after the performance, “Glory” won best song, and the entire audience stood up again. Was it motivated by guilt, or by an especially good performance of the song, or something else entirely? I don’t know, but once the artists finished their (very moving) speech, the audience stood up and applauded, again. (Pine was one of the first to spring to his feet.)

I wondered about this as the telecast continued, for the audience seemed unlocked by “Glory,” and the latter half of the show was a lot more emotionally freewheeling than the former. The audience that could barely muster up the energy to applaud through the “In Memoriam” segment of the show rose to its feet again when Julie Andrews walked out to present Best Original Score, at least in part because musician Lady Gaga poured her heart into a pitch-perfect, incredibly theatrical medley of songs from “The Sound of Music.” An hour earlier, that might have been just another moment the Oscars audience would have stonefacedly not cared about; by 11:15 p.m. Eastern time, it felt like any emotion at all was on the table. And as the awards limped to their silly, anticlimactic close—where three or four movies about white men bickered over which should be the winner—it was abundantly clear that the real story of the night was about how the typically stodgy ceremony felt.

Given the academy’s self-satisfied enthusiasm for “Birdman,” an “arty” film that confirms the body’s pretensions to sophistication, it is not too surprising that “Selma” got snubbed along with the Roger Ebert documentary “Life Itself,” in which the great film critic says that movies are “machines of empathy.” He continues: “It lets you understand a little bit more about different hopes, aspirations, dreams and fears. It helps us to identify with the people who are sharing this journey with us."

I keep coming back to Chris Pine. Oyelowo worked with Common on the set of “Selma” and he was notably snubbed a nomination for his role — it makes sense that he was moved by seeing “Glory” performed onstage, even if I don’t know exactly why he was crying. Pine is harder to make out. He was one of the presenters for the Academy Award nominations, earlier this year, with academy president Cheryl Boone Isaacs and directors Alfonso Cuaron and J.J. Abrams. He’s not particularly famous, or particularly successful—his breakout role as Captain Kirk in the “Star Trek” reboot films (directed by Abrams) is still his most memorable role, from 2009. (He’s very good in the role. He just hasn’t found the next thing, so far.) Aside from this presenting gig, there is no particular reason for him to be at the Academy Awards.

At the end of the day, though, Hollywood is not my industry, my workplace, my de facto home. It’s Pine’s — and everyone else in Hollywood, including Streep and Oyelowo and Arquette and Chastain. I imagine that it would be very frustrating to see a film that you loved, and found to be important, get snubbed — when you actually live and work in that industry. Even though you are just a somewhat famous actor with one recognizable role under your belt — especially because of that, in fact. It’s not an easy world to break into, and it’s a thankless, backbiting industry. But you do it because of the empathy machine. Because you, Captain Kirk, believe in the power of film. That’s why you’re here. And that’s why you stand up.