Oscars 2015: Nuggets of electric political theater, amid oceans of lame 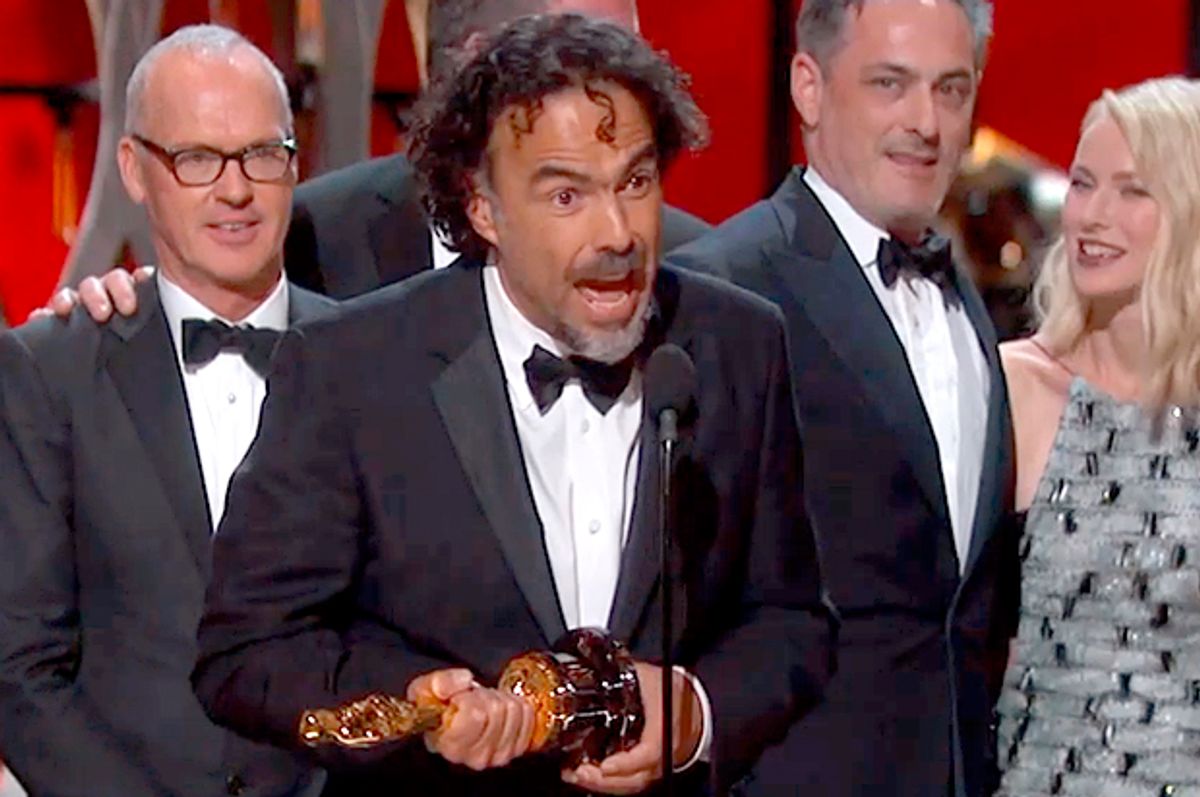 Wait, why do people watch this show? I’m not being snarky; it’s a useful question. In cultural terms the Oscars are nowhere near what they used to be, and watching the Oscars isn’t what it used to be either. I don’t say that’s entirely a bad thing! Considered by the normal standards of television entertainment, the overstretched, filler-filled, three-and-a-half-hour spectacle formerly known as the Academy Awards (even the rebranding reeks of desperate demographic questing) laid another giant egg this year. Still, I’m sure the ratings will be huge; this remains one of the few true mass-culture events in a narrowcasting era. And a handful of moments and images from Sunday night’s show are already huge social-media phenomena. Which might point us toward the conclusion that the Oscars are not normal television entertainment but something else.

Yes, in old-fashioned showbiz terms there were a couple of delirious highs, emphasis on the high: Lady Gaga singing a “Sound of Music” medley – and singing the living crap out of it – and the lysergic “take that, Katy Perry” production number for “Everything Is Awesome,” which appeared to delight many viewers and bewilder many others. (Was ?uestlove dressed as a character from the “Hellraiser” movies? I guess not; that was my ‘80s drug damage talking.) And yes indeed, there were the electrifying social-justice notes struck by Patricia Arquette, by Common and John Legend, and by “Birdman” director Alejandro González Iñárritu. It was those moments that redeemed the communal experience, or came close to doing so, and also suggested what the Oscars are struggling to become. A factory producing viral memes for liberals? An impromptu rally for the center-left of the Democratic Party? Well, yes. We’ll get back to that.

It’s not like unscripted political statements haven’t made news at the Oscars before, and I don’t just mean relatively recent history like Michael Moore’s famous “Bowling for Columbine” acceptance speech, or relatively tame comments by Susan Sarandon and Tim Robbins. Go back and Google “Sacheen Littlefeather” (the Native American activist who accepted Marlon Brando’s “Godfather” Oscar), or check out Vanessa Redgrave’s shocking 1977 speech, in which she accused “Zionist hoodlums” of campaigning against her. But there’s a big difference: Those things were viewed as bizarre and undesirable interruptions, amid a pageant full of glamour and suspense and drama and fantasy and mild self-mocking ribaldry. (Moore was audibly booed in 2003, and presenter Paddy Chayefsky publicly rebuked Redgrave.) But the old-school showbiz pageant really doesn’t work anymore, and I would go so far as to say it isn’t the point. This year the issue-oriented injections didn’t just feel like high points but like the principal text of the show.

Maybe expectations were too high for first-time host Neil Patrick Harris, as graceful, witty and talented a performer as anyone in the trade, but if he can’t redeem the Oscars in their current format, I suspect they can’t be redeemed. After an agreeable (if only mildly amusing) opening song-and-dance number with Jack Black, Harris floundered and struggled against a stale script and its leaden gags. He repeatedly fumbled names, appeared to go blank for several seconds while eye-locked with a seat-filler, and evidently paid no attention to what was happening when he wasn’t talking. He made a crack about a dress worn by the director of a short film about two seconds after the woman had finished talking about her son’s suicide, and stepped on director Laura Poitras’ powerful acceptance speech for the documentary “Citizenfour” with a weirdly reactionary joke about Edward Snowden and “treason.”

The whole experience made me wonder whether I actually liked Harris as much as I thought I did. But that’s not quite fair: He’s an actor who was trying to play a role as written and directed by others. It’s really just the accursed nature of the Oscar broadcast, whose principal mandate is to fill out an entire evening, maximize ad revenue and jam the big awards into the last 15 minutes, and whose ponderously unfunny script always seems to be written by the same accounting firm that counts the votes. That third-rate David Blaine thing with the sealed predictions in a box, and Harris’ forced attempts to get some shtick going with Octavia Spencer? Jesus Christ. It just would not stop. (I appreciated that when Harris tried to drag Robert Duvall into it, Duvall gave him nothing.) But seriously, people, and I know this is heresy of a high order: Seth MacFarlane was funnier! At least he had the courage to make an ass of himself! Even James Franco and Anne Hathaway were … well, OK, no they weren’t. That event – the hip, cool, millennial youth-culture Oscars that weren’t -- has been expunged from our memory.

Furthermore, the actual awards and the movies being honored – certainly this year, and in a lot of other recent years -- are pretty much an afterthought. Most major categories were locked down before the show began, and by midway through the broadcast it had become evident (at least to the tiny contingent who follow or cover the horse race) that “Birdman” would take the biggest prizes. We had a best-picture race between two films that have been seen, at an extremely generous estimate, by 1 percent of the 1 billion or so people watching around the world. All four prize-winning actors this year also appeared in small-to-medium indies that were not big hits, and won’t become big hits even after this boost. Very few people watching had a passionate rooting interest. There was certainly a Twitter contingent upset that Richard Linklater’s “Boyhood,” the year’s big critical fave-rave, won nothing beyond Arquette’s supporting-actress prize. But it’s not like “Birdman” is a superhero sequel or something; it’s a formally adventurous low-budget indie shot in New York, featuring a guy who was a star 25 years ago. (And with his moving and funny comments on immigration, Iñárritu made the most of his moment.)

There was a mildly paranoid social-media meme going around the last few days, to the effect that Academy voters might throw all previous precedent and discernible pattern out the window and go with “American Sniper” as best picture – in an attempt to connect with popular taste, or not to seem overly liberal, or just to troll the world and make themselves the center of attention. That was never remotely likely to happen, but it’s an interesting thought experiment. Although the people spreading that idea were officially horrified by it, I think it contained an element of wishful thinking. If the Academy really did give its biggest prizes to movies beloved in the heartland states, or scrambled to respond to films that become news events and cultural touchstones, that would render the whole Oscar process far more dramatic and less predictable.

In short, the Oscars – meaning not just the show but the actual awards -- would appear to matter, in cultural terms, in a way they simply don’t right now. Depending on our perspective, we could have celebrated and shed patriotic tears, or hurled bitter invective and burned the flag. If “American Sniper” had won the Oscar, the whole country and quite likely the whole world would have had an opinion: What did this tell us about Hollywood or war or the current moral state of America or whatever else. Instead, what we learned about Academy voters is what we already knew: They cautiously winnow down their choices, looking for that deliciously mild Oscar-y flavor, and they’re super self-absorbed. For the third time in four years, movie people have given their biggest trophy to a movie about how crazy and cool and creative and tormented movie people are, and to a movie nobody in the real world much cares about. (Like “Argo” and “The Artist” before it, “Birdman” will enjoy a brief moment of acclaim and slowly slide toward the back corner of the memory shelf.)

During the dead spots in the Oscar broadcast -- and most of Sunday’s show was dead spots, am I right? – you could feel the social-media stream build into a rushing torrent of quips and complaints and gasps of amazement, moving past too rapidly to grab hold of or comprehend. Many TV shows are now communal Twitter events for their fans, of course, but the scale of Oscar viewership is so huge that the experience becomes exponentially different, and the peanut-gallery explosion of competing voices is often far more entertaining than what’s happening on screen. Whether this is entirely conscious or not, the Oscar broadcast is adapting itself to this new reality: In formal terms, Harris didn’t much matter. His mandate was to move us along in minimally offensive fashion from commercial to commercial, and from one potentially provocative or explosive celebrity moment to the next. Sparking a zillion Vines of Meryl Streep jumping out of her seat in response to Arquette’s wage equality speech is pretty much the point. Those are the things that make this show feel somewhat relevant and connected.

If we can put it this way, the “entertainment value” of the Oscars is no longer about who wins and who loses. Hardly anyone cares! Honorees who still behave as if the art and craft of making movies were the subject matter here misunderstand their historical mission. (Sorry, J.K. Simmons! I briefly wanted to call my mom, but that faded.) Amid a long evening of bad jokes and inexplicable musical numbers we get a few moments of micro-scale political theater, starring moderately famous people for whom we feel a sudden burst of affection, talking live in front of the whole world about something they believe is important. If these moments are not exactly managed or scripted, they’re not entirely unexpected either. Whether or not it’s politically effective for Patricia Arquette to address wage equality in 15 seconds, or for Common and Legend to raise the issue of rates of incarceration among black men on the whitest Oscar night in recent history, I have no idea. But we all felt the sudden injection of meaning and power, in a meandering spectacle that otherwise had none.