Inside the Troubles of "'71": This Belfast war thriller is (almost) an Iraq war movie in disguise 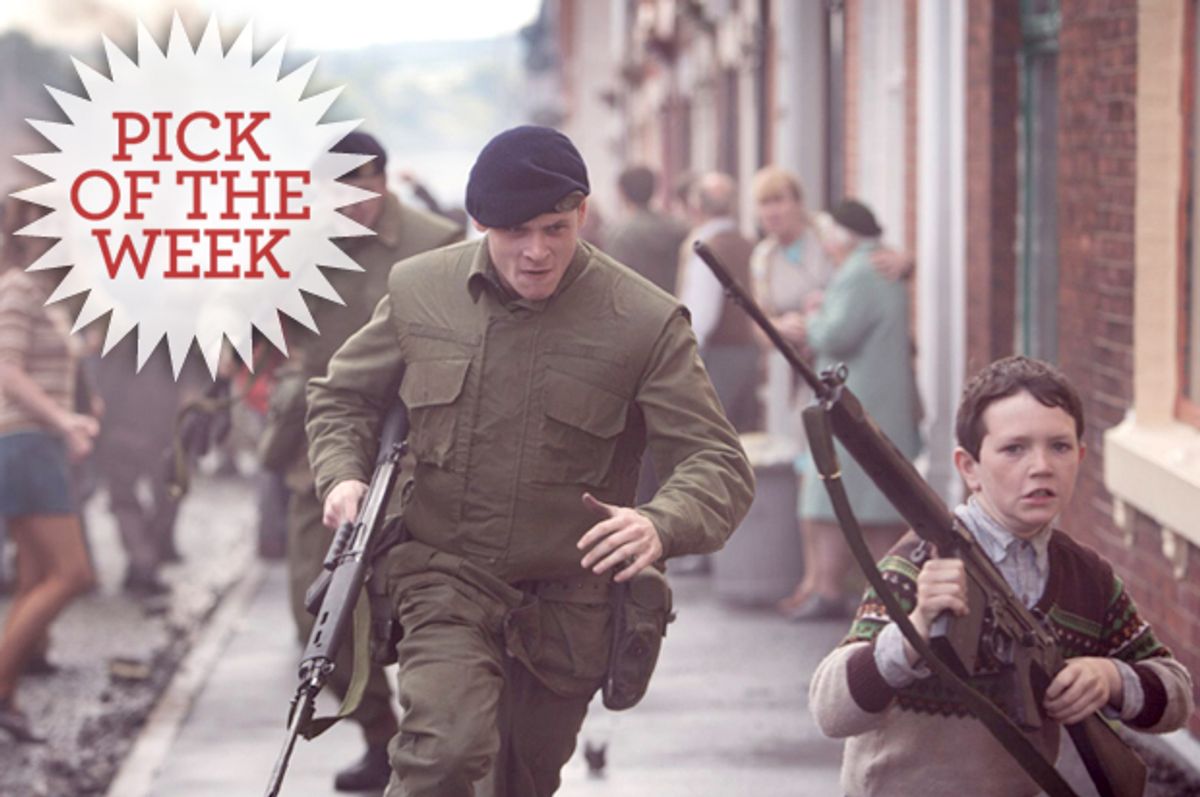 What was often called the “Troubles” in Northern Ireland may look like an almost inexplicable event from this historical distance: three decades of low-level, three-way guerrilla warfare (roughly 1969 to 1998), fought between bewildering bands of white people on the outermost edge of Europe over apparently ancient religious and territorial grievances. One of the neat sardonic touches in French-born director Yann Demange’s riveting Northern Ireland war thriller “’71,” in fact, is its reminder that the only people of color ever involved in that conflict were occasional British soldiers of Caribbean or South Asian ancestry. When Private Hook (Jack O’Connell) and his British Army comrades arrive in their spartan Belfast barracks, the requisite hard-ass sergeant jokes that they only have to sleep there until they get shot by the Paddies -- delivering his speech in a thick Jamaican accent. Demange and writer Gregory Burke don’t try to drive home some didactic point about the history of imperialism and colonialism, but that lesson is present in every frame of “’71.”

Hold those cards and letters, my compatriots – I’m aware that my first sentence is nowhere near an adequate summary. The Northern Ireland conflict was difficult enough to understand while it was happening, but it always possessed a broader symbolic importance than its modest scale demanded. (Total casualties in that 30-year war were about 3,500 killed and 48,000 injured. The city of Houston, with about the same population as Northern Ireland, had roughly twice as many violent deaths during the same period.) If the worldwide Irish diaspora viewed the Troubles through a prism of nostalgic and sentimental nationalism, the conflict also had dangerous undertones of radical internationalism. (The Irish republican movement made at least occasional connections to third-world revolutionaries in Africa and Latin America. The extent of covert Soviet aid is still a buried secret, but it was greater than zero.) Northern Ireland was a small but significant fissure in the historical narrative that led from the Allied victory in World War II to the global victory of capitalism and liberal democracy in the Cold War. It is through such cracks, as Leonard Cohen once observed, that the light gets in.

I don’t want to go too deep into the convoluted tale of what happened in “the North” -- as every Irish person on either side of the sectarian divide calls Britain’s leftover colony -- or we’ll never get back to “’71,” which captures the claustrophobic ambience of its time and place in grimy detail. It’s a riveting, man-on-the-run genre movie, almost a combination of “Black Hawk Down” and “After Hours,” rather than an allegory or a historical treatise. But some degree of pre-echo or contemporary relevance is unavoidable. It might be a stretch to call “’71” an Iraq movie in disguise, without sandstorms or muezzin calls, but we are surely meant to notice the parallels. O’Connell, the prodigious young English actor (of Irish ancestry) who starred in Angelina Jolie’s “Unbroken,” here plays an ordinary British soldier from the underside of the class system, who gets left behind in the streets of Belfast by an incompetent commander after an apparently simple mission goes south. As Private Hook wobbles back and forth across the boundary between Protestant and Catholic neighborhoods, he’s hunted by IRA gunmen who want to kill him and British plainclothes operatives whose agenda is less obvious but not necessarily less sinister.

Private Hook’s education, during his struggle to get back to barracks alive, lies in learning that nothing in Northern Ireland is exactly what it seems. Although supposedly an integral part of the United Kingdom, Belfast in 1971 is a foreign city with unfamiliar codes. The jukeboxes may play the same records, but every dingy pub has a tribal identity, and Hook remains an outsider everywhere he goes. Even the “loyalist” Protestant population is not British in the same sense that Hook is; few actual English people can match the intense flag-waving patriotism of a hardcore Ulster Orangeman. Paramilitary groups on both sides – the Catholic IRA and the Protestant UVF, along with a whole array of radicalized offshoots and splinter groups – are enmeshed in a complicated dance with the brutal local cops (who are pretty much a Protestant militia with badges), the supposedly impartial peacekeepers of the British Army and the dark forces of British intelligence, who seek to control all the pieces on the chessboard.

While the twists and turns of Burke’s screenplay remain a little obscure, in classic political-thriller fashion, even if you can identify all the players, some American viewers may be entirely mystified. I think the important plot point is clear enough: Hook becomes a Hitchcock-style renegade who knows too much, and represents a threat to all sides in the ghoulish war economy of Belfast. He knows, for instance, that a bombing in a Protestant pub that is certain to be blamed on the IRA, and used as a justification for paramilitary counterattacks and a military crackdown, is one of the things that’s not what it seems. Beyond O’Connell as its everyman Odysseus, “’71” is a plot movie rather than a character movie, but there are nice supporting turns from Killian Scott as a young IRA hothead, David Wilmot as his conflicted superior and Sean Harris as a plainclothes British officer whose primary concern is damage control. Hook’s hair-raising, all-night adventure culminates in an implausible shootout that feels imported from another kind of movie, but even there Demange aims for some striking notes of empathy, as Hook realizes that the other young men killing or dying in Belfast don’t understand what they’re doing it or why any more clearly than he does.

As I’ve said, there’s no overt political text to “’71,” but you could tell much the same story in Mosul or Baghdad without changing anything essential. Beneath its mediagenic allure, Northern Ireland served as a prototype or lab version of the “war on terror,” which was launched just three years after the Good Friday accords of 1998 began to wind down the Irish stalemate. (Similarly, in earlier centuries British rule in Ireland served as the training ground for policies pursued on a grander scale throughout the British Empire.) Sophisticated torture tactics pioneered by British intelligence against IRA detainees in the ‘70s and ‘80s became the basis for the “enhanced interrogation techniques” used by the CIA in secret black-site prisons during the Bush-Cheney years. Sleep deprivation, heat and cold, darkness and solitude, unrelenting loud music and “stress positions” – modes of physical and mental distress that generally won’t kill you, or leave obvious bruises – were all painstakingly explored and documented. It’s not like any of this was a huge secret; go back and listen to the 1979 Gang of Four song “Ether,” with its chorus of “White noise in a white room.”

What we might also find in “’71,” if we assume that it’s not just an exciting war film set in a strange corner of recent history but to some degree a film about war, is the fact that occupying powers never learn the most obvious lessons. Northern Ireland was a teeny-tiny British cognate to Vietnam, which seemed to pose far less of a challenge: It was literally right next-door, with no massive language or cultural barrier. The opposing guerrilla army was poorly armed, and probably never numbered more than 2,000 people. Yet despite massive military expense, all those ingenious torture tactics and the deaths of more than 1,000 soldiers in what was supposedly their own country, the British were never able to defeat an insurgent movement rooted in an unhappy civilian population. Some things don’t change.

”’71” opens this week at the Angelika Film Center and AMC Lincoln Square in New York, and the ArcLight Hollywood and the Landmark in Los Angeles, with wider release to follow.