Madonna's fall was her greatest performance

A viral worthy tumble gives an icon a human touch 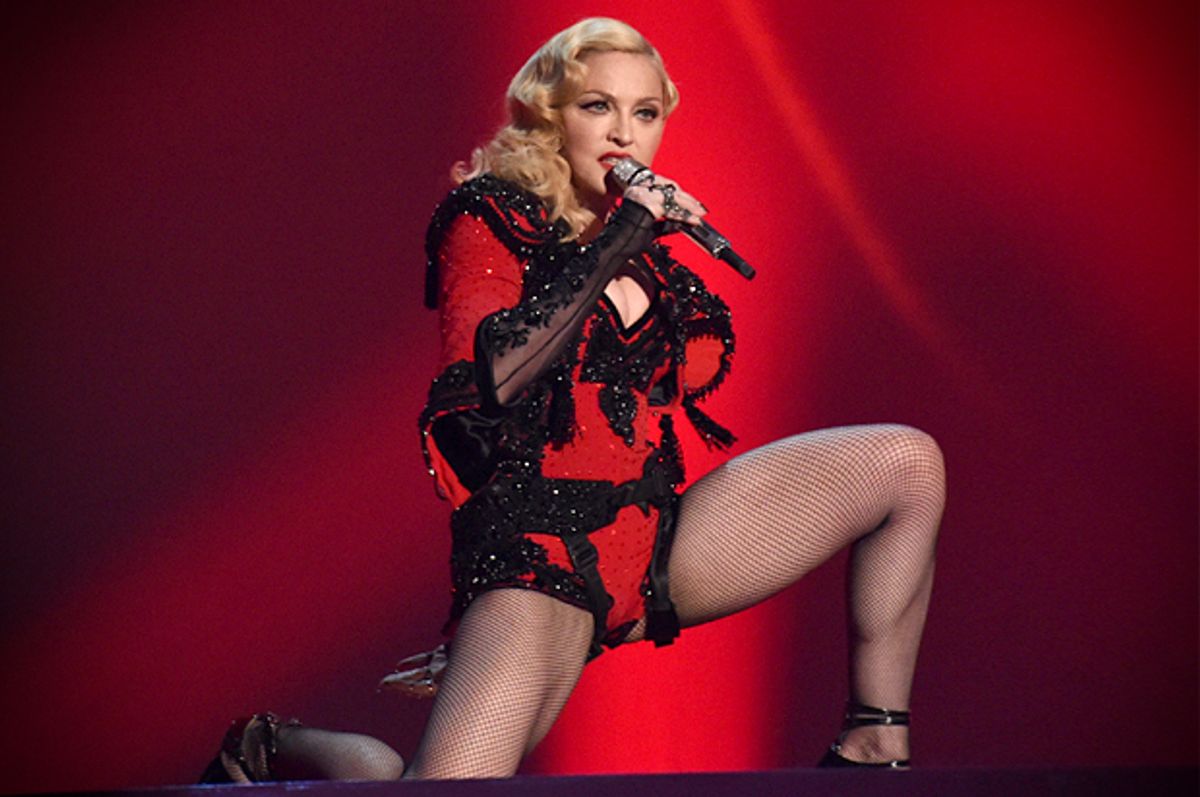 During the finale of Wednesday night's Brit Awards, the always showstopping Madonna once again made audiences around the world gasp. But this time, the performance was as surprising to her as it was to viewers. As she stepped to the stage for her first time back at the awards in two decades, her dancers were supposed to pull her flowing Armani cape away from her shoulders. Instead, the garment remained tied around her, causing her to fall into a backwards tumble. Ever the pro, she then got up, finished the performance and posted on Instagram, "Armani hooked me up! My beautiful cape was tied too tight! But nothing can stop me and love really lifted me up! Thanks for your good wishes! I'm fine!"

Of course, a splat of that scale was all but begging to go viral, and by Thursday morning, the image of a falling Madonna was the subject of both clever memes and cruel jokes, mostly involving an old lady falling down. Certainly no one seemed to enjoy the incident more than Madonna's arch nemesis, 49 year-old Piers Morgan, who tweeted, "Ambulance for Granny, please." Funny, I don't recall any gleeful gramps jokes when Prince, who at 56 is the same age as Madonna, showed up recently at the Golden Globes and Grammys.

The world is a cruel place for a woman who dares to commit the sin of growing older, and Madonna has certainly been valiant about keeping time at bay. She's fit, strong and still cranking out new material, and to make fun of her simply for being in her fifties is sexist and lame and represents everything that makes me froth at the mouth on a daily basis. Yet I'm not ready to make a tearful "Leave Madonna alone" video for YouTube yet either. And I'm unconvinced by the Guardian's defense of her that asks, "Why should anyone have to swallow the world’s unstinting hatred when she wants to be remembered for her brilliant artistry?" Does she? Is she?

As a mouthy feminist GenXer, I have tried to keep relatively quiet about my near total disregard on the subject of Madonna for the better part of my life. Sure, it was entirely acceptable to be dismissive of her – with her thin voice and her lightweight hits and her penchant for rolling around on the stage at the VMAs -- early in her career. And yeah, "Like a Prayer" is a good song. But somewhere along the way, she supposedly morphed into an icon of female empowerment. I think it was around the time of the cone bra. And from then on, to be underwhelmed by her was tantamount to betrayal of womanhood.

Through all of her ostensible reinventions, from Material Girl to the naked hitchhiker of "Sex" to Ray of Light yoga goddess to her current sexy bullfighter incarnation, I've always been unconvinced her persona was more than a carefully calculated new costume change. She's been in the public consciousness for 35 years; I've been around for all of it, and I can rarely recall more than a handful of moments she appeared to be authentic. That's why I've never connected with her. To me she's an efficient, hardworking, emotionless machine, even in her allegedly more "real" moments like "The Power of Goodbye."

I don't buy that a woman has to age in any particular preordained way in order to be palatable to her audience, though I can't help noticing how Bruce Springsteen gets to be a sex symbol at 65 and Madonna gets laughed at for being an "old bird." But I do think the steeliness that's always been such a big part of her identity becomes harder to pull off with time. It's not about whatever one may think of her sexiness – because hell, she still looks better than most of North America. It's about her teeth gritting seriousness. Cher and Tina Turner have managed to go on dancing and strutting and wearing short skirts into their sixties and seventies, but they've done it in a way that suggests they're having fun. Madonna, in contrast, seemed at her recent Grammys performance as flawlessly mechanical as ever. Watching her that night, I felt exactly as I did thirty years ago – that Annie Lennox is just so much more compelling.

So maybe the shock and subsequent excitement over Madonna's fall Wednesday night wasn't entirely schadenfreude. Maybe it was also the surprise of seeing this larger than life creature become, for a few seconds, vulnerable. And though I despise the gleeful crowing over her stumble, I didn't dislike the stumble itself. In fact, as she lost control and a look of concern flashed briefly on her face, it was one of my favorite moments o her entire career. Through all her decades of incarnations, it was one of the rare times she seemed truly human.