Should a cop be made to participate in a gay pride parade?

An officer speaks out about the choice that changed his career 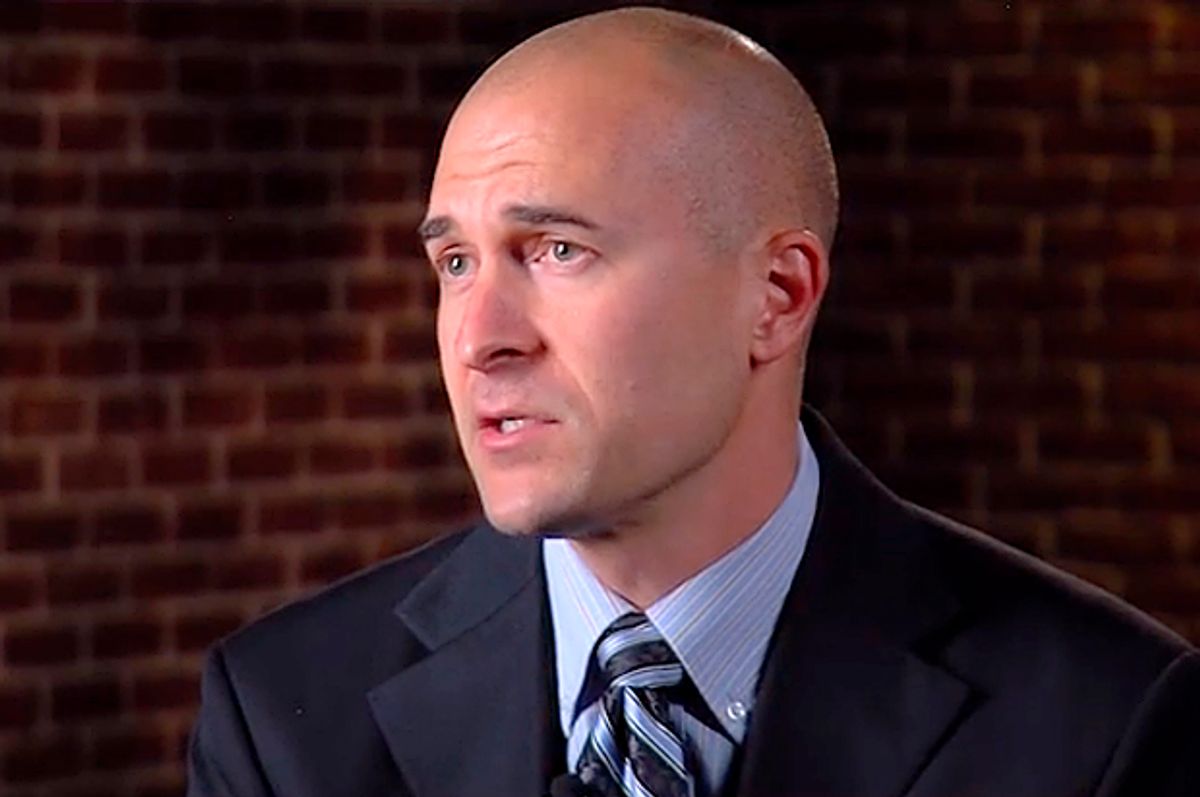 The conflict began for Moutsos last year, when he says he asked to switch his assignment duties for a gay pride parade. As Moutsos, a Mormon and father of four, said in a lengthy statement to local station KSL earlier this week, back in June the Salt Lake City Motor Squad Unit was invited to the Utah Pride Parade, an event that would include "performing choreographed maneuvers on motorcycles." Moutsos, a member of the unit, says he was told to participate but because of his beliefs, requested to be switched to pedestrian and traffic control. He claims he has always upheld his obligation to protect the public, including providing security for same-sex couples who've come to the Salt Lake City-County Building to be married. And in 2009, Moutsos appears to have taken a complaint regarding a gay couple kissing on Mormon Church property that went at odds with the account of the security guards who called the cops.

But with regard to the parade, he says, "I felt that by being an actual participant… I would be perceived to be supporting certain messages that were contrary to who I am. I will protect their parade. But I just don't want to be in the parade." He claims that "doing what he considered celebratory circles with other motorcycles" would conflict with his views. And for his request to not be made to do donuts, he says, he was placed on administrative leave "for discrimination" and branded a bigot after the story broke. He resigned soon after. Moutsos now says to the LGBT community, "I say to them that I love you. I probably agree with 95 percent of your life or more. And I wish we could find the things that we do agree with and build from there. But there are just certain messages that I will never advocate."

Moutsos is not a likely candidate to show up at the next Lady Gaga gig. On his Facebook page, he posts about his horror at abortion, and his Mormon beliefs. His Instagram includes a photo of a gun and the caption, "Glock 42 ... I love the 2nd Amendment :)." And he says that "I would feel the same way if this was an abortion parade. I would feel the same way if it was a marijuana parade." But Chief Burbank argues, "It has nothing to do with religious freedom, that has to do with the hatred of those individuals and what the parade stands for, which is about unity and coming together. How can I then send that officer out to a family fight that involves a gay couple or a lesbian walking down the street?"

Wait, so if you don't want to celebrate something it means you're incapable of defending it? Really? Well then watch me do it right now.

I would love nothing better in this world than for all of our LGBT brothers and sisters to have the same rights and opportunities in every state, in every town, in every corner of the world. I believe they should have equal access to marriage, insurance, and work. I am heartbroken that LGBT kids are bullied and harassed to death and that too many families and schools do too little to protect them. I would love for the term "gay marriage" to be rendered obsolete, because love is love and marriage is marriage and we shouldn't need special categories for the same-sex version. I would love for everyone to understand there is nothing "traditional" about remaining stuck in the past. My personal moral belief is that anyone who believes that being gay is an impulse that has to be controlled is deeply sad and misguided. And I also believe nobody should be made to participate in any parade or public event they don't want to.

I have gay friends in the military and public safety fields, some in deeply conservative environments. I believe in their commitment to do their jobs and to protect the citizens they work for, including citizens whose religious and political views are diametrically opposed to their own. I don't know what kind of a cop Moutsos was, but I do know that's what you're trained to do in a service career. If I can believe my friends can do their jobs without bias, how can I not – even as I disagree strongly with his personal beliefs – think that Moutsos could do his? And I don't understand how could trying to make someone ride in a parade he doesn't want to be in is any kind of progress for tolerance.