"What color is this dress?": The Internet's (curiously) civil war between perception and fact

Even Kim and Kanye can't agree: "Who is color blind?" 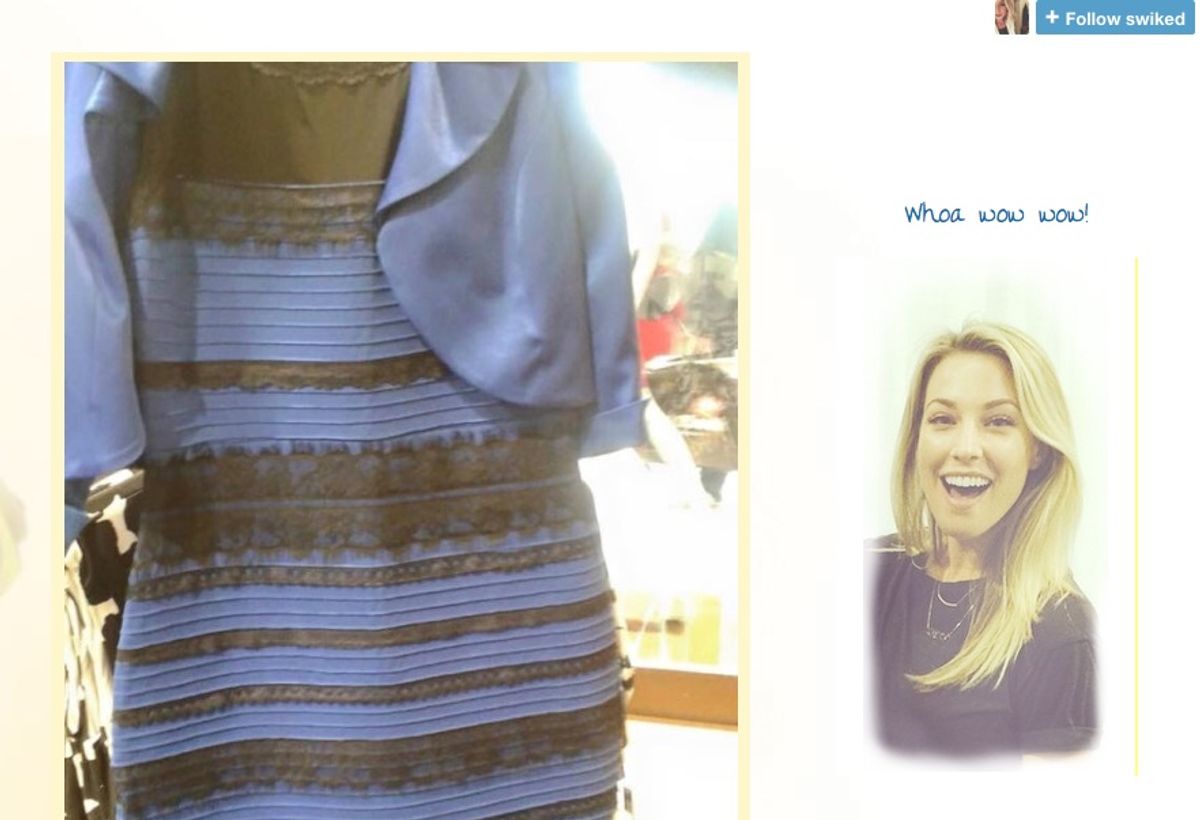 It all happened so quickly that now, those of us who lived through it can only look around in bewilderment at the havoc wreaked, the heated words exchanged, the relationships destroyed, the things seen that can never be unseen. And what we saw, world, was a goddamn blue and black dress.

For me, it started sometime after dinner Thursday night, when my teenaged daughter got a text from a classmate. She looked at her phone with curiosity, and then showed it to me and asked an innocent enough sounding question. "What color is this dress?" she asked, and I told her. Then she asked the same question to the other members of the family. And then, all was chaos. It was like one of those movies where there's a nuclear catastrophe in the first five minutes and the rest is just humanity turning on itself. Runaway llamas, you never stood a chance.

Surely no dress since Monica Lewinsky's famed little Gap number has so bitterly divided humanity. It was a photograph on the Tumblr of a user who goes by swiked of a two-toned dress with a bolero jacket, accompanied by the plea: "Guys please help me – is this dress white and gold, or blue and black? Me and my friends can't agree and we are freaking the f---k out."

In our home, we tried to settle a swiftly escalating internal dispute with a quick Google search -- and soon learned that the extent of the horror was greater than we could have imagined. On Twitter, Mindy Kaling and Julianne Moore and BJ Novak were disputing the color. Kim Kardashian was confessing, "I see white & gold. Kanye sees black & blue, who is color blind?" On Buzzfeed, 8,000 new articles, listicles and "What dress personality are you?" emerged.

Meanwhile, under our roof, the deeper we got into the discussion, the more divisive it became. At some point my spouse insanely started referring to the dress' "stripes," leading to a semantic dispute about what I thought were its lace embellishments. But no – he was talking about the shadows cast by the horizontal texturing in the BLUE part of the dress. After that point, around the time I said, "I don't even know who you are right now," things became so heated my older daughter exasperatedly declared, "That dress is tearing this family apart." It was worse than the epic, years-long and never settled battle over whether a tropical pastel shade of paint was blue or green. Blue, you are an endless source of controversy and misunderstanding.

And the fury didn't subside even after several news sources seemed to settle definitively that the dress is, LIKE I SAID, blue and black. Buzzfeed leapt to the rescue to announce, "We May Have Found The 'What Colors Are This?' Dress And It’s BLUE." Then the original woman behind the Tumblr post, 21-year-old singer Caitlin McNeill, told Business Insider that the dress – the blue and black dress -- had been worn by a friend's mother to a wedding. "What happened was two of my close friends were actually getting married and the mother of the bride took a photo of the dress to send to her daughter," she said. "When my friend showed the dress to her fiancé, they disagreed on the color." The bride posted it on Facebook, and the debate continued, until McNeill put it on Tumblr and things really got intense. The scientific reason for the perception dispute seems to have to do with how our retinas perceive light.

My mate, who happens to write fiction, said Thursday he found it fascinating that so many people can perceive the same photograph so differently. I, a nonfiction writer, argued that perception does not change objective, substantiated truth. There is no white and gold dress. The manufacturer doesn't make it. "But that's still what people see in the photograph," he argued. "Isn't that interesting?"

Some of us pay lip service to the notion that we all see the world from our own unique point of view. But that dress – that goddamn fugly dress – demonstrated it. So when the inevitable bored, too cool to play along types started grousing Thursday night about the frenzy, they were the ones not seeing things as they truly are, most of all. We can be looking with our functioning senses at the exact same image and describe it in terms that seem to have nothing to do with each other. No wonder it provoked such violent passions. It was the ultimate argument, and certainly the ultimate Internet one, so simple in its execution. Do you see what I see? And if you don't, which one of us is wrong?