America's student loan boycott: How 15 students took on the government -- and just may win

Saddled with predatory loans, students are striking and confronting Arne Duncan. Here's what it means for all of us 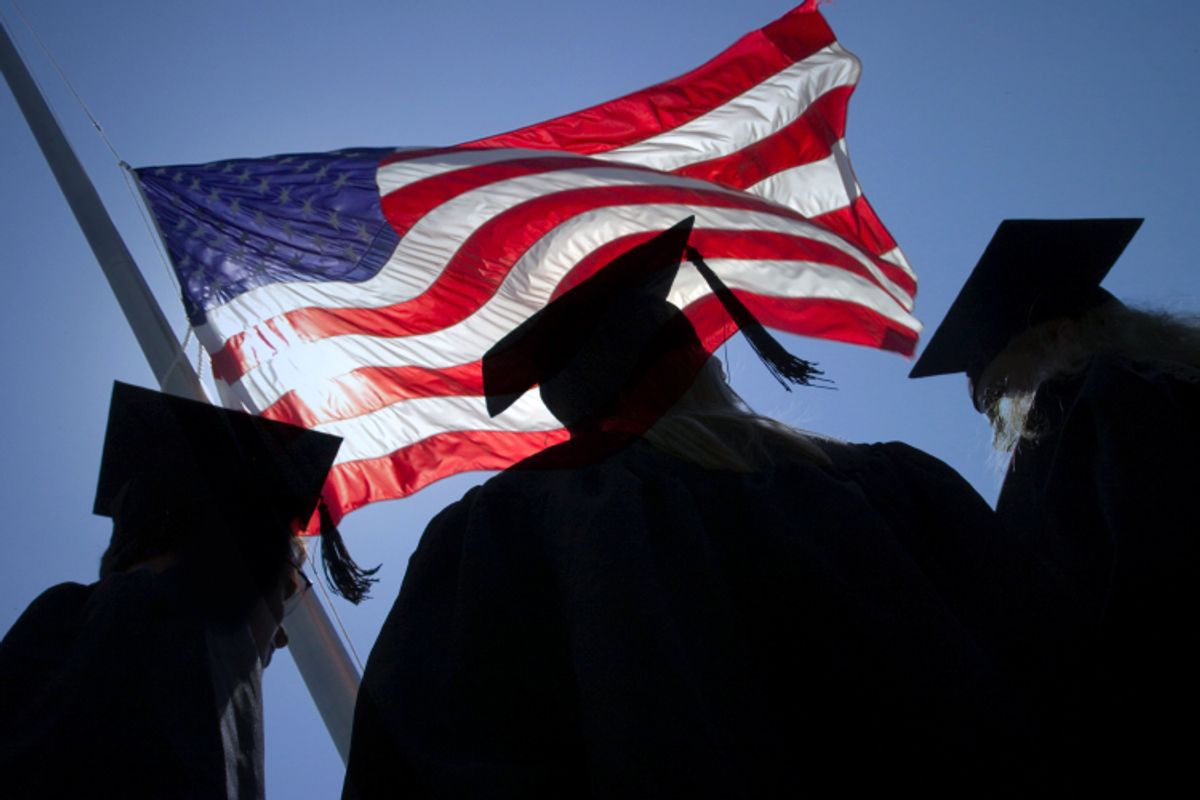 As you may have heard, 15 former students at the embattled for-profit Corinthian Colleges have gone on strike, refusing to make their student loan payments. The debtors and their allies want to raise awareness of the crushing burden of student loans, and the misguided way we finance higher education in America.

But less understood is that the debt strikers also have a very specific grievance, rooted in their college’s false promises and underhanded tactics. The Education Department is legally obligated – not at their discretion – to provide relief in such a situation. Beyond fighting a crooked for-profit college, the Corinthian 15 are taking on their own government as well. And their quest for accountability could reform an entire sector and improve conditions for all students.

Corinthian Colleges -- which ran Everest University, Heald College and other for-profit chains and at one point served 110,000 students -- were mostly a fraud factory. State and federal investigations and lawsuits allege that Corinthian lied to its own students and used illegal debt collection maneuvers to collect loan payments. The Consumer Financial Protection Bureau called Corinthian’s business a predatory lending scheme in its lawsuit last September, joining complaints out of California and Massachusetts.

Corinthian inflated job placement rates on marketing materials (including bribing employers to temporarily hire graduates to goose the numbers) and promised career counseling that amounted to sending around job links on Craigslist. It had a private loan program with interest rates over twice as high as the federal loan rate average, under which 60 percent of students defaulted within three years. Borrowers had to make payments while attending school, and Corinthian withheld diplomas and even pulled students out of class to demand cash.

The array of legal pressure on Corinthian forced the company out of business, in a deal brokered by the Education Department. They continued to advertise for new students while looking for a buyer, failed to inform prospective attendees of the investigations or the pending sale and dismissed student concerns when they brought up the subject. In November, ECMC, a company that makes most of its money as a federal debt collector on student loans and has no experience in teaching, bought 56 campuses from Corinthian for $24 million, in a deal greased by federal funds.

This federally administered bailout prevented 39,000 students from discharging their debts. Under the Higher Education Act (HEA) of 1965, students whose colleges shut down can apply for full debt forgiveness. And given the worthlessness of Corinthian programs and the high cost of the predatory loans, this sounds completely appropriate. Especially when the new owner of the colleges owes its existence to Education Department contracts and has a history of dubious student loan collection practices.

But according to students at the handful of schools shutting down, they were bullied into opting against a discharge and signing away their right to a refund. And instead of full debt relief, CFPB and the Education Department announced last month a partial forgiveness of $480 million of Corinthian’s private loans. CFPB estimates that this will cut loan balances on average by 40 percent, but most of these loans are in default and considered uncollectible; the true value of the debt is more like $8 million. The government and ECMC have not said how they arrived at the $480 million figure, or the full terms of the deal. This also only covers private student loans, not federal loans, which many Corinthian borrowers, including the Corinthian 15, took out. The deal also gets ECMC off the hook for Corinthian’s fraudulent practices, even though it bought the campuses and its liabilities. “ECMC bought amnesty from the federal consumer bureau using government money,” said Shahien Nasiripour of the Huffington Post in a story last month.

This is not only the cause of Occupy protesters. Thirteen Senate Democrats, including Elizabeth Warren, have repeatedly called for discharging the Corinthian loans. “The Department of Education is failing to do what Congress directed it to do,” the senators wrote in a letter last week. Massachusetts Attorney General Maura Healey has made the same demand for debt relief.

It’s really quite incredible. Students, the victims of a predatory lending scheme, are being told to basically pay for Corinthian’s violations of law. Their new college administrator carries the same reputation for bilking students as the old one. And they are being peddled the same false promises by the government, that their degrees will be worthwhile and their education valuable, that Corinthian made in the first place.

The idea behind the strike is to force this injustice into the open. The Debt Collective, the Occupy Wall Street offshoot that helped organize the Corinthian 15, is also providing “defense to repayment” legal help to strikers, using the HEA’s explicit clause on discharging debt. Legal services will also help contest debt collection and credit report hits. Defense to repayment has a thin legal history, and the battle will take years through the courts. But the increased pressure from students suing to discharge their loans could lead the Education Department to a reckoning.

Monica Potts, herself burdened by student loans, wrote about the Corinthian 15 for Talking Points Memo, and asks whether a debt strike would “trumpet the message that debt is wrong—or just that these people were wronged?” But there’s no reason that the latter cannot be used to amplify the former, that the specific cannot comment on the general. The Corinthian debacle is merely a worst-case version of an unjust plight more and more students face today. Mounting student debt has harmed the economy and produced generational barriers to higher education.

Weeding out the impossibly corrupt for-profit space is a first step to improving the entire landscape for higher ed; for-profit colleges account for almost half of all student defaults despite enrolling just 12 percent of all students. Clean that up with the threat of defense to repayment, and all colleges suddenly must recognize their responsibilities. Throwing a wrench in the burdensome student debt system can also hasten more practical steps to finance higher education, whether through a “pay it forward” income-based scheme or through making public colleges free.

And persistent activism against the Education Department is already making a difference. Last Friday, the agency fired five debt collectors accused of illegal practices, after years of tolerating their conduct. You can draw a straight line from the work of consumer advocates demanding an end to abusive debt collection treatment and the work of the Corinthian 15.

The fastest track to an overhaul of the student loan system begins with borrowers who pay high costs for worthless degrees to say “no.” The strikers are asking for something that has proven elusive in modern America: justice. And if the Education Department simply follows the law, they can get it.