A haunting portrait of upper-class decay (with raccoons) returns in a new restoration, and it's weirder than ever 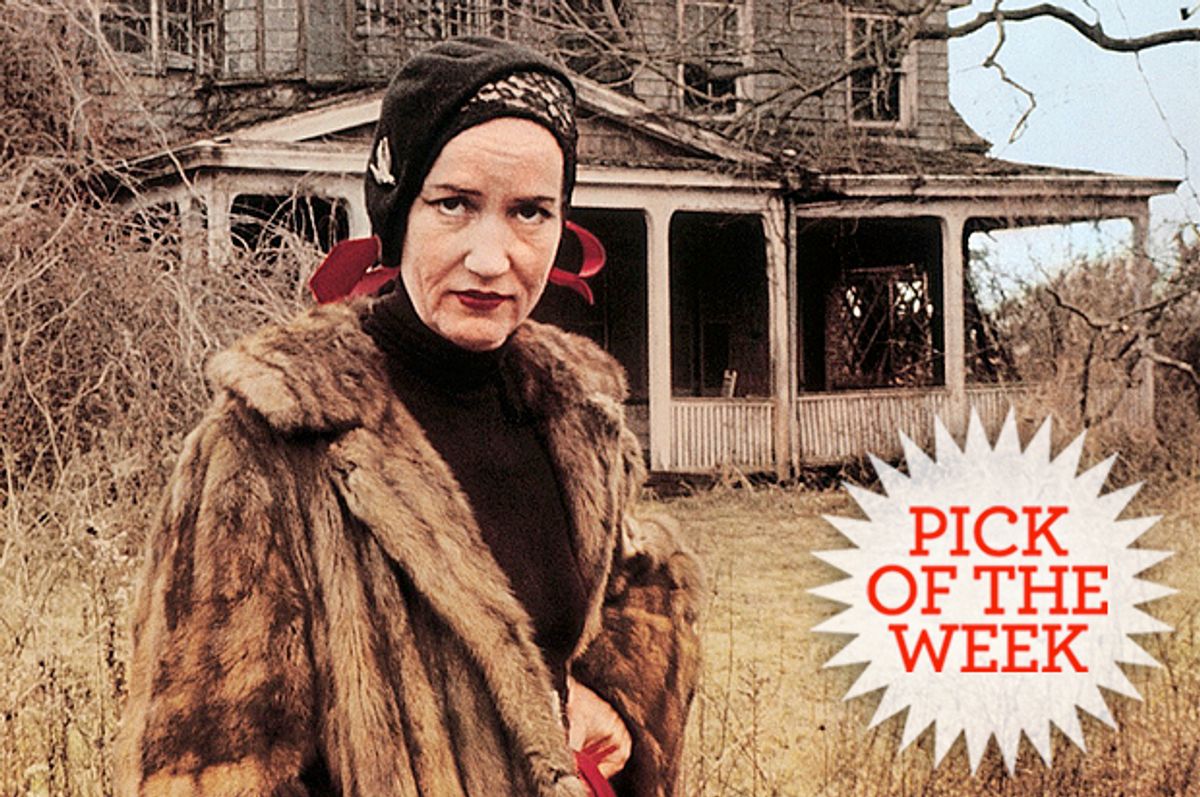 If you’ve never seen the Maysles brothers’ legendary 1975 documentary “Grey Gardens,” which returns to theaters this week in a gorgeous 40th-anniversary restoration (with home-video release to follow), you’re in for an otherworldly experience not quite like anything else in the history of cinema. If “Grey Gardens” doesn’t seem as distinctive now as it did four decades ago, that’s because it transformed the art and craft of documentary film – at least as much as Michael Moore would do later – and so many things made afterward have followed in its footsteps. But the world it captures, with its mother-daughter pair of aristocratic castoffs and their crumbling, weed-choked East Hampton mansion infested with cats and raccoons, is now so utterly vanished as to seem fantastic, an allegorical dream concocted by Scott Fitzgerald and Flannery O’Connor more than real people who existed within living memory.

As with so many moments of artistic revolution, the influence of “Grey Gardens” has been a double-edged sword. One could say, unkindly but not untruthfully, that this film pioneered the documentary as freak show, a window into bizarre, eccentric or unknown social worlds. But in this instance, at least, the filmmaking duo of Albert and David Maysles and their editors, Ellen Hovde and Muffie Meyer (who are credited as co-directors), transcended the limitations of voyeurism or ethnographic detachment. Although the Maysles brothers are usually described as practitioners of cinéma-vérité or “direct cinema,” they cheerfully violate that movement’s supposed rules in “Grey Gardens,” frequently conversing with their subjects, accepting drinks and (terrifying) hors d’oeuvres – I had forgotten about the existence of Sell’s liver paté, a tinned delicacy barely distinguishable from cat food that my own grandmother used to serve -- and occasionally appearing on camera.

The Maysles brothers could never have made the film without becoming friendly with the two Edith Bouvier Beales – now immortalized as “Little Edie” and “Big Edie” – the cousin and elderly aunt of Jackie Kennedy Onassis (respectively) who lived in incredible chaos and decrepitude amid the wealthiest beach town in North America. The filmmakers apparently discovered the Beale household while planning a documentary about Lee Radziwill, the sister of Jackie Onassis (which they promptly abandoned), and spent a year getting to know the two Edies before bringing their 16mm camera into the house. So “Grey Gardens” is not just a portrait of the unbelievable, “What Ever Happened to Baby Jane?”-grade madness they found there, but a tribute to that friendship. That sense of mutual trust and affection comes through in every frame and every scene, even when Little Edie swerves into paranoid delusions or the cats relieve themselves behind the framed portraits, and the film is funnier, better and richer for it.

With her endless array of headscarves, her peculiar, pantyhose-based fashion aesthetic and her old-school, upper-crust Manhattan drawl – an accent long since vanquished by television and the Ivy League – Little Edie is unquestionably the star of “Grey Gardens.” (The first name Marjorie comes out as “MAWJ-ree”; the subject she chose in college to please her estranged father, whom she always calls “Mr. Beale,” was “English lit-ra-CHOOR,” to go along with “Oriental philosophy.”) But it’s a tribute to the Maysles brothers both as filmmakers and human beings that she is a star, an unforgettable melodramatic heroine, rather than purely an object of pity or derision. When they meet her, Little Edie is already well beyond Blanche DuBois territory, a onetime bathing beauty in her 50s who is unmarried, lives with her mother and may suffer from untreated mental illness. She reads horoscopes with a magnifying glass (yearning for a “Libran husband”), performs a dance routine to a record of the VMI fight song, and nurses obscure decades-old grudges. She constantly complains about having abandoned her bustling city life in Manhattan to care for her mother (when it may well have been the other way around), assuring the Maysles that she would be happier in any New York rathole, “even on 10th Avenue.” If you pay attention it becomes clear that this traumatic move happened in 1952, or 23 years ago.

There’s no doubt that the Little Edie of “Grey Gardens” has inspired innumerable drag performances and self-deluded fictional characters, but I think that testifies to her enduring iconic power. (The real Edie Beale died in 2002, having left the Hamptons behind for Florida.) Of course we laugh at her when she feeds the raccoons in the attic or compares a feckless local handyman to Hawthorne’s “The Marble Faun” – a reference I have repeatedly tried and failed to comprehend -- but our laughter is just as much in the spirit of compassion, or wonder, as in mockery. Edie is a model of aphoristic composure amid total insanity and decay and ruination, a perversely magnificent figure whose disordered charisma remains potent. (I think her mother is correct that the handyman, perhaps 35 years younger than Little Edie, is smitten with her.) As Little Edie herself puts it, there is nothing more formidable than “a staunch woman – S-T-A-U-N-C-H … They don’t weaken, no matter what.”

Little Edie and Big Edie already seemed like relics in 1975, but the peculiar caste of American wealth they represented, and which had cast them out – the Northeast Corridor Catholic aristocracy that sought to out-WASP the WASPs on their home ground – was still dimly visible in the Kennedy family and its imitators. “I only cared about three things,” says Little Edie, “the Catholic Church, swimming and dancing, and I had to give them up.” That class has disappeared into the general swirl of white American money, and no one, regardless of their impressive family history, would now be permitted to live in such filth and squalor among the McMansions of the Hamptons.

From this distance, I think we can read a coded portrait of resistance beneath the phantasmagorical surface of “Grey Gardens,” and beneath Little Edie’s catechism of renunciation. She might have slapped you for calling her a feminist, while her earthier and more pragmatic mom might have liked it. Neither of them was cut out for the cushioned prison of upper-class marriage and motherhood, and by choice or out of necessity they turned their backs on that world and carved their own deeply strange paths. I kept wanting to tell Little Edie that you don’t actually need to feed raccoons; they do pretty well on their own, and it definitely won’t stop them from raiding your kitchen. But then it occurred to me that the point was not to resist or defer chaos, but to invite it.

“Grey Gardens” is now playing at Film Forum in New York. It opens March 20 in Washington and March 24 in Pittsburgh; plays March 27 only in Salt Lake City and April 1 only in San Francisco; opens April 3 in Vancouver, Canada; plays April 8 only in Winchester, Va., and April 10-11 only in Athens, Ohio; opens April 17 in Denver; plays April 22 only in Houston and Lubbock, Texas; opens April 24 in Jacksonville, Fla.; and opens May 1 in Los Angeles and Philadelphia, with more cities and home video to follow.