"Chappie": Meet the buzzkill robo-dork who might poison the "Alien" sequel 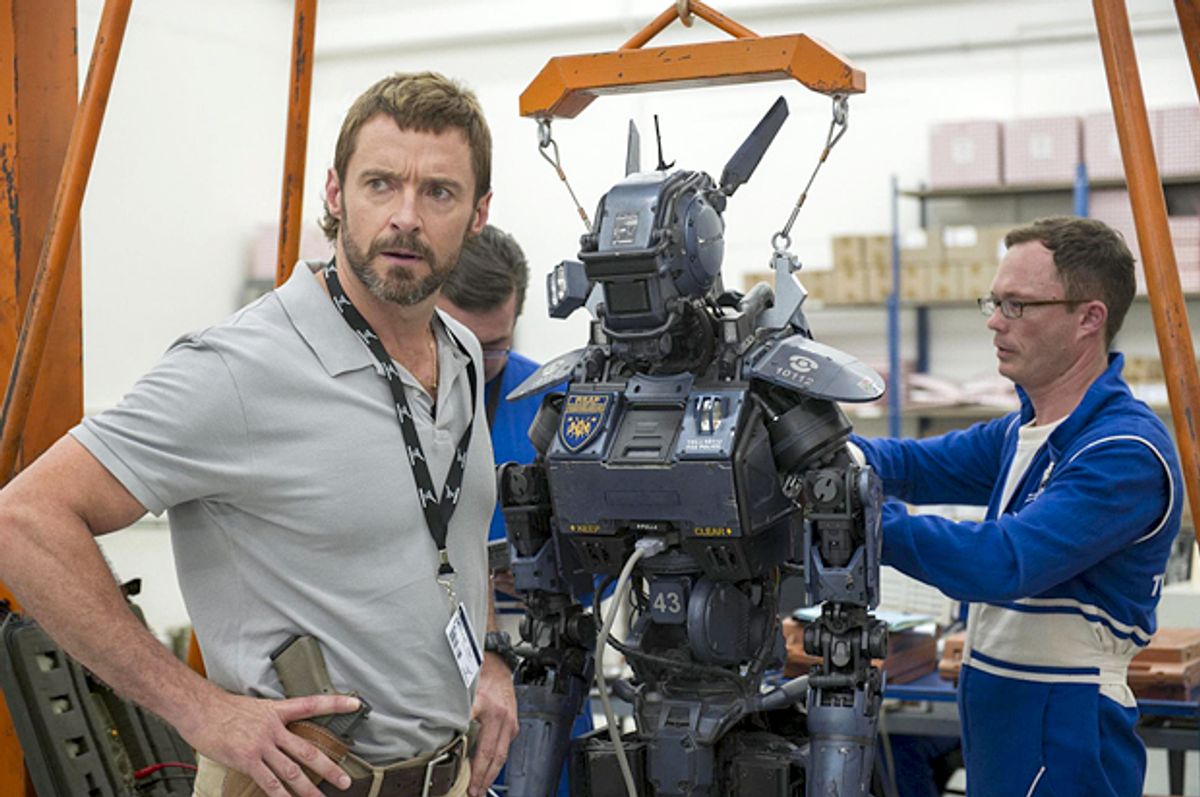 There’s been considerable excitement amid the science-fiction cohort around the prospect of Neill Blomkamp, the onetime Peter Jackson protégé and director of “District 9,” relaunching the “Alien” franchise with a new movie starring Sigourney Weaver (who is 65 years old but can definitely still bring the attitude). Rather than boring you with a sermon on how and why this was always likely to turn out badly, let’s move on to the evidence. Between his dynamite debut with “District 9” and now, Blomkamp made “Elysium” with Matt Damon, a movie from the Land of Intriguing Premises that so many high-concept Hollywood star vehicles cannot escape. (As in, “Well, it had an intriguing premise.”) I can dimly remember some scenes of futuristic mayhem that might be from “Elysium.” They might also be from the Tom Cruise movie “Oblivion” or the other Tom Cruise movie “Edge of Tomorrow” or any number of other things, some of which don’t have Tom Cruise. Maybe they’re all from “Jupiter Ascending,” which erased all those films and then erased itself.

Anyway, even if Blomkamp gets a pass on “Elysium,” that only raises the stakes on his new robo-action-comedy spectacle “Chappie.” Written by Blomkamp with his wife, Terri Tatchell, this movie returns to the crime-ridden, chaotic context of his native Johannesburg, which he exploited and transformed so brilliantly in “District 9.” It even features Sigourney Weaver, although in a small and forgettable role where she yells at people from behind a desk. It’s a near-future tale about a junked crime-fighting robot (voiced by Blomkamp’s frequent collaborator Sharlto Copley) who becomes the world’s first true artificial intelligence, and who then learns to wear loads of outrageous bling and speak in a ridiculous Afrikaans-American gangsta patois. And it’s the movie that might singlehandedly kill the buzz over the “Alien” reboot, if not kill off the project entirely.

It’s not just that “Chappie” is a mishmash of familiar ingredients whose story quickly slides off the rails into a swamp of action-movie clichés, or another misbegotten project from the Land of Intriguing Premises. It doesn’t have an intriguing premise in the first place. It’s cluttered, goofy and incoherent from beginning to end, and much too long. (Can we agree to hate the rule that science-fiction movies must run at least two full hours?) It gives me no pleasure to say this, but this movie is very often really, really stupid. Its attempts at comedy are embarrassingly weak and its attempts at sentimental humanism are insulting. “TRON: Legacy” was a better movie, with a purer spirit. “Jupiter Ascending” was much better. “John Carter,” the $300 million disaster that shook Disney to its foundations, looks like a masterpiece of imaginative cinema compared to “Chappie.” (Yes, I know: The problem with “John Carter” was not the movie itself but the commercial expectations.)

You almost can’t compare “Chappie” with Pixar’s “WALL-E” (directed by Andrew Stanton, the would-be Kubrick whose career was then incinerated by “John Carter”), which touches on similar themes but is a vastly more sophisticated, adventurous and, yes, grown-up motion picture. I was going to make a joke about “Chappie” being for people who find Pixar movies too slow, but that really isn’t fair. For all the manic enthusiasm and tribal loyalty of the sci-fi audience, even Blomkamp’s core believers will have a tough time circling the wagons around this one. It’s not the worst movie of the year, just a boring and inconsequential one that will soon be forgotten, and will add a second flat tire to a once-promising career.

It’s not like Blomkamp has forgotten how to direct action scenes or lost his feeling for atmosphere. It’s just that the subjective, ground-level action choreography he pioneered in “District 9” has now become ubiquitous – and that his feeling for atmosphere still seems to be defined by “Mad Max: Beyond Thunderdome.” (I hate to contemplate how many times Blomkamp watched that as a kid.) “Chappie” is a leaden and labored slog, the work of a guy who had one really good idea and used it up, and is now desperately trying to rediscover the magic. It mashes up several obvious science-fiction plots and scenarios, including “Frankenstein,” “RoboCop” and “A.I. Artificial Intelligence,” with some other borrowings that aren’t as obvious. Blomkamp and Tatchell have heavily ripped off the story of “Oliver Twist,” as implausible as that may sound: “Chappie” is the tale of an innocent raised amid a den of thieves, who is saved from the wages of sin by the self-sacrificing love of a surrogate mother.

All those competing themes and influences might not be a big problem if it felt like Blomkamp was in command of the pacing, the material or the characters. Instead we bounce around haphazardly for two full hours between a bunch of poorly worked-out story fragments. Dev Patel of “Slumdog Millionaire” plays an eager young robotics engineer at the evil corporation run by Weaver, who now believes he has cracked the artificial-intelligence code. Hugh Jackman (who, like Weaver, seems to have been on set for a day or two) is a thoroughly stereotypical ex-military meathead villain. Then there’s the supposedly hilarious trio of low-grade thugs played by the members of South African hip-hop group Die Antwoord, which comes under the heading of “must have seemed like a good idea at the time.” In fairness, the preening, moronic swagger of rapper Ninja is more fun to watch, in a reality-TV vein, than anything else in “Chappie,” but how much acting is involved in his performance I really couldn’t say.

I can appreciate that there are some in-jokes at work here in a John Carpenter vein, including the appeal to Die Antwoord fans and the unanimously terrible haircuts sported by the painfully dumb South African white dudes. But the plot, in which the newborn Chappie is abducted and trained by criminals, and then targeted for assassination by Jackman’s killer robot (which looks exactly like the bad robots in the “RoboCop” remake), is just a recycled afterthought, semi-concealed by bits of fake news broadcast featuring the real Anderson Cooper. Seriously, that particular gambit – pimping out “real” TV talking heads to legitimize apocalypse movies – stopped being startling in 1997. As far as who is good and who’s evil, who will be redeemed and who punished, I refer you back to Dickens.

As for Chappie himself, a mechanical newborn with a puppyish eagerness to please and wiggly electronic ears to match – oh dear. He never feels like the movie’s centerpiece and isn’t even in the movie that much, maybe because he’s a lame sketch-comedy concept rather than a character: Let’s have Sharlto Copley mangle some obscenities in a dorky robot voice! (Once you’ve heard somebody mix up the syllables of the word “motherfucker,” it’s just not as funny the second time, or the fifth.) I kept hoping Chappie would get crushed into scrap metal so I wouldn’t be subjected to his supposedly adorable malapropisms anymore, but no such luck. Like this entire movie, Chappie is an idea vaguely sketched out on a napkin, which led the geniuses of Hollywood to open their pocketbooks and then went nowhere. It’s OK, I guess, that Blomkamp wanted to make a lightweight entertainment that bounces off heavy-duty questions of crime and poverty and artificial intelligence and the nature of consciousness without taking any of them seriously. (We can set aside the discussion of his confused political perspective, since it really doesn’t matter.) But what he came back with just isn’t any fun.