Selma's white supremacy legacy: What America must reckon with today 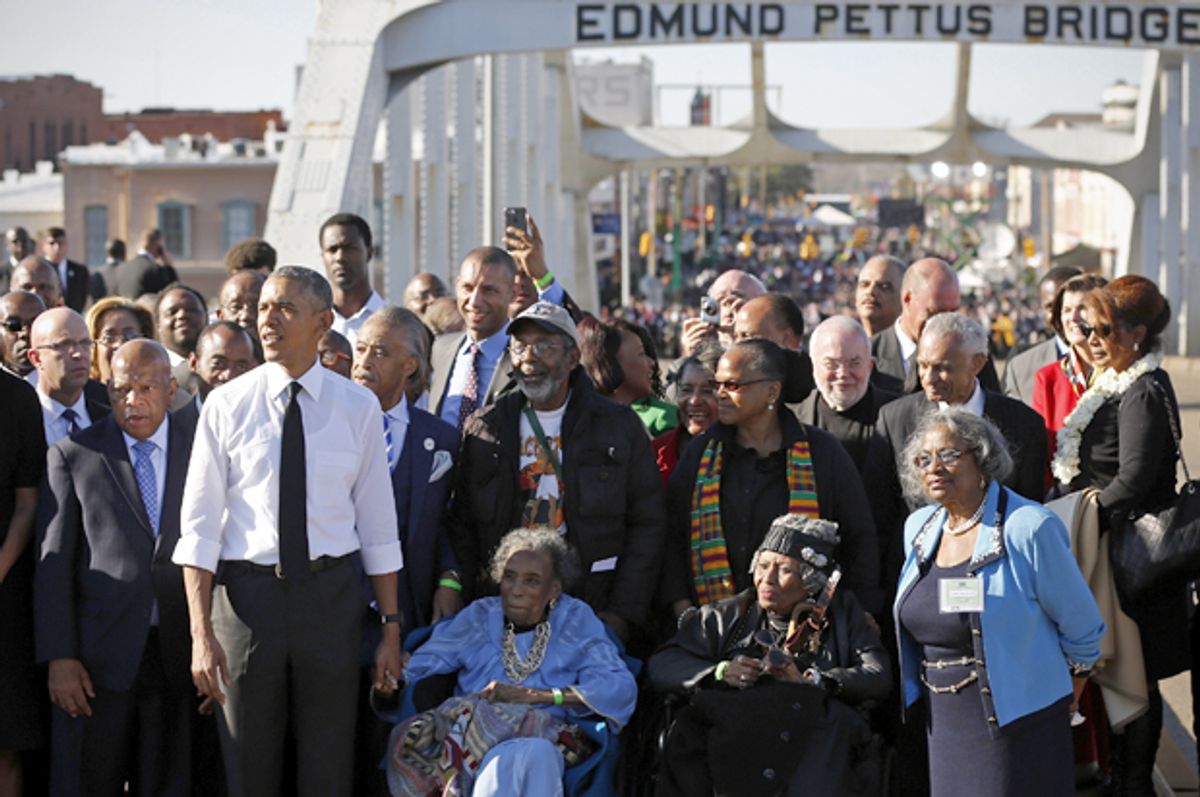 While this weekend America paused to commemorate the 50th anniversary of “Bloody Sunday,” where civil rights protesters and Alabama police confronted each other at the Edmund Pettus Bridge in Selma Alabama, we should not forget that an all-white police force was protecting the established racial order dictated by the idea of white supremacy. In order to put in perspective the progress made as well as the current challenges around the question of race, we have to interrogate and confront the idea of white supremacy.

As George Santayana reminded us, “Those who cannot learn from history are condemned to repeat it.”

The belief that whites are inherently superior to other races and therefore should dominate society is as American as apple pie. It is an idea that has caused much pain and suffering in the world, is an artifact of “white culture,” but still plays a role in American society.

White supremacy is also a relatively recent phenomenon in world history. George M. Fredrickson, in his study, Racism: A Short History, observes that, “the notion that there was a single pan-European or “white” race was slow to develop and did not crystallize until the eighteenth century. Direct encounters with Africans had of course made Europeans aware of their own light pigmentation, but in other contexts whiteness, as opposed to national and religious affiliations, was not a conscious identity or seen as a source of specific traits.”

Speculation by European intellectuals and scientists during the eighteenth-century that white people were superior to the darker people of the world laid the foundation for a justification for European colonization, and African enslavement. These justifications, based on biological determinism and theories about human evolutionary development, contended that the human races were separate species and had permanent and unequal capacities. These racist ideas permeated Europe despite the Christian teachings at the time of the unity of all mankind, as well as democratic ideas emerging from the Age of Enlightenment, which declared that all men are endowed with individual rights derived from nature.

Thomas Jefferson in his Notes on Virginia in 1781 made it clear that he thought that blacks were inherently inferior to whites. While Thomas Jefferson is revered in American history, his racist musings provided his fellow slave holders with a rationale for slavery.

Accordingly, defenders of slavery in the American South, in the face of demands by abolitionist for emancipation, advanced theories that made black servitude natural and unavoidable. They argued that Africans were less than human and this provided a rationale for their domination and enslavement, as well as for unremitting violence and brutality in order to maintain systemic slavery. We now know that the zeal for enslaving Africans was more about creating a supply of labor in order to exploit the land for economic gain rather than debates about ethno-anthropology.

According to recent books by Edward Baptist, The Half Has Never Been Told: Slavery and the Making of American Capitalism, and Steven Beckert, Empire of Cotton: A Global History, the system of capitalistic exploitation of cotton led to the development of unparalleled American wealth, and catalyzed the nineteenth- century industrial revolution in Europe.  It is clear from both of these studies that America would not have developed as quickly on the world stage as a major economy without the driver of the cotton economy. Essential to this development was the black slave system of labor, located primarily in the American South, but capitalized by financiers in the North and Great Britain.

An additional and important aspect of white supremacist ideology, which acted to bind the white community together, was the idea and practice of “white skin privilege,” that advantaged all whites regardless of class. The fact that this empowerment trumped class is an explanation of why thousands of working class whites, who did not own slaves, gave their lives in the defense of slavery during the Civil War.  W.E.B. Du Bois called the compensation to working class whites a “psychological wage.”  This phenomenon is now incorporated into American conservative politics, which depends on working class whites to ignore their economic interest, and act in solidarity with white elites.

Theories about African’s lack of humanness, during slavery or after, did not hinder sexual relations between the dominant white males and African women. However, the children of these liaisons created a problem for the guardians of ethnic purity.  All slave cultures, whether in South Africa or the Caribbean, had to deal with the advent of mixed descendants. However, the classification of all descendants of these mixed unions in the United States, as “black,” created a “unique descent rule.” In the minds of many whites of that era, miscegenation, if unchecked, could lead to the diminution of white racial stock and black dominance.  This fear, or unintended consequence of white supremacist ideology, fueled many of the anti-miscegenation laws during the Jim Crow era, and contributed to much of the terrorism, particularly the lynching of black males following Reconstruction. Our current problems of police violence toward black males stems, in part, from the inheritance and internalization of these fears in the white community.

The American eugenic movement, around the turn of the twentieth-century, sought to shore up the belief of white supremacy through the new science of genetics, selective breeding and intelligence testing. While the eugenics movement supported strict immigration laws, anti-miscegenation legislation, and forcible sterilization of the poor and disabled, an important goal was to create a scientific basis for white supremacy.  The corresponding eugenics movement in Germany during the 1930s and 1940s provided the ideological justification for the persecution of the Jews. Once the horrors of the Holocaust were fully exposed, support for the eugenic movement in the United States diminished.

One of the more highly publicized attempts to scientifically study and quantify black inferiority was the 1994 publication of the Bell Curve: Intelligence and Class Structure in American Life by Richard J. Herrnstein and Charles Murray. The authors argued that racial differences found in intelligence testing were genetic. This sort of scientific racism has been exposed, and was roundly criticized by the American scientific community.  While there is clearly a genetic component to human intelligence, the relative contributions of nature versus nurture is still being debated. If we consider that African Americans have not been “nurtured “ in America since its founding, as compared to whites , then we have a rationale for differences in test scores without ever having to evoke an imaginary genetic difference.

On June 26, 2000, President Bill Clinton, announced the completion of the sequencing of the human genome, and observed that, “one of the great truths to emerge from this triumphant expedition inside the human genome is that in genetic terms, all human beings, regardless of race, are more than 99.9 percent the same.” Although there are subtle differences, we now have evidence of the basic unity of humankind.  Centuries of pain and suffering based on the belief that human beings were defined by racial groupings is now relegated to the dust bin of history along with other beliefs such as the earth is flat.

Now that biology has been delegitimized as an explanation for significant racial differences, "black culture" has become the target for those looking for inherent deficits as an explanation for continuing inequality and disparities. Blaming the victims is not persuasive in the face of historical and continuing racism and discrimination. However, despite the success of many individuals of color, a majority of African Americans continue to suffer in America. Yet, the manifestations of this suffering does not call for contempt, but profound empathy and understanding.

Alarmingly, white supremacy ideology has been replaced by more subtle forms of racism that continues to bedevil American society. Edwardo Bonilla-Silva has outlined this phenomena in his critical race study, Racism without Racist: Color-Blind Racism and the Persistence of Racial Inequality in America.

He argues that the “mechanisms and practices associated with this new order are subtle, institutionalized, and seemingly nonracial, which helps whites to justify contemporary racial inequality.”

While white supremacy for the most part has been discredited as an idea in American discourse and culture, it remains a potent force among certain groups on the radical right wing of American society. It is unlikely that these ideas will gain traction among the majority of whites in the future; however, it is important for the well-being of our society that we dispel the idea of innate black inferiority, and begin to unburden many whites, particularly the young, from the myth of white supremacy and the twin psychoses of racism and color prejudice.