America is literally on fire: How out-of-control oil spills are destroying our population centers

Disasters are raging with such force and regularity that firefighters have to give up. Welcome to the new reality 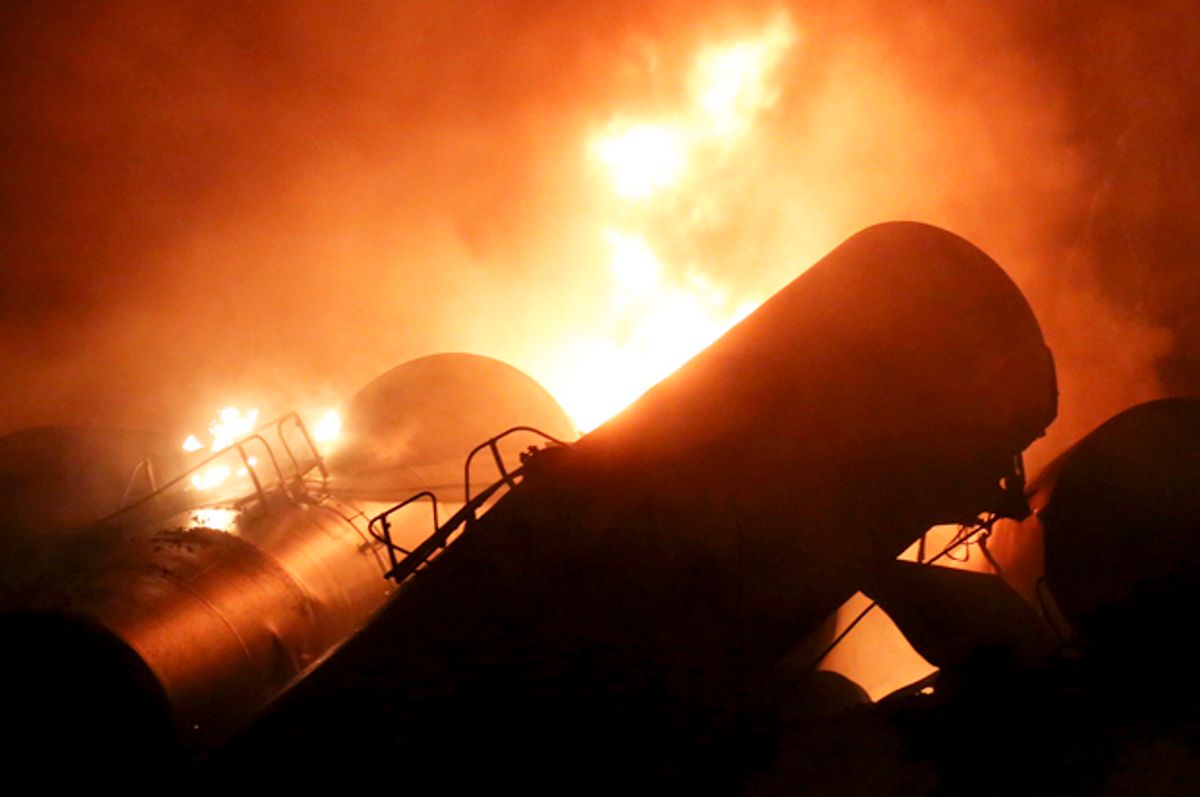 It’s a good bet that someplace in North America is on fire right now, raging so out of control that officials have to let it burn itself out. And it happened because highly flammable oil was placed on a train for shipping, and something went drastically wrong. Because so much oil is transported by rail these days, the probabilities of catastrophe have elevated significantly. We haven’t ruined a major population center yet only through dumb luck; and we haven’t cracked down on this treacherous practice only because of the enormous power of the industry.

Last Thursday, 21 oil tanker cars derailed near Galena, Illinois, and five of them burned for three days. Firefighters gave up combating it because of the intensity of the heat. Tanks tumbled into a bank along the Mississippi River, threatening the Upper Mississippi National Wildlife and Fish Refuge. The EPA said the fire posed an “imminent and substantial danger” to the river. On Saturday, another train caught fire near Gogama, Ontario, damaging a bridge and sending five tank cars into the water. A similar train fire occurred on Feb. 14 near the Ontario town of Timmis, and on Feb. 16 in the almost perfectly named town of Mount Carbon, West Virginia. In all, over the past five weeks there have been five crude oil train derailments, threatening ecosystems and human health. You can follow all the “action” at the DOT-111 Reader.

The industry estimates that 9,500 carloads of oil moved along rail lines in 2008. In 2014 that number jumped to 500,000 carloads, transporting 15 billion gallons of crude. By some estimates that could double this year. Moreover, harder-to-reach oil, from the Bakken shale of North Dakota to the tar sands of Alberta, Canada, is more flammable and explosive, igniting at much lower temperatures, according to U.S. regulators.

The exponential increase of shipping more dangerous product just magnifies the risk. These trains – or bombs on wheels, if you prefer – pass through big cities like Philadelphia, Seattle, Newark and Chicago. A derailment in a big city would be very destructive; when the relatively tiny town of Lac-Mégantic, Quebec (population 5,932), suffered a runaway train explosion in its downtown in 2013, 47 people died and $1.2 billion in property was damaged, making it the worst train disaster in Canada since 1864. So continuing to run these trains through major cities is like lighting a fuse to dynamite.

Oil companies pledged a commitment to safety by improving the quality of the tank cars, replacing thin-skinned DOT-111 cars with a new model called CPC-1232. But that hasn’t mattered a bit; the Galena derailment involved these allegedly safer CPC-1232s, as have several other recent tragedies.

Those who respond to oil train derailments by claiming that the Keystone XL pipeline would solve the problem neglect the fact that a pipeline would not be able to carry even half of what flows from the Bakken region. More important, because of the collapse in oil prices, new infrastructure like a pipeline has ceased to make economic sense, relative to the existing infrastructure of transporting by rail.

Perhaps the scariest part of all of this is the perilous financial state of the oil industry today, which if anything will increase the danger. Energy companies are rapidly going bankrupt, as they cannot service debt with lower oil revenue. Companies on the edge will have to cut costs to keep afloat, and when costs are at issue, traditionally safety goes out the window.

What can be done about these massive explosions-in-waiting currently traipsing around the country? The Department of Transportation did propose new rules last July, to phase out the old DOT-111 cars, increase speed limit requirements and improve brakes. They plan to finalize those rules in May, after missing an initial deadline. But DoT’s proposal did not include a rule that oil companies remove explosive gases, including excess natural gas, from their shipments. A state version of that rule in North Dakota is supposed to take effect April 1.

According to a report in Reuters, the White House considered a provision to remove these volatile gases (known in the industry as “light ends”), but ultimately punted, letting North Dakota rules govern. Federal officials were concerned about their jurisdiction to dictate treatment of light ends. But critics believe the federal government relying on North Dakota – a conservative state not exactly known for its strict adherence to regulations – increases the risk of shipping oil by rail. That’s especially concerning when you consider that the trains travel all across the country, and that some Bakken shale comes from neighboring states like Montana. For their part, the White House denied they held off on improving oil train safety.

Sen. Chuck Schumer urged federal regulators to mandate the removal of light ends from crude oil in a letter last week, and Dick Durbin, whose state was charred by the Galena disaster, called for strengthening tank cars. There are indications that the Galena tank cars, though the stronger CPC-1232, were “unjacketed,” without insulated steel shells.

The DoT regulations will finally emerge from the Office of Management and Budget’s internal process in May. Officials at the Office of Information and Regulatory Affairs, which analyzes federal regulations for OMB, held at least 10 meetings with the oil and rail industries last spring, after initially receiving the rules. That includes meetings with the biggest oil-by-rail company, BNSF, a division of Warren Buffett’s Berkshire Hathaway. Basically, the oil companies point to track maintenance, and the rail companies point to inadequate tank cars. Whatever doesn’t cost them money is what they blame.

Increased domestic oil production is always depicted as an unalloyed good, with no discussion of the costs, like turning trains into bombs nationwide. There’s reason to believe that no tank car is safe enough to carry something this volatile, and that the risks exceed what the public should reasonably bear. DoT has nonchalantly predicted 10 derailments a year on oil trains, with billions in damages. If anything that’s an underestimate.

One reason the planet continues to boil is that oil companies have been allowed to externalize their costs onto government. Oil appears “cheaper” than solar or wind, because these costs never come into account. But solar power doesn’t blow up while being carried through a major city on a train. And if we want to seriously talk about what kind of energy we can afford in the future, that has to enter the conversation.