Ignore the haters: One of the Bard's least-loved plays becomes a bloody, no-budget biker movie -- and it's awesome 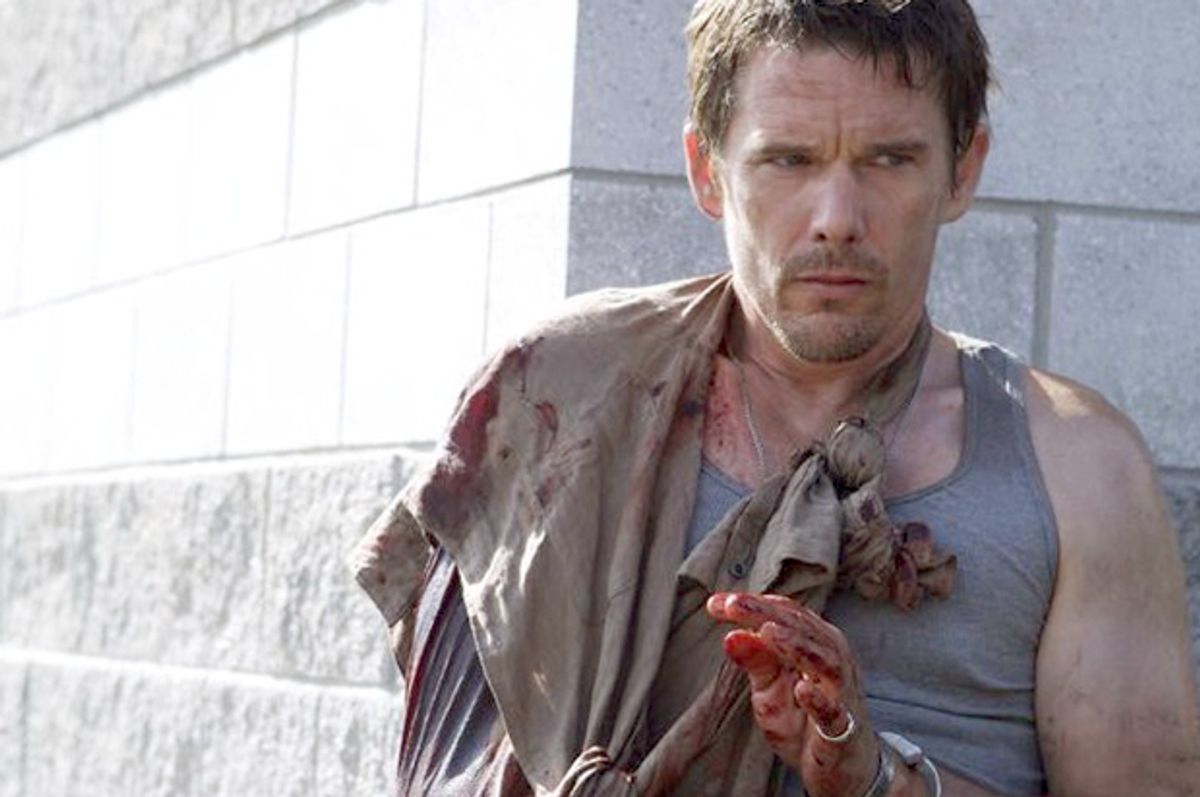 “Every good servant does not all commands,” muses Posthumus, the tormented young British warrior in Shakespeare’s “Cymbeline,” played by Penn Badgley in Michael Almereyda’s eccentric but addictive zero-budget, gang-war adaptation. He means that the best way to follow the orders of a lord or king is to follow your own conscience instead – “No bond but to do just ones” – which gets at the heart of what this tangled and unloved play is about. These are core Shakespearean questions, to be sure: How do we decide what is true morality, and what is social convention? Whom do we trust? And how do we make amends when we have done wrong? I don’t know if I’m supposed to issue a spoiler alert for a play first performed in 1611, but Posthumus – who thinks he is a cuckold, a wife-killer and a traitor, and is going into battle in search of death -- doesn’t know yet that his loyal servant Pisanio (John Leguizamo) has followed this advice to the letter.

It’s easy to beat up on Almereyda’s restaging of “Cymbeline,” a work nominally set in Roman Britain around the time of Christ, as a cheaply made gangland drama with motorcycle jackets, pickup trucks, iPads and automatic weapons. There’s no question it demands considerable suspension of disbelief. There was an unfortunate critical pile-on after the film’s premiere at Venice last fall, and even with a crackling cast that also includes Ed Harris as the hotheaded King Cymbeline, Ethan Hawke as the duplicitous Iachimo, Dakota Johnson as the wronged princess Imogen and Milla Jovovich as her diabolical stepmother, this is a tiny release with minimal box-office prospects. But there’s a certain conceptual purity to this film – the purity of exploitation cinema and community theater, swirled into a strange combo – that leaves me indisposed to mockery. If John Carpenter had ever done a Shakespeare film, this might be it. Almereyda, a veteran indie warrior who has never chosen the easy road, made me feel the moral passion and emotional risk beneath the surface of a play that is often considered a failure.

To say that “Cymbeline” is unusual among Shakespeare’s plays is putting it mildly. A tangled tale of war and family intrigue loosely based on legends about the real-life Celtic king known as Cunobeline or Cynfelyn, it bears even less relationship to actual history than most of the Bard’s so-called history plays. It was originally classified as a tragedy and now usually considered one of Shakespeare’s “late romances,” but “Cymbeline” borrows so many devices from the earlier comedies that Harold Bloom floated the thesis that it should be read as self-parody. There’s a woman who conceals herself by dressing as a boy, a woman whose virtue is cast into doubt (unjustly, of course) and a woman considered dead who isn’t – and all the same woman, at that. A pair of rustic teenagers turn out to be lost princes, a father’s ghost shows up with timely advice and there’s a magic poison that simulates death and an entirely literal deus ex machina, when the god Jupiter shows up in person. (Thankfully, Almereyda has cut that out.)

So, yeah, it’s a mash-up, and kind of a mess. A few Shakespeare plays are performed less often -- “Timon of Athens” and “Pericles” come to mind – and some of his earlier and more conventional comedies are clearly inferior on literary and dramatic grounds. But “Cymbeline” has a unique reputation for badness stretching back to Samuel Johnson, who castigated it for “the folly of the fiction, the absurdity of the conduct, the confusion of the names and manners of different times, and the impossibility of the events in any system of life.” Some scholars have suggested that Shakespeare wrote it in collaboration with someone else, or plagiarized bits from the strikingly similar tragicomedy “Philaster,” produced by the same company around the same time. (If only BuzzFeed had existed in the 17th century!)

Some of the haters, when it comes to Almereyda’s “Cymbeline,” appear to wish he had turned the play into something it isn’t, by straightening out its melodramatic and almost incomprehensible switchbacks or updating its antiquated gender politics, its conceptions of honor and tribal loyalty, and so on. I would say he has done precisely the opposite: By staging “Cymbeline” in the world of low-budget crime movies, as a conflict between a renegade Brooklyn biker gang (the Britons) and a corrupt police force (the Romans), Almereyda embraces those elements of folly and absurdity and confusion that Dr. Johnson bewailed – the play’s essential artifice, in a word -- and tries to burrow beneath them for another kind of truth. It’s legitimate not to like this movie or to view it as a failure, of course. (There is a discouraging amount of explanation before the story even starts.) But to read it as a misguided attempt at realism is completely wrong.

Although Almereyda’s screenplay streamlines several plot events, turns soliloquy into narration and cuts out huge chunks of text (the movie runs about 100 minutes), the words are mostly Shakespeare’s and the characters entirely so. Posthumus is still a vain and self-involved young man, far too easily deceived by the villainous Iachimo (played by Hawke as a rival two-bit gangster with a Mustang convertible) when it comes to the fidelity of his beloved wife Imogen. In classic Shakespeare-heroine fashion, Imogen collapses into suicidal despair once wrongfully accused. Cymbeline, a ruthless and charismatic Tony Soprano type, is similarly hornswoggled by his beautiful younger wife (Jovovich), who is obviously up to no good, all without even realizing how far he has fallen under her sway.

But all the actors in this immensely rich cast, which is outstanding down to the small supporting roles (Vondie Curtis-Hall as a Roman commander/cop, Peter Gerety as the doctor with a secret, Delroy Lindo as an exiled former lieutenant of Cymbeline) sell the hell out of these characters and their implausible emotional roller-coaster rides. Ed Harris, now long past his moment of Hollywood stardom, remains one of the greatest living American actors, and I can’t imagine anyone else doing better at discovering the changeable spirit of this feckless king. To the extent that Shakespeare’s play conveys some sense of the ancient Britons, he sees them as vengeful, violent men ruled by cruel passion – almost exactly as we see gangsters in old-fashioned crime dramas. That’s what Almereyda is getting at here. If this willfully peculiar and daring “Cymbeline” isn’t to all tastes, it brings back the blood, the thrills and the sense of moral discovery to a long-neglected work.