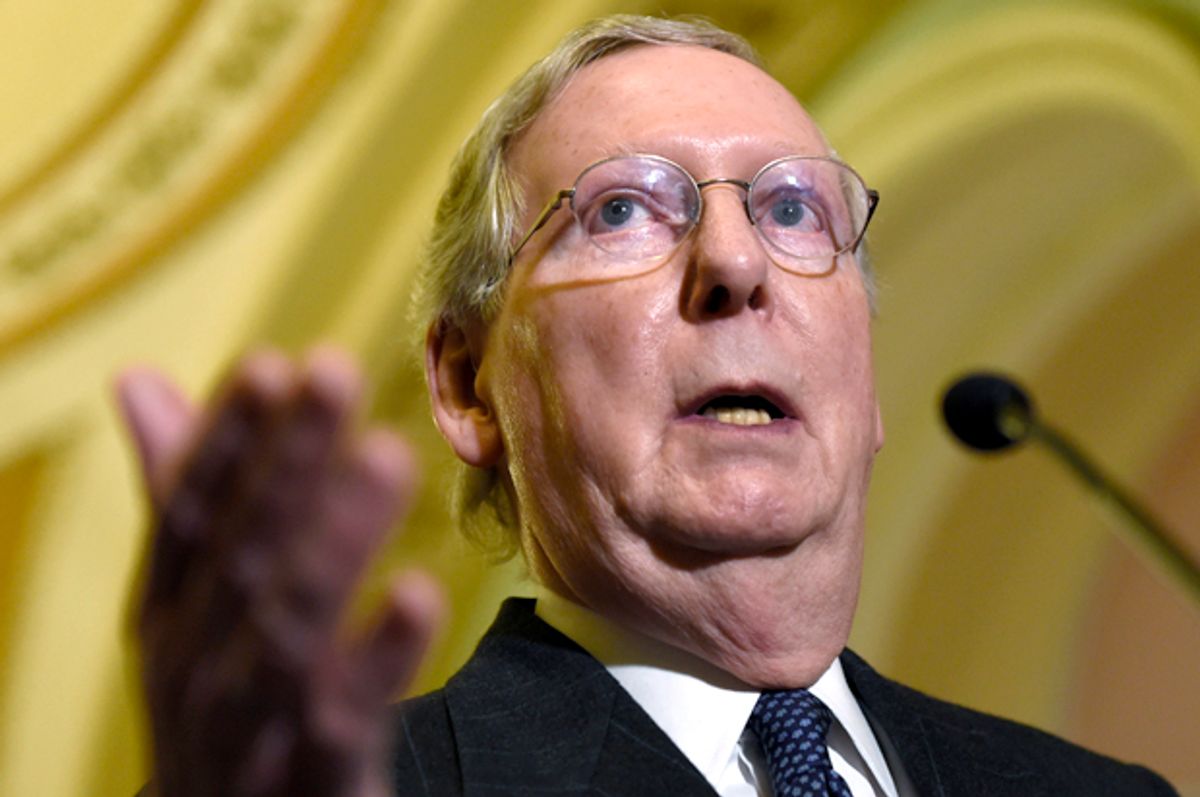 Because conservatives are so fearful of aligning themselves with anything that might actually be mistaken as merciful -- lest they alienate their constituents -- a bipartisan bill aimed at combating human trafficking found itself suddenly derailed earlier this week. Let me repeat that – it's a measure to fight slavery, a concept most of us living in this country in this century oppose. You can probably figure out by now what the controversial sticking point is. Yup, this is about abortion. In an upheaval that demonstrates yet again why you should always read the fine print, Senate Democrats Justice for Victims of Human Trafficking Act went into overdrive Tuesday over a recently-added Hyde Amendment-inspired provision that would restrict federal funding for abortion, as well as other health care services.

The original bill, introduced by Texas Republican Senator John Cornyn, strengthens law enforcement resources for human trafficking cases and establishes a fund for victims, to be paid out from fines and penalties reaped from perpetrators. Speaking just Tuesday morning, Majority Leader Mitch McConnell said, "This legislation is vital. So I hope now that it has been brought to the floor, that this bill continues to enjoy its strong record of constructive bipartisan support. These victims need a voice. They need justice. And the new Congress is determined to give them both. ... I look forward to the Senate's good work to pass it."

But then, as Democrats began to the provision in a bill they just the day before had agreed to begin debate on it, things got intense. Sen. Patty Murray observed, "The Republicans are trying to pull a fast one here on human trafficking bill, but it is absolutely wrong and honestly it is shameful." And Sen. Chuck Schumer asserted, "A list was sent to certain members saying, 'here are the changes from last year.' This provision was not listed among them." But Sen. Cornyn noted that the revised version has been available since January, saying, "This idea that there has been some sort of ambush is just preposterous. That we surprised them by including this restriction on taxpayer-funded abortion that's been the law of the land for 39 years is patently ridiculous." As Steve Benen explained on MSNBC, "As this year’s process got underway, GOP senators provided Dems with a list of minor alterations to the bill’s language. The anti-abortion measure wasn’t on the list, and Democrats moved forward, taking Republicans at their word." Lesson learned, right?

There's no getting around the fact that the Senate Democrats dropped the ball in noticing this – they should have been all over this weeks ago. Yet the Republican invocation of the Hyde Amendment as grounds for slipping in the abortion provision is sketchy as hell. The Hyde Amendment, which denies Medicaid funding for abortion, does still provide exceptions, including if the woman's life is endangered, or she is the victim of rape or incest. So let me ask, is there any scenario in which a person who has endured human trafficking does not qualify as a victim of rape? And Adam Jentleson, a spokesman for Minority Leader Harry Reid's office, noted this week that because the language of this bill applies to criminal fines and not taxpayer money, if passed as is it "could lead to a dramatic expansion of abortion restrictions in future years." Imagine that. Now unless Republicans can be convinced to back off, what started as a bipartisan effort to fight a heinous and prevalent crime could instead be used as a means to restrict access to reproductive choice for women who've been crime victims.