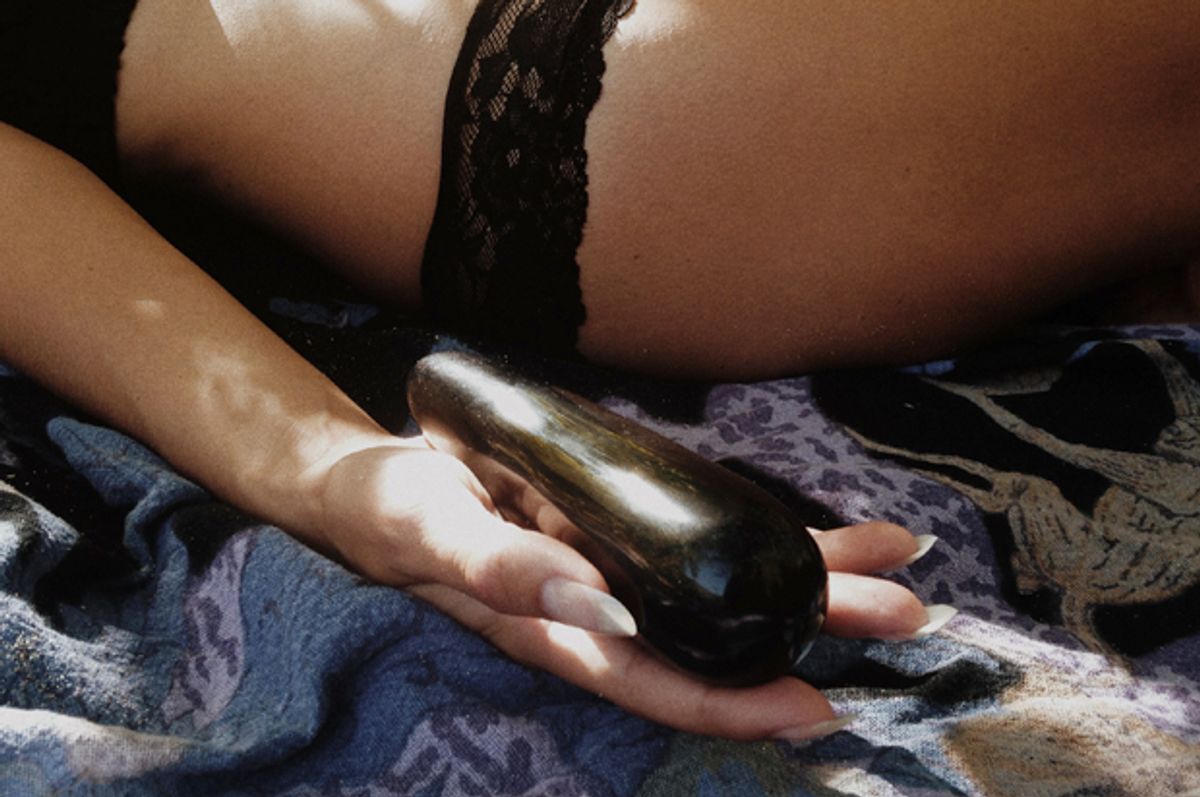 I have to admit: I don’t buy into the whole crystal thing. I certainly have my new age-y tendencies — I did live in Austin, Texas, for several years, after all — but faith in the power of crystals (or anything vaguely supernatural, really) has always eluded me. I tend to rely more on what science has to say about the natural world than anything else, and the research behind crystals’ purported healing abilities is iffy, to say the least. As far as medical studies are concerned, there’s no evidence that crystals can clear diseases or other physical ailments.

But we’re all afforded faith and free will, so it’s difficult to see the harm in indulging in some crystal healing when one isn’t doing anything extreme or putting her or his health at risk. What if, instead, someone is aiming for a different sort of “healing” power — such as the kind where 15 minutes alone, a MacBook and a crystal (or any vaguely cylindrical object devoid of sharp edges, really) might be useful?

Turns out, whether you’re at all mystical or just looking for a nice new way to get off, crystals might be able to provide a bit of sexual healing — even if it’s just in the form of good ol’ basic genital stimulation. And a woman named Vanessa Cuccia has made it her business to prove it.

But she also made something she believes in, which she understands won’t be the case for everyone who buys a Chakrub. For those who have faith in crystal healing, the Indian Jade Chakrub might seem like the perfect tool for enhancing domestic harmony between dueling spouses; for others who don’t, it could just be a sex toy they’re comfortable leaving on the nightstand instead of hiding in the top drawer. Regardless of what a Chakrub owner believes, the toys can still lead to plenty of orgasms.

“I really like it,” a friend told me of her recently purchased Indigo Chakrub. “I don’t think it does shit for my chakra, but do I even really know what a chakra is? No. But I love it.”

Salon caught up with Cuccia last month to talk about her inspiration for Chakrubs, whether it’s really a good idea to keep crystals in the bedroom, and what a one-of-a-kind rose quartz diletto can do for a woman’s soul. Our conversation has been condensed and lightly edited for clarity.

What is the Chakrubs origin story?

I was living in California, and I was working at a sex toy shop. I actually took this job at a sex toy shop to be around people that had really good attitudes about sex, because I felt that I had some hangups when it came to sex that I wanted to get over. Anyway, working at the sex toy shop, I didn’t feel attracted to any of the toys there. At the time I was working there, I also had been living with a young spiritual teacher, and he would teach me everything about crystals. One day my spiritual friend was invited to this woman’s house who had a really large collection of crystals and I tagged along. This woman brought out one of her prized collection crystals, it was a smoky quartz wand. And I just blurted out, “That would be a great sex toy!” I was formulating in my head why that resonated with me so much, and I thought about the chakra system and about how everything that had been holding me back from really enjoying lovers in the past was because of energy. Everything that I had been learning just clicked.

I’m really curious about how you came up with the design for each of the products. What has that process been like and where do you source them?

The design itself came from that group of women that I met in Santa Cruz. They all sat down with pens and paper and drew up a design. I have many different ideas for additional products in the future, but the design now -- that simple, teardrop design -- a good friend of mine drew it. It was so simple and I felt that getting thicker at one end, smaller at the other end, would not only be versatile, but I felt like it would really work well for drawing the energy up also. The crystals themselves come from all over the world -- they could be from Arizona, China, Australia, Brazil. And then I have a couple of different lapidaries that polish and carve them. All Chakrubs are created by the mother stone, so there’s a big stone that gets carved down into littler pieces. And so when somebody buys one, they're getting something that’s theirs first.

Can you tell me about the difference between each of the products? I know that they all have similar uses but different purposes.

First, I would like to say that people who believe in the power of crystals know that you can have any crystal and set an intention with it, and because they’re good conductors of energy, it could hold an intention. But rose quartz, the Chakrub heart, is really good for opening the heart chakra to all types of love: platonic, brotherly, unconditional, romantic, erotic love. Then the black onyx, which is one of my favorites, is said to release negative associations or negative emotions or blockages. The white lotus is a good conduit to spiritual realms and it’s also good for filtering out distractions, so if you’re somebody that has trouble quieting the mind during sex or you have a lot of worries, that’s the one that I recommend. The indigo is the blue Chakrub, and it’s really good for creativity and communication; if you’re somebody that isn’t very creative with sex or has trouble communicating what you want with a partner, that’s the one to go to. Then we have the Indian jade, the green Chakrub, which is said to promote love later in life but also promote good opportunities and more luck in love. And then the sacral Chakrub is associated with our sex chakra, so it’s really good for energizing that whole area and really getting in tune with your own sexual nature.

What benefits have you seen in your own life not only from using these products, but from creating them and being able to share them with other people as well?

That’s what I love, because for me, the company itself and how it’s growing is parallel with how I am growing and learning as a person in my own life. The main thing about Chakrubs is to feel independent, to feel empowered. When I first started with Chakrubs and the practice itself I did not know what to expect. Now I really do believe that when Chakrubs comes to you either physically or just in awareness, it can really mirror the relationship that you have with sex and yourself. When I started to use it, I had a lot of thoughts in my head, insecurities for myself, and feeling like I’m an insane person using crystals. But that’s when I realized what I have to do is to trust myself and hold the intention that I’m learning. I have a boyfriend, and I feel very, very connected to him, more so than I’ve ever been in the past. The first night that we spent together, I felt his energy just coming through his chest. I became really, really sensitive to these energies. I feel with my relationships from when I started with Chakrubs to now, they definitely have gotten better and better and better. And now I’m in something where for the first time in my life, I understand that love is an art form and I have to practice it.

I didn’t ever really think about it. I don’t think so, I think that because of the weight, I guess?

It’s a completely different texture, I would assume.

It’s not a silicone toy, it’s not vibrating, but it is completely smooth.

You said it conducts temperature well. Wouldn’t it be cold?

A lot of people have that question. If you’re in a place that is cold, it’s going to feel a little cold but it warms up so quickly to your body. It is cold a lot of the times at first, but that gives you the opportunity to hold it close to you before you treat your desire like a headache that you have to get rid of right away. It allows you to hold it close to you, to warm it up, to bond it to your body, and it does warm up. You can always just run it under warm tap water before you play.

I once heard you’re not supposed to store crystals in your bedroom because they can be too powerful. Does that apply to your toys? Where is the best place to store a Chakrub?

You have to feel yourself and go with your own thing. I used to keep a bowl of crystals by my headboard and I couldn’t sleep. I think that everybody has different levels of sensitivity and different crystals are going to feel more intense than others. I would never say “don’t have crystals in your bedroom.” I love having crystals in my bedroom, I think they really help the energy, and Chakrubs can be placed just as any other crystal to help the energy flow in your bedroom. But that being said, if you’re a person that is super sensitive to subtle energies, then don’t have it in your bedroom. Have it somewhere where it could be on an altar somewhere else in a meditation room, something like that.

What else do you want people to know about Chakrubs?

I love to reiterate that these properties of the crystals, they’re passed down from many, many generations. A lot of people will say, “That’s bullshit,” about these crystals. I like crystals because it’s something tangible that I can touch and I myself feel a vibration in the crystal, that’s my belief. Some people say it’s a placebo. If it is a placebo, it’s still helping. There is science to crystal energy. That being said, all the properties of the crystals, they’ve been passed down for thousands of years, so I do think that whatever intention we hold, the crystals will just help amplify that. Sometimes I feel if you’re picking a crystal, you should go flat out on intuition and not necessarily read about what it does. Go off of your intuition and you will never be steered wrong with what you pick.