"The Jinx's" finale stunned us all. Here are seven other documentaries to pique your interest 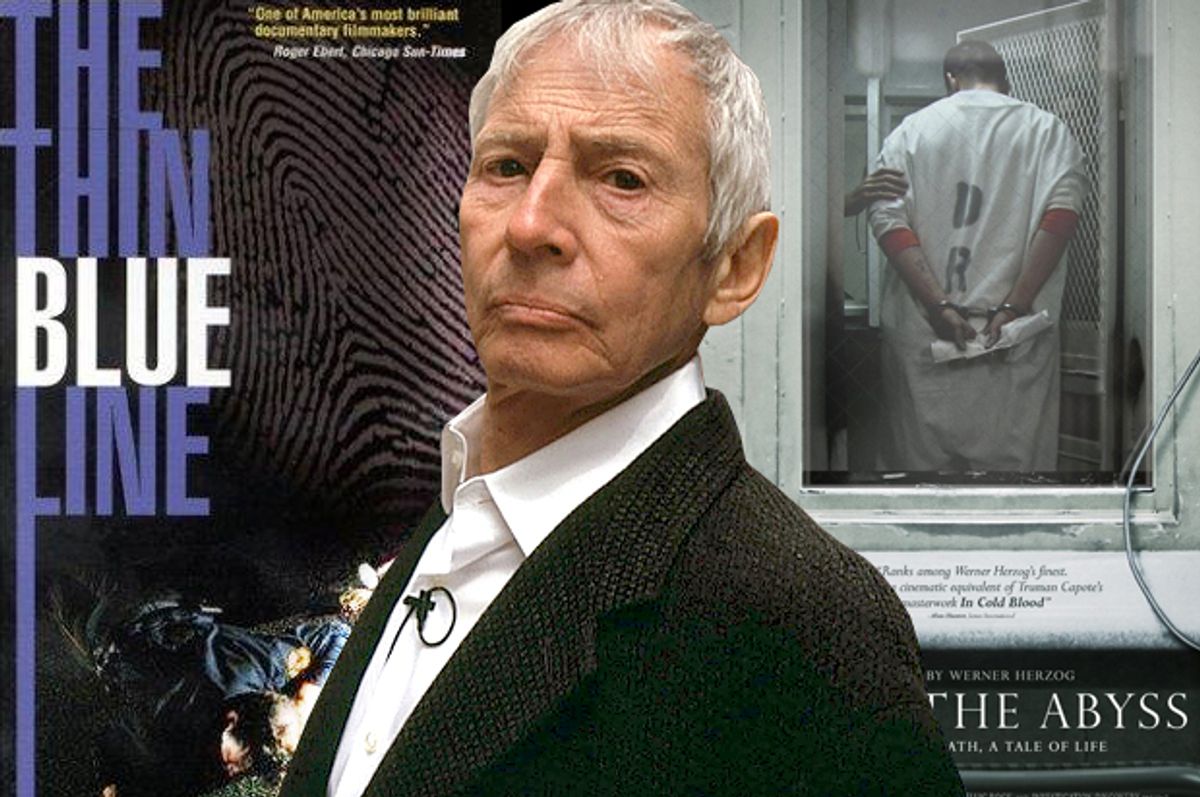 If you've spent any time on the Internet today, then you know that people are freaking out about the final episode of HBO's docu-series "The Jinx," in large part owing to what was maybe the most insane hot-mic utterance of all time.

Following on the heels of last year's Serial sensation, "The Jinx" has lured the general public even further into the world of quality true-crime documentaries, a genre ordinarily populated by basic-cable shlock. Filmmaker Andrew Jarecki’s masterful interviewing stirred up an agonizing storyline and has already left the public craving more chilling true crime.

So, to fuel that twisted addiction, we’ve collected the following list of critically-acclaimed shock-umentaries available for immediate streaming:

This Eroll Morris-directed indie is a 30-month investigation into the life of Randall Adams, a man sentenced to life in jail for murder. Morris was struck by the fact that Adams had no criminal history to speak of prior to the case and was compelled to reopen it with "The Thin Blue Line." Speaking to the director's knack for directing true crime documentaries, Roger Ebert said back in a 1988 review:

"Morris is much more interested in the spaces between the facts than with the facts themselves. He is fascinated by strange people, by odd word choices and manners of speech, by the way that certain symbols or beliefs can become fetishes with the power to rule human lives."

The bleak film from Warner Herzog (who brought us "Grizzly Man" and "Encounters at the End of the World") takes a look at a 2001 triple homicide in Conroe, Texas, and the death row inmate convicted of the crime. Herzog interviews people from all sides of the story -- including law enforcement and corrections officers -- to cut to the core of the criminal justice system.

A 36-year-old Long Island mom killed herself and seven others after driving the wrong way on New York's Taconic Parkway. Autopsy results revealed she had a 0.19 blood-alcohol level and had smoked marijuana that day. The title of the film -- "There's Something Wrong With Aunt Diane" -- was also a frantic text message sent from the mom's 8-year-old niece to her father before the car struck a sport-utility vehicle and took her life.

Two filmmakers examine the real-life, walking incarnation of a boogie man called "Cropsey." Children of Pennsylvania and New Jersey cited him in campfire stories, described as a monster who lived in the woods and abducted children. A man named Andre Rand, who is the focus of much of the documentary, was convicted of kidnapping in connection with the murder of one such victim.

French filmmaker Jean-Xavier de Lestrade's high-stakes courtroom drama dives into the story of a woman found at the bottom of her North Carolina mansion staircase. She was the wife of the novelist Michael Peterson -- and speculation swirled around whether she had fallen or Peterson, himself, had something to do with it.

Available: Amazon and iTunes by purchase

"Dear Zachary" tells the gripping story of Andrew Bagby, a man allegedly killed by girlfriend Shirley Jane Turner, who would later give birth to their child, Zachary. Bagby's parents were able to get full custody of the child Zachary, but after Turner was released from jail, she outsmarted the flawed Canadian legal system and won him back. A TV miniseries adaption of this 2008 documentary is already underway.

"The Iceman Tapes: Conversations With a Killer" (1992)

The Iceman Tapes is a series of interviews from Richard Leonard Kuklinski, a serial killer who notoriously froze his victims. In one interview, Kuklinski reflects on his 30-year killing spree and confesses to killing more than 100 people. The interviews examine the killer's childhood, too, as an explanation of how being a target for bullying escalated to the point of crime.