Get rid of your dumb K-Cups

They're expensive, environmentally disastrous and they're taking the fun out of coffee 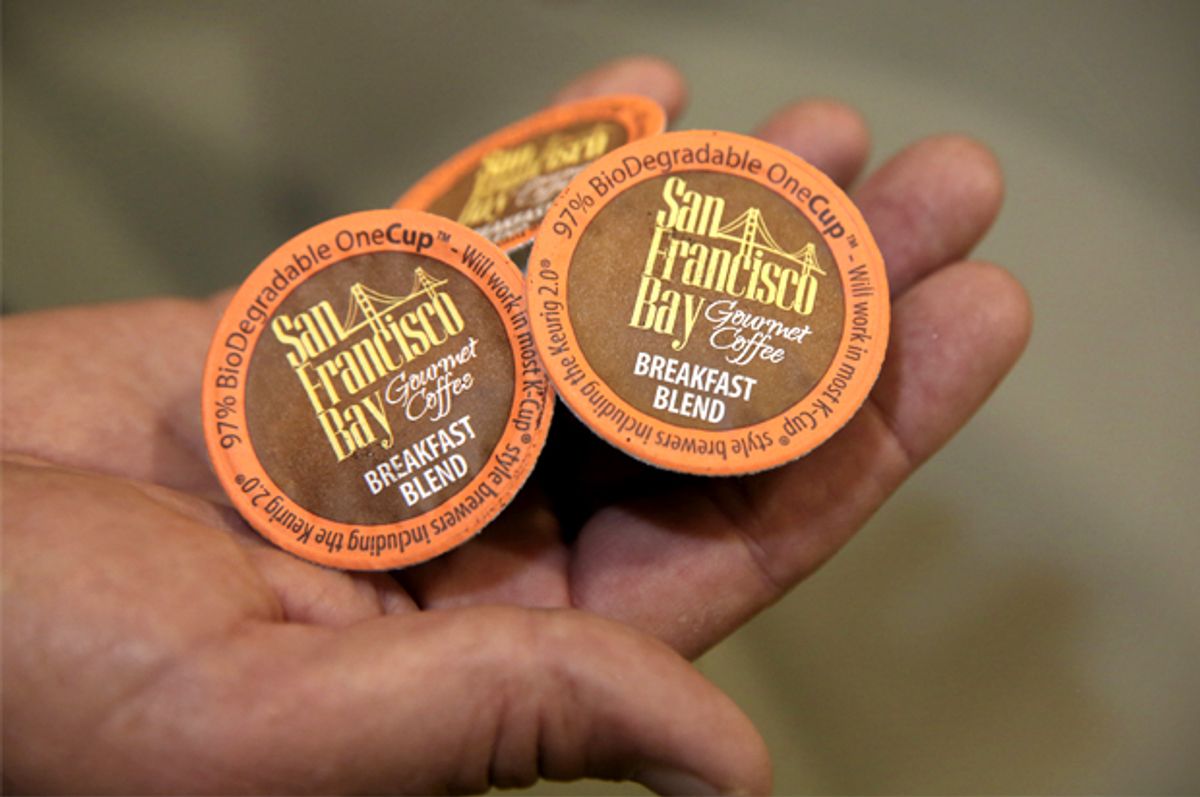 You can still be a coffee achiever. You can still have entire conversations about the full body quality of a French roast. Just please, for God's sake, reconsider your stupid K-Cup.

It's been decades now since coffee was a mere side note to breakfast, a warm pick-me-up to be poured from the old percolator or grabbed from a diner that sells it in cups that declare "We are happy to serve you." Sometime in the nineties, while we were all reading the Starr Report, a Starbucks opened every twenty feet across the US. (You think I'm exaggerating? There are four Starbucks located inside the Herald Square Macy's alone. FOUR.) Now, there are fancy coffee trucks outside your office; there are espresso machines at your manicurist's. The merits of the Chemex over the French press can spark more furious debate than whether that dress was white or blue. We Americans love our coffee like we love our guns and porn. Which is to say, a lot.

But a few years ago, the caffeinated landscape changed forever when the Keurig landed. Simple and efficient in its design and purpose, the Keurig was built to brew and dispense coffee one precisely made portion at a time. Pour in the water, pop in the K-Cup, press a button, and blammo. No more having to make a whole dumb pot for the entire marketing department. No more marriage ruining arguments about how I can't believe you didn't make decaf when you know regular coffee makes me too jumpy. Instead, you could make a raspberry chocolate truffle blend for yourself, a Sumatra dark for a friend, even a lemon zinger tea for another friend! The K-Cup was defiantly individualistic, like America itself, goddammit. And it was a hit. According to a Tuesday Associated Press report, today "more than one in five U.S. households has one of Keurig's single-serve coffee makers."

Yet as the owner of an erratically used Mr. Coffee with a wonky lid, I admit I never quite got what the fuss was about. I first encountered the Keurig while visiting friends for the weekend four years ago. It was the same year the brand hit big -- and doubled in sales. On my hosts' kitchen counter sat a gleaming carousel of brightly colored pods, neatly ready to be spun and called for morning duty. I remember the coffee itself tasted okay, but the experience was somehow cold and impersonal, as if I'd found an individually wrapped bar of soap in the bathroom. Hanging out in a friend's kitchen is supposed to be a communal pleasure, not a medicinal exercise in caffeine distribution. Where, in all of this, was the best part of making coffee – the warming top off that compels you to linger a little longer over the cup?

Since that fateful weekend, I've encountered the Keurig several more times, but never once felt an urge to join the cult. I'm not a huge coffee consumer anyway, and it seemed to me the caffeinated equivalent of an e-cigarette – an instrument of vice somehow stripped of all the joy of said vice. And lately, a recent spate of news stories has revealed an even darker side to those convenient little cups.

In January, a Cloverfield-style action packed video called "Kill The K-Cup" appeared, offering the staggering statistic, "In 2014… there were enough discarded K-Cups to circle the earth 10.5 times" and serving a vision of a monstrous invasion of planet killing cups. Then a March Atlantic feature by James Hamblin further laid out the staggering environmental threat the "still not recyclable or biodegradable" cups pose, particularly in the wake of a multibillion dollar industry that recently partnered with Coca Cola to expand the mission to have "a Keurig brewer on every counter and a beverage for every occasion." You know you can get water from the kitchen faucet, right? It goes with everything! And it's free! Contrast that with K-Cups, which will get you "standard coffee grounds for around $40 per pound" – and from a company that vows it should be able "to create a fully recyclable version of its blockbuster product" by 2020. That's five more years of garbage piling up. But as Hamblin points out, the K-Cup method does have other merits. It uses less electricity than a conventional coffee maker, and can extract grounds more efficiently, leading to less waste of the coffee itself – a product that often comes with its own set of ethical questions and problems.

In the Atlantic feature, K-Cup inventor John Sylvan admits he doesn't own a maker. "They're kind of expensive to use," he says, "Plus it’s not like drip coffee is tough to make." It's not. It even has little lines on the pot if you want to make a single serving. When I want coffee, I too still prefer my cheap coffee maker and a few scoops of a nice dark roast. But even better – when I feel like making a quick, individually portioned beverage that doesn't cost $40 a pound and make me scared for the environment, I reach for something else. It's called a tea bag.