"Not true and they knew it”: What Rahm Emanuel's Wall Street craze cost Chicago 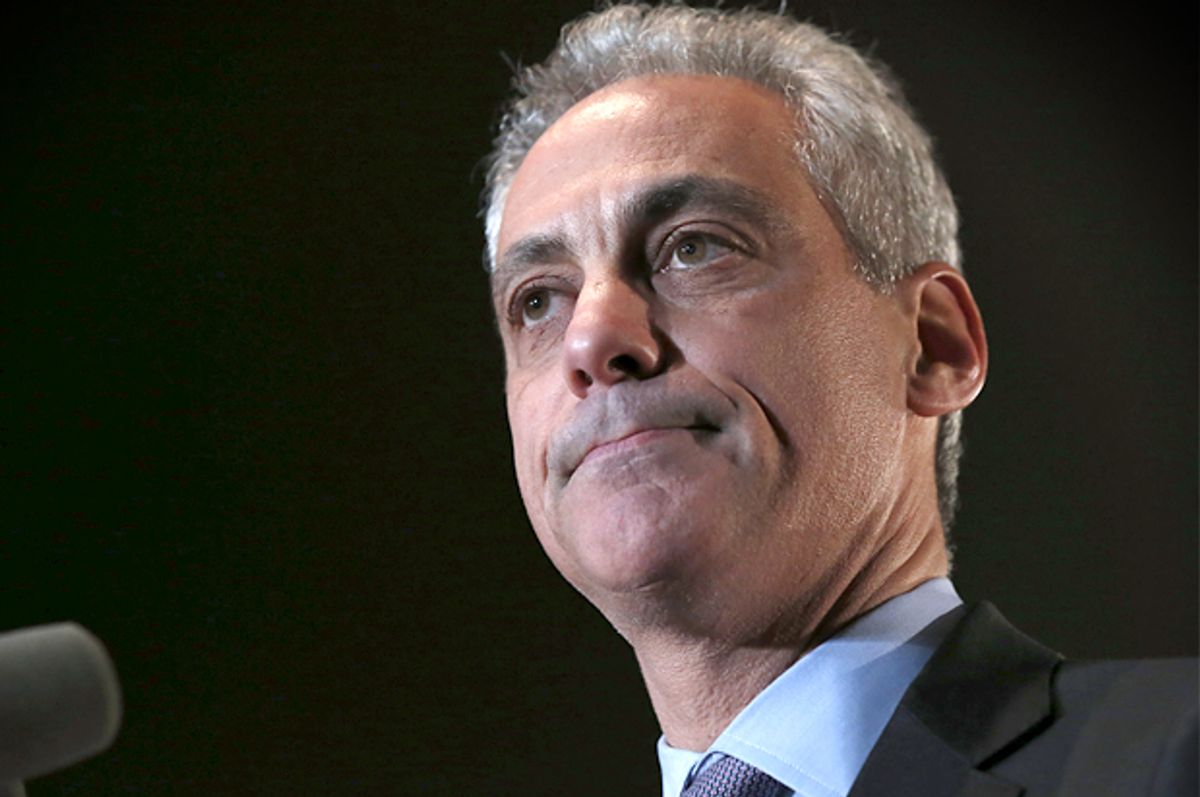 The city of Chicago and its public school system could recoup potentially billions of dollars in overpayments from complicated, unjust deals inked with Wall Street banks, if they pursued legal action or demanded enforcement from federal regulators. But Rahm Emanuel, the current mayor, has refused to chase this opportunity, despite the city’s drastic fiscal outlook and the effect on citizens. By contrast, his opponent in the April 7 mayoral run-off election, Jesus “Chuy” Garcia, appears far more likely to take action against a powerful financial sector Emanuel has relied on for campaign contributions.

Beginning over a decade ago, Wall Street banks sold municipalities, school districts, water systems and public hospitals across the country on obscure financial instruments, pitching them as a way to borrow more cheaply than plain-vanilla municipal bonds. But just as homeowners were swindled into loans they couldn’t afford during the housing bubble, local governments suffered a similar fate.

For example, cities issued variable-rate bonds called auction-rate securities, which reset interest rates, sometimes on a weekly basis, based on the lowest rate investors accept for the bonds at auction. After the financial crisis, these municipal debt auctions collapsed, triggering penalty interest rates as high as 20 percent. Though many borrowers had insurance, the crisis wiped out the bond insurers as well, offering no relief.

Banks offered an escape hatch from volatility, selling cities on derivatives called interest rate swap agreements. Investment banks would trade payments with cities, paying an indexed floating rate while cities paid a fixed rate. But when interest rates crashed, cities ended up with far higher fixed payments. The swaps locked borrowers into overpayments for up to 35 years, just as they felt severe financial distress from the Great Recession.

A growing group of public interest activists, lawyers and experts believe that Wall Street violated securities laws by failing to disclose risks on these instruments. “The banks made a fundamental representation, that it was a cheaper way to borrow,” said Brad Miller, a former Congressman and Of Counsel at Grais and Ellsworth, who has focused on these deals. “That was not true and they knew it.”

Chicago was a serial user of this type of exotic borrowing. The Chicago Tribune found that between 2003 and 2007, Chicago Public Schools (CPS) issued $1 billion in auction-rate securities, more than the entire state of California. Goldman Sachs wrote in a letter to CPS that the deals had “no downside.” But over the life of the auction-rate securities, CPS will pay $100 million more than they would have on fixed-rate bonds.

That’s just a sliver of what Chicago financed with Wall Street. “The Tribune investigation was on auction-rate securities,” said Saqib Bhatti, director of the Roosevelt Institute’s ReFund America Project. “There are only four of those. CPS has 10 or 12 other swaps, and the city of Chicago has 25 more.” Banks like JPMorgan Chase, Bank of America, and Deutsche Bank made the deals with the city.

ReFund America estimates that the City of Chicago and Chicago Public Schools have already paid $1.2 billion on swaps, and roughly $106 million annually since 2008. For context, last year Chicago closed nearly 50 schools in underserved areas, for a total savings of only $25 million a year.

Like an underwater homeowner, cities cannot refinance the swaps: the only way out is to pay termination fees, which represent the net present value of all future payments. Wall Street basically lied to Chicago and other cities to trap them, with no escape from the predatory terms.

But advocates list several remedies. First, cities could sue the banks, alleging misrepresentation under state and federal “fair dealing” rules. Illinois state law does not apply any statute of limitations on cities filing claims, so everything Chicago financed would be applicable. Chicago could also file an arbitration claim with the Financial Industry Regulatory Authority (FINRA), which handles disputes over market integrity rules for public finance. The Baldwin County, Alabama sewer system successfully used an arbitration process to force RegionsBank to return all their swap payments. Arbitration does have a six-year time limit, but it’s unclear exactly when the clock starts ticking.

Finally, the Securities and Exchange Commission (SEC) has authority to enforce fair dealing rules against Wall Street banks, disgorging their ill-gotten gains to affected borrowers. Chicago could pressure the SEC to finally undertake an enforcement action on behalf of borrowers, the same way they have on behalf of investors. There’s evidence that Bank of America violated fair dealing by failing to tell CPS about an auction-rate securities market meltdown. ‘This is a totally egregious violation,” said Marcus Stanley of the coalition Americans for Financial Reform. “If the SEC doesn’t take action, the signal is dealers can go hog wild to mislead you in any way they want.”

The Emanuel Administration did not negotiate these deals, but their public statements have been meandering. First, Chicago Public Schools professed to the Chicago Tribune they suffered no losses, a claim experts found risible. Then CPS argued they received sound financial advice on the deals that had unforeseen consequences, a seeming contradiction. “They said, if you understood these transactions, you would know how these risks were inherent to them,” said Marcus Stanley. “If that’s the case, how did you fail to foresee it?” Incidentally, David Vitale, the man who purchased all those auction-rate securities at Chicago Public Schools, got a promotion under Emanuel, becoming president of the school board.

The city responded to union-led demands for legal action against bank dealers by having a former enforcement chief for the SEC’s Chicago office conduct a full review of the option. The review concluded “there’s no claim to be filed.” The Mayor’s office also provided Salon this statement:

“Mayor Emanuel inherited a debt portfolio of $20.3 billion heavily weighted in variable rate bonds and swaps. Since day one in office, as part of his efforts to right the City’s financial ship, the Mayor has aggressively taken steps to manage this portfolio, including terminating 7 swaps totaling more than $1 billion and renegotiating another 12 swaps valued at $1.3 billion, substantially reducing taxpayer risk resulting from these inherited swaps.  The City has also not entered into any swaps on any new debt.”

ReFund America’s Saqib Bhatti notes that the city paid termination fees on those close-outs. “You’re not reducing the risk, you’re realizing the risk,” he said. Also, while the Emanuel Administration may not have made swap agreements on new debt, they did enter into at least four interest rate swaps on top of the old swaps, layering risk on top of risk.

Emanuel has publicly stated that it’s simply too late to recoup any money from bad swap deals, because “there’s a thing called a contract.” Of course, Bhatti and his colleagues allege there was a breach of contract, which can trigger legal remedies. In addition, “the same administration so quick to say a contract’s a contract was quick to throw the teachers’ contract out the window when they had a chance,” Bhatti said, referring to a bruising 2012 city teacher’s strike and Emanuel’s proposal to cut retirement benefits. “To them, a deal’s a deal except when it’s not.”

The swap problem became more acute when Chicago received a ratings downgrade last month from Moody’s to Baa2, just above junk status. This triggered an immediate $58 million in termination payments on four interest rate swaps. If the rating drops one more notch, it activates another $39 million in triggers, and $90 million more on the next downgrade. Combined with CPS downgrades, over $400 million could come immediately due. The city said earlier this month that they reached agreement to avoid $20 million in payments, but it’s not clear whether that money has been eliminated or merely delayed, with the swap remaining in place.

Ex-Congressman Brad Miller believes that Chicago doesn’t want to pursue legal action because the administrators who made the deals all still work for the city. “It requires the city finance people to say we were played for chumps,” Miller said. “They would have to admit their own mistakes.”

And then there’s the issue of Emanuel’s ties to Wall Street. Investment bankers, including those managing city pension funds, have delivered millions of dollars to Emanuel’s re-election campaign. While the Mayor’s office insisted Emanuel would pursue any opportunities to save taxpayers money, highlighting an ordinance to protect tenants in bank-owned foreclosed properties, advocates frustrated by the inaction on swaps remain skeptical. “This requires taking on the most powerful interest group in the country, which has been an enormous support for Rahm,” Brad Miller said.

Chuy Garcia has not explicitly said he would take action over interest rate swaps and other municipal finance deals. His recent fiscal sustainability paper released last Friday referred to the debt downgrade triggers, but not whether he would seek a lawsuit, arbitration or SEC enforcement.

However, Garcia is backed by the Chicago Teachers Union, which has actively agitated for fighting the swaps. The Mayor in Chicago appoints the entire school board, and the current group completely opposes making claims. Garcia could never count on reimbursement from the swap deals in the city budget, but he could appoint new school board members willing to take a harder line.

Some cities have tried to act. Oakland and Los Angeles filed city council resolutions to renegotiate swap. Others moved their money away from banks that ripped them off on borrowing. Overall, success has varied; you typically don’t hear about the cases where banks give back money, because they settle them confidentially.

But a big city like Chicago, which does billions in business with Wall Street annually, adding their voices to the chorus could make a huge difference.  “We need to have a large movement of cities taking legal action against the banks,” Saqib Bhatti said. “Public officials throw their hands up and say there’s no options but to cut services. We have to split the narrative, and put these deals back on the table when there is unethical and illegal behavior.”

Update, 3/17/15, 10:30 am: An earlier version of this story said that the Baldwin County, Alabama sewer system used the FINRA arbitration system to win awards on swaps deals. They actually used a separate arbitration process through the American Arbitration Association. The relevant sentence has been updated.